Are we entering a new Orange Age of bumper stickers? 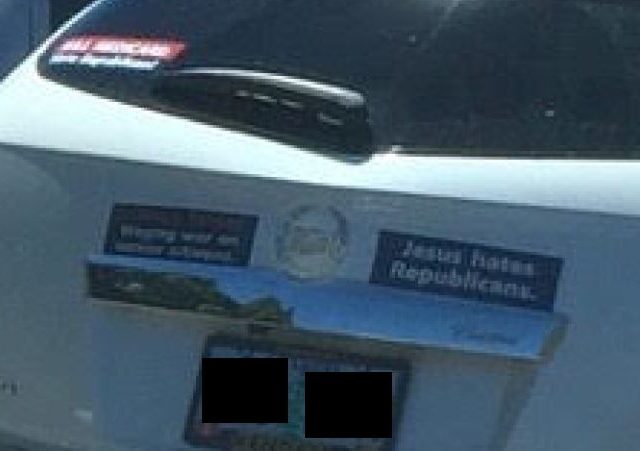 Bumper stickers used to be a regular feature here.

If you want to scroll through memory lane, try our Bumper Sticker tag. Or better yet, go to our earliest bumper stickers and relive history, like the very first bumper sticker we ever ran: 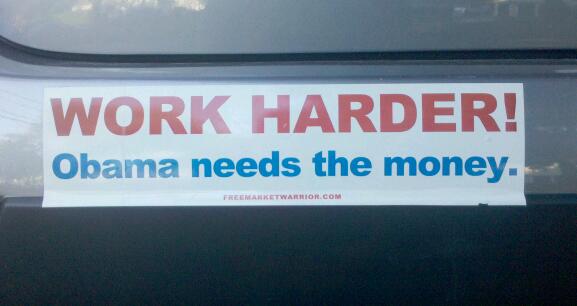 The 2012 presidential year was a particularly, um, bumper crop. And Obama generally was the man who made Bumper Stickers Great Again.

In the past year, despite all the Trump Derangement Syndrome, readers haven’t sent may bumper stickers, much less ones worth running. So maybe this is a sign that things are changing.

Oregon Mike, who has sent many wonderful bumper sticker images, sent the image above. It’s somewhat hard to make out, except for the one on the right that says “Jesus hates Republicans,” so here is his explanation:

The one on the far left says, “Kill Medicare – Vote Republican!”

The one to the left of the medallion says, “Donald Trump – Waging War on Senior Citizens.”

Note that the vehicle is a Cadillac.

As you know, Eugene is in Lane County, Blue State Oregon, unlike Harney County. However, only the precincts in and immediately surrounding Eugene, plus one up the McKenzie River inhabited by rich transplants, voted for Hillary. The rest of the county, which is roughly the size of Connecticut, is red.

Anyhow, greetings from our asylum to yours.

Are we about to enter a new Orange Age of Bumper Stickers?

I’ve missed the bumper stickers. I’d contribute to get it going again, except I live here in the middle of Deplorable Country (the sane asylum), and about the only bumper stickers you see here are ones like ‘My Other Gun Is A Smith & Wesson”.

And “Warning: Driver Only Carries $20 Of Ammunition”.

Heh. I have both ‘Molon Labe’ and ‘Driver Only Carries $20 Of Ammunition’ on my pickup bumper.

How serious you are about defending yourself depends on how much you paid per round.

Perhaps it’s due to the demise of the Democratic Party??

A guy in my neighborhood drove a car with the words “Buck Fush” painted on the back of his beater car.
Get it? He really hated the Bush family I guess.
Now he has a new car, with a personalized plate that reads “DAMA8O.”
Took me a while to figure it out, but it looks like ObamaD but backwards.
What a clever guy.

When he finally begins to save some money and gets into a higher tax bracket it may eventually read MAGA16. We can hope for change… fortunately after 8 years we finally are getting hope and change.

I think that conservatives who are in enemy territory have figured out that the stickers give the surrounding enemy targeting information. Hopefully, the enemy does not figure the same thing out.

I always looked at bumper stickers as fancy ways to say “Hey please key my car when you see it in a parking lot!”

I never put anything on my vehicle except the sticker I get from the local sheriff’s fundraiser. That never hurts.

Agreed, as to the targeting assistance. The first indication someone should have that you are an armed citizen is either that subtle click of the safety coming off, or the muzzle flash.

My truck has only one bumper sticker: “ARMY”. If they cannot put together that, the truck and the wrinkled, grey-back in it, they deserve what they get.

I have no stickers of any kind on my car. They don’t provide enough room to let people know what’s really on my mind.

You aren’t seeing as many bumper stickers because support for the Democratic Party is draining away and many Trump supporters are unwilling to subject their cars to vandalism. Thus, few bumper stickers overall.

Cars don’t really have bumpers any more (as in, chrome plated steel).
My across the street neighbors have a Prius and they have Obama stickers on the back hatch….All I can think is “You know that bumper sticker adhesive never really come off the paint”!

That was/is a fine car.

I remember that was exactly the car my Grampa had when I was a kid! His was a pale yellow, looked a lot like this – wish I had it now.

My all time favorite bumper sticker was:

Marching to a completely
different kettle of fish.

I have one that says “Cut the Cable, Toss the Console. Learn to Play Music Instead”. I’ve had many nice compliments.

When I’m not reading Legal Insurrection, I’m teaching myself to play the saxophone (or at the gym or the range).

Heh. Along with my 2A related stickers I have one about guitars and one about the blues. I play just about anything with strings, plus I’m a registered luthier. Mostly I make diddley bows and alt-design lap steel guitars.

The Oregon is a “Blue state” is an understatement par excellence; Portland, Salem and Eugene, and to a lesser degree, Corvallis, are all heavy subscribers to all things related to Socialism/Communism and the United Nations; however, all is NOT lost: once you leave the city limits, most of the rest of the state is hard-core “flyover country”.

Unknown3dParty, believe it or not, Benton County (Corvallis) was stronger for Hillary than Lane County (Eugene). I like to tease my OSU Beaver-rooting cattle ranching buddies in Eastern Oregon about this.

But you’re right about most of the rest of the state (gotta make exceptions for Bend and Ashland). We were deplorable before it was cool.

I have several here in TX.

“A taxpayer voting for Barack Obama is like a chicken voting for Col Sanders.”

Here is one from Captain Capitalism. Just got it in the mail and will soon be on the (heaven forbid) SUV.

“Lies are Free; The Truth is Gonna Cost Ya”