Eventually the records will be obtained. Eventually. 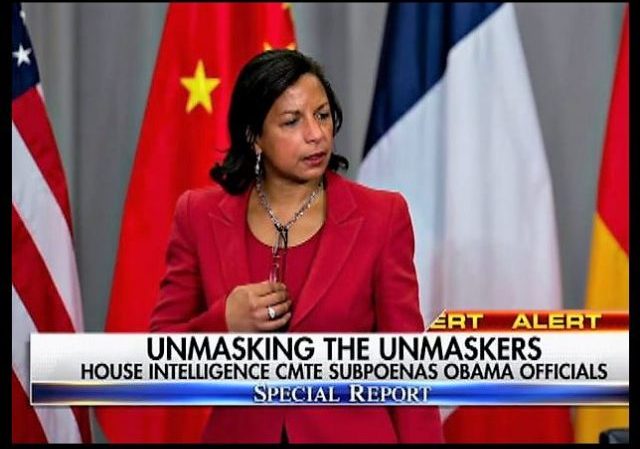 Susan Rice’s unmasking of names was the focus of a firestorm barely two months ago.

We wrote about the issue on April 3, Susan Rice unmasked? Previously said “I know nothing about” Nunes allegations, and the following day on her interview by Andrea Mitchell, Susan Rice: Sought unmasking but “absolutely not for any political purpose”:

Mitchell’s questions allowed Rice to confuse the issue by mixing unmasking and leaking, and also framing questions as to intent rather than the facts of what happened.

Rice did not deny unmasking names of Trump campaign and transition persons, but rather, refused to name names and went back into a defense of lack of bad intent.

“I received those reports, and there were occasions I would receive a report in which a U.S. person” … “and sometimes it was necessary to find out who that U.S. official was.” Rice didn’t dispute that sometimes she requested identification. She said intelligence community made decision whether to disclose the name she had requested.

“Absolutely not for any political purpose”

Rice said “I’m not going to sit here and prejudge” whether willing to testify before Congress, but later refused a Senate request to testify voluntarily.

Judicial Watch’s press release states, in part, that the records not only have been removed, they may be unavailable for 5 years:

Judicial Watch today announced that the National Security Council (NSC) on May 23, 2017, informed it by letter that the materials regarding the unmasking by Obama National Security Advisor Susan Rice of “the identities of any U.S. citizens associated with the Trump presidential campaign or transition team” have been removed to the Obama Library.

The NSC will not fulfill an April 4 Judicial Watch request for records regarding information relating to people “who were identified pursuant to intelligence collection activities.”

The agency also informed Judicial Watch that it would not turn over communications with any Intelligence Community member or agency concerning the alleged Russian involvement in the 2016 presidential election; the hacking of DNC computers; or the suspected communications between Russia and Trump campaign/transition officials. Specifically, the NSC told Judicial Watch:

The obvious response was that congressional investigators might need to get involved to get the records.

That may be easier said than done. The Washington Times reports Sealing and transfer of Susan Rice records angers House committee investigating ‘unmasking’:

House intelligence committee sources say career officials at the National Security Council are slow-walking the delivery of subpoenaed records on former National Security Adviser Susan E. Rice’s handling of classified information and the “unmasking” of Trump campaign workers — material from the Russian hacking probe that middle-level NSC managers claim was transferred to President Obama’s library and could “remain closed to the public for five years.”

One source, speaking only on the condition of anonymity, called the transfer curious and appeared to reflect an effort by former administration officials to obscure evidence on whether Ms. Rice and other top officials in the Obama White House illegally tried to identify which Trump campaign and transition aides had been caught up in the U.S. intelligence intercepts of Russian interference in the presidential race.

The two high-level intelligence committee sources told The Washington Times that they are confident the panel’s investigators, despite the delays, will eventually get their hands on the records shipped to a heavily secure archive for Mr. Obama’s yet-to-be-built presidential library.

No need to wait. Now we know.

As I’ve noted many times, due process is a process. It takes some processing…with time being a key part of the equation.

And the process is the punishment.

your Trump hate Syndrome becomes more and more apparent with each comment.
so sad to see a once sane person decline to such a degree.
find help soon.

i wish you a quick recovery.

Only a T-rump Deranged Sucker would find ANY T-rump commentary in what I wrote.

I’m a lawyer who tries civil litigation cases. They involve a LOT of time to bring to conclusion. Due process is what it is.

I hope you can get good, competent help with your delusions, that lead you to see what I have never said.

This looks a lot more like obstruction of justice than due process.

Why do I have a feeling that 5 years from now we’ll learn those records have been “misplaced” and nobody can remember where they went?
Oops!

Only if we allow the rats of the GOPe to continue to hold leadership positions in Congress.

Remember: the GOP impeached clinton. If that House was still around, rice, obama, et al would all be toast.

Tolerating the Crying Boehners will be our downfall.

notamemberofanyorganizedpolicital in reply to TheFineReport.com. | June 26, 2017 at 5:54 pm

Those RINOS are about to meet their ballot maker soon……..

Anyone who seriously believes those records will ever be released complete and unredacted is really…not cynical enough.

notamemberofanyorganizedpolicital in reply to mariner. | June 26, 2017 at 5:55 pm

They can get them right now by subpoena if a criminal case is brought.

Another question: just how hard will the investigators try to get these records? My guess: not very hard at all.

Plenty of time for Obama to sanitize or alter records before handing them over.

If his beard still lives with him, he might put them in michelle’s dinner bowl. She’ll eat anything.

I don’t really think there was much danger of the House finding anything useful in the next five years, anyway. And even if it did, what’s Congress going to do about Rice and her crime spree? No more than it did about Holder. Not a whole hell of a lot.

These claims are accusations of serious violations of civil rights. I.e., crimes, not mere political footballs. They should be handled by criminal investigators, not Congress. Don’t send a Congressman to do a policeman’s job.

So is the USA a country of laws, or a country of whatever perfidy the Filthy Party can get away with? That question should be answered, and answered now. The longer our Federal government fumbles these duties (and opportunities), the less likely that they will ever be addressed in the future.

Why not get copies from Russia or China.Or wait for Wikileaks.

Or from Seth Rich’s estate…….

Why not send Sandy Bergler to the Obama Library warehouse? He’s good at obtaining documents.

This is where Our President, can be so effective, start tweeting, that Mueller is a Dem shill, refusing to investigate the crime of leaking.
Dem shill, Mueller, allowing Obama administration to obstruct his witch hunt.

Of course all Republicans can refuse to talk about anything on camera, but, the Obstruction of the Obama administration, of leaked classified materials.
Republicans are in charge and have to power to focus on just the unmasking until they complete their investigation into the only crime that has happened.

“What unmasking documents are you talking about? I only heard about them recently, watching the news just like everyone else. There wasn’t a smidgeon of bad intent in the unmasking, if any actual unmasking occurred, which is being actively debated by some anonymous experts. Besides, we already released the unmasking documents, along with an updated original copy of my genuine, actual bith certificate. Mine was the most transparent presidency in history.”

Here’s what we do… we write up a fake set of these records that ‘proves’ Rice and others’ indictable actions and then ‘leak’ them to the Intel Committee investigation. The investigation then releases them to the media, reporting they are writing up indictments as we speak. The left goes freaking nuts because they have the real records and know our set is fake and in error. With a typical leftist knee-jerk reaction, they release the real records to prove our forgery wrong, leading to a collective ‘d’oh!’ from the left and a Nelson Muntz ‘HA-ha!’ from the right.

Now this is what obstruction of justice really looks like!

This is ALL kabuki political theater.

Congress did not want to “investigate” the actions of the Obama Administrations. And, they still don’t. When Nunes “broke” the Rice unmasking story [before he was disappeared] the FBI should have gotten these records and held them as potential evidence of a possible criminal act. Doing so would have caused no hardship to anyone, except someone engaged in a criminal act. Even Deputy Barnie Fife of Mayberry would have attempted to do that. Instead, these records get shipped off to a warehouse in Chicago on the Trump Administration’s watch. And, no one in the government cares about this. Except that it now provides a convenient excuse for the Congress to ignore this scandal because the can’t get the records easily.

Comey, though hated and mistrusted by Trump kept his position after the transition, probably at the urging of Trump’s advisers. When Comey begins making statements which might implicate Establishment lackeys from the Obama administrations, a new AAG is brought in and within a couple of weeks, that AAG drafts a compelling document asserting that Comey should be fired. Trump, wanting to do this since day one, does so. But, Comey, with visions of being shot dead in a police station basement by a bar owner, sends signals that he will not go quietly. This results in the appointment of SP Mueller [another Establishment company man] to “investigate” the bogus, and now totally discredited, Trump/Russia collusion narrative as well as claims that Trump “obstructed justice” by talking to Comey. Mueller is supposed to be the firewall against Obama Administration exposure. Comey meets with Mueller, probably to make a deal for the investigation to go away. When Comey is called to testify before Congress, he sends a clear message that if he goes down, so do a lot of other people in the Obama administration, by inferring that former AG Lynch obstructed justice to a greater degree than Trump did in the Servergate investigation. Now he has opened a huge can of worms, for the Establishment. And, action is taken to cover the Obama administration.

So, the whole strategy has changed from Get Trump to CYA Obama. Stay tuned.

Is it really legally possible for the outgoing administration to bury all evidence of wrongdoing in a presidential library? These are public records, not personal.