Rushing to politicize tragedy is never a good idea

Rather than reflect on how we landed at this juncture, these individuals rolled out the gun control mantra.

And of course, Governor Terry McAuliffe goes for more gun control as Republicans attacked say they had only baseball bats 2 defend selves

VA Gov Terry McAuliffe talking about gun control. "Too many guns," he says.

A GUN STOPPED THE SHOOTER. My God. 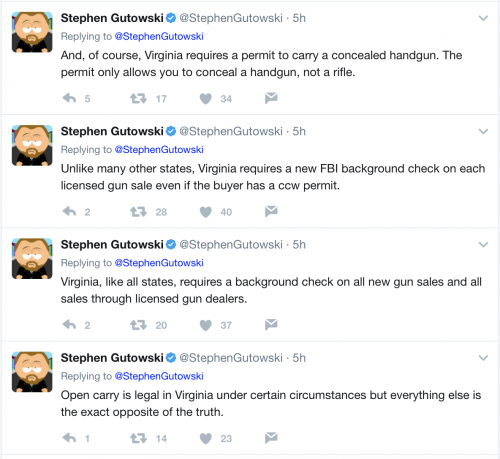 Leftists like to point out the NRA during these incidents:

Scalise took over $7000 from the @NRA last election cycle.

I hope he's ok and that this event changes his mind on gun control. https://t.co/sYpUczjqcm

Gun control is more important than showing respect and love:

Others chose to blame the Republicans:

If the Sandy Hook massacre had been GOP congressmen instead of children at school, we'd have had #GunControl a long time ago. #Alexandria

GOP: We gotta make sure this never happens again.

Some hope Scalise has scars and lifelong injuries because of who he is: 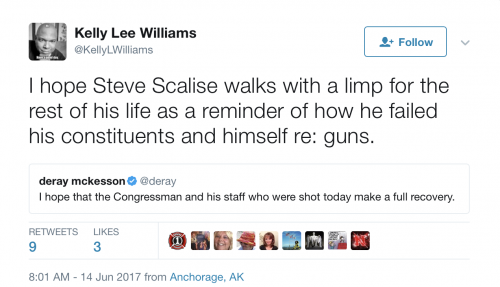 Tie it into health care to bash Republicans:

What a bunch of ghouls. (smh)

Frankly, I’d say they’re VILE human beings who were, obviously, raised by wolves rather than by nurturing families!

Sounds like the Left wants open warfare. For those who are of a historical bent, I offer Jose Calvo-Sotelo. He was the Conservative leader in the Spanish Parliament before the Spanish Civil War.

On the floor of the Parliament, he rhetorically handed the Socialist/Communist leader of the government his a** in a debate. The next day, the personal bodyguard of the Communist leader, two members of the Communist Assault Guards, and two members of the official police [Guardia Civil] went to Calvo-Sotelo’s house and kidnapped him from in front of his family. He was taken to a cemetery in town and shot in the head.

The government decided that despite multiple witnesses identifying who did it, they could not solve the crime.

That was one of several motivations that caused General Francisco Franco to bring the Spanish Army of Africa back to Spain and start the Spanish Civil War.

The Left denies the validity of elections if they lose. It only takes one side to invalidate electoral politics. They have made their choice.

I was thinking more of Charles Sumner and role he played in the Restoration.

“The FBI is trying to determine a motive…”

So, what exactly stopped this attack before the wacky leftie actually killed anybody?

One thing—a bullet. A nice, simple, effective solution. Waving the text of a few more silly gun control laws probably wouldn’t have had the same effect.

That’s really all there is to be said about this particular atrocity. Everything else is just a vain attempt to make it mean something it doesn’t.

To be specific, the *only* thing that kept this attack from becoming mass murder was two human beings with concealed firearms and both the training and the will to use them to defend the innocent. Yes, they were both cops, but they were *there* while the police officers who normally react to this kind of event were blocks away, if not miles. Police did not show up until ten minutes after the shooter opened fire, and those ten minutes would have been enough for the killer to have killed everybody he could see.

The lunatic left is fairly clear in telling us what they want. They want us all disarmed so that their goons can run roughshod over us. Fuck that and fuck them. Out of my cold dead hands.

But, Tom, the dispensing of that countervailing force was by an ‘authorized’ agent of the local political jurisdiction. You know, one who is highly trained, highly vetted, highly supported, highly recommended, highly competent, highly committed. NOT just a plain ordinary private citizen who of course has none of those attributes.

It couldn’t be the guy that lit and tossed the Molotov Cocktail?

The Left has been pumping out real hatred that has fueled this. It was the Left that spread thuggery during the campaign last year. The Kangaroo congressional hearings continue the drum beat. Are we to take President Obama’s advice and notch up the physical confrontation? Fortunately the guy was a bad shot and tactically poorly prepared…. this time.

Absolutely. Responsibility for this act lies squarely upon the doorstep of the progressives/the Left/Democrats who have been spewing hate, lies, and lunatic conspiracy theories, while at the same time failing to condemn the antifa violence that has taken place to date. A special condemnation should go to Kathy Griffin, the producers of the Julius Caesar play in NY, their ilk, and their supporters, for their subtle, and sometimes not-so-subtle, encouragement of violent acts against people whose only “crime” (and they actually believe its a crime) is to disagree with them on matters of government policy.

Once again, guns are the problem, and not the people who fomented the climate in which this attack came to fruition, and not the person nor the ideology that motivated the attack. I live in fear of the guns in my closet (and elsewhere in my apartment) that may suddenly become motivated to attack me for my support of Donald Trump.

It is time for Trump to articulate and implement a program to reestablish the rule of law:
Fire all of the damn Obama hold-overs. If they can’t be fired, let them report to a gym with chairs and no internet connections.
End sanctuary cities.
Investigate and prosecute Hillary, a known criminal who personifies leftist law breakers and who has the audacity to call for a summer of “resistance,” with all that implies. (Force the left to defend Hillary.)
Prosecute every thug who attempts to disrupt a peaceful protest.
Call out members of congress, including Republicans, who are hindering the building of the wall.
Demonstrate that crimes against whites for being white is racist, as if that should even be a question.
Dump Ryan and McConnell.
FIGHT BACK FOR GOD’S SAKE.

And when all of that happens, Rick, must as I agree with you, I’ll have long since passed into wherever. LOL

Another benefit of prosecuting Hillary would be to diminish the standing of the hordes of sycophants in DC who have made a living supporting the Clinton Crime Family.

Every single mass shooter over the past decade was wearing shoes. Clearly we must ban shoes. AND SHOELACES.

what about the loafer ban loophole?

Markos Moulitsas says, “Republicans are getting what they want.”

I’m trying to think of the term that describes these shining examples of human beings… I think it rhymes with “douchebag”. No, wait – it IS “douchebag”.

Reactions like the ones above only deepen the contempt I have for the left. Didn’t think that was even possible, yet here we are.

Serious question. Is there any substantive difference between modern democrats and ISIS?

At the moment, no.

Both hate Western Civilization, with a special animosity toward America, and want to tear it down.

Where they differ is in what should happen after America is destroyed.

Up to that point, they’re pretty much the same.

Also, the 2nd amendment is critical nowadays to protect ourselves from liberals.

Liberals: “Republicans should have to be re-educated.”
BLM: “Kill Whitey!”
Antifa*: “Bash the Fash!”
H. Clinton: “Basket of deplorables”**
ISIS: “The Great Devil [America] must fall.”

Yep. The need for 2nd Amendment protections may be greater now than ever before.

You forgot this one Archer –

“If they bring a knife to the fight, we bring a gun,” Obama said. “Because from what I understand folks in Philly like a good brawl. I’ve seen Eagles fans.”

Antifa–Masters at shouting down any opposing point of view, threatening violence at every turn, and in short acting like a bunch of the most “fascistic” people out there.

So I guess the progressives were correct – American homegrown terrorists can sometimes be as dangerous as Islamic Jihadis. And what were the odds that they would provide the John Brown wannabe example…

I suspect that this shooting will have the opposite effect that the scum that use every shooting to tout gun control will like.

I suspect that more people will buy guns and learn to use them to protect themselves and their families.

Sometimes using the same tactic long enough works. Sometimes it is so obviously phony that it is just tiresome and boring and not worth a listen. The Dems may well be at that point.

Research – real, honest-to-God research – has shown that more than 90% of the mass shootings, public shootings, and attempted shootings have been committed by Democrats! The problem is obviously not guns; we need to ban Democrats, or at least institute meaningful, common sense Democrat Control!