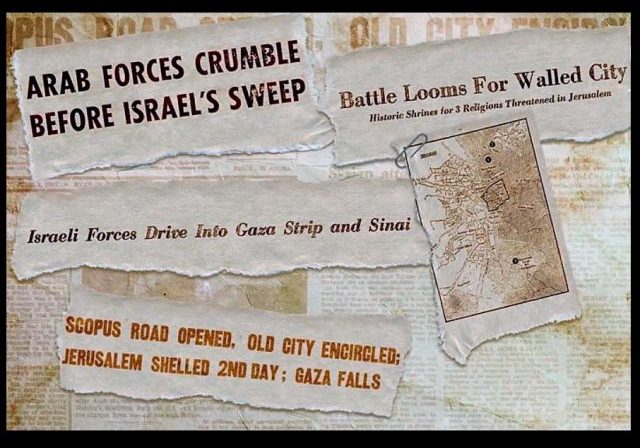 Note: This is the second in our daily re-created coverage of the Six-Day War, which will run through Saturday, June 10. Prior posts: 50th Anniversary of Six-Day War: The Eve of War; Six-Day War Day 1 — War Begins.

Yesterday, a surprise aerial attack on the Egyptian Air Force set the stage for some impressive military gains by Israel against her enemies in this second day of fighting.

The Egyptian armed forces are now in retreat as the IDF continues to “smash deeply into the Sinai.” Gaza has also been captured by the 7th Armored Brigade led by Major General Yisrael Tal, and shells from there have now stopped falling on the beleaguered Jewish settlements lining that border.

Over the last 24 hours the IDF has fought its way to the gates of the Jordanian-held Old City in Jerusalem.

Joined by the Jerusalem Brigade, the Paratrooper Brigade under the command of Major General Mordechai Gur is now controlling all the neighborhoods and towns surrounding the Old City (the troops avoided using any armor or artillery in order not to cause damage to the area’s holy places). 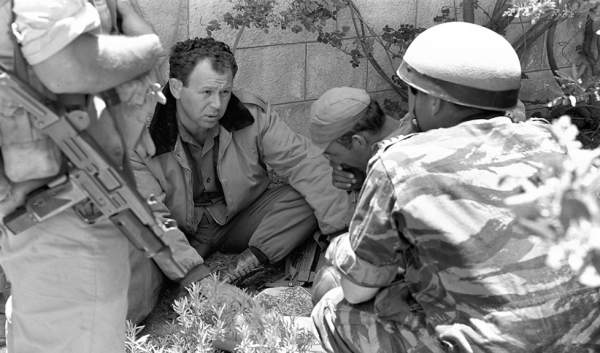 Faced with a continuous barrage of rocket attacks, there was no way of protecting west Jerusalem except by capturing outlying positions deep in Jordanian territory. That’s now been accomplished—Ramallah has fallen and the Harrel 10th Brigade under Major General Uri Ben Ari’s command just entered Qalqiliya without any shots even being fired.

With the Jordanian Armed Forces retreating, the residents of Jerusalem are tonight beginning to emerge from their bomb shelters to assess the damage to their city.

There’ve been hard-fought battles today in and around Jerusalem—especially at Ammunition Hill in the north. But now Israel’s elite paratroopers are perched on Mount Scopus overlooking the Western Wall and the Temple Mount. There, they’re waiting to hear whether they’ll be given the go-ahead to reclaim Judaism’s holiest sites from an illegal and immoral Jordanian occupation.

Egypt Blames the US and UK for Its Military Losses

Belligerent Arab governments started this war with weeks of aggressive and provocative escalations.

Now it’s pretty obvious that their militaries are performing poorly.

But that isn’t stopping them from shamefully continuing to foist onto their gullible publics more bogus claims about battlefield wins, many of them laced with vile antisemitic undertones: 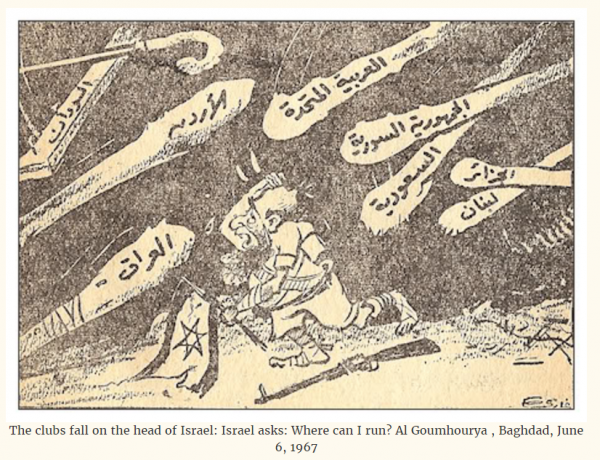 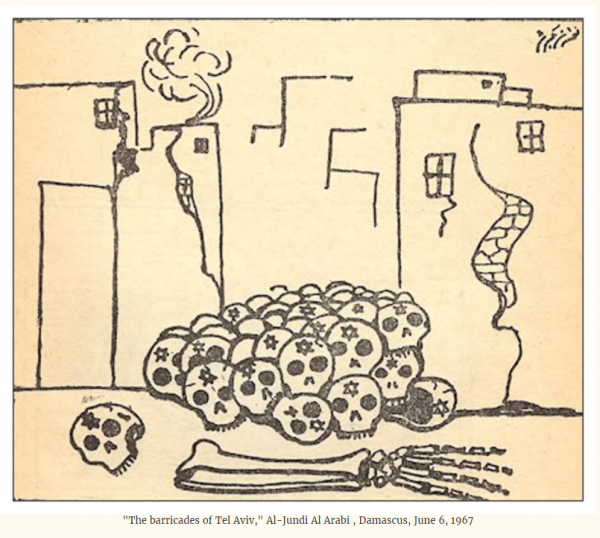 Radio Cairo is even broadcasting in Hebrew that Egyptian forces are prevailing (we had a good laugh when we heard that in one of these broadcasts “Our forces charge on all fronts!” came out garbled in Hebrew as “on all brassieres”—note to the Egyptians: “chazitot” means battle fronts; “chaziyot” are bras).

Radio Cairo also broadcast Hebrew language propaganda. Not always correctly. "Our forces charge on all fronts" came out "on all brassieres" https://t.co/H89Pd6RaiD

Still, given the magnitude of their losses, the Egyptian government and armed forces are finally beginning to admit to enemy gains.

Now they’re looking for someone else to blame.

Today Egyptian President Nasser accused the U.S. and Britain for setting his country up for a fall. He’s been spending the day lashing out at the Americans and the British, insisting that he has “conclusive evidence” of how they “turned the tide of battle” against the Arabs by assisting the Israelis with a “large scale air intervention.”

Arab radio stations are repeating these bogus charges (British Foreign Secretary George Brown has reportedly called it a “monstrous story” and US Secretary of State Dean Rusk says is “utterly and wholly false.”)

It’s obvious that Nasser wants to give himself an “alibi for the bad showing” of his country’s military. The reactions of an angry and frustrated public have been predictably ugly.

Furious mobs sacked the American and British consulates in Alexandria and set the US Embassy on fire (Syrian rioters also broke windows and caused extensive property damage to the American and British embassies in Damascus today too). Now, we’re hearing reports that Egypt’s Interior Ministry has ordered all Americans, including journalists, to leave the country immediately.

6.6.67 US embassies across ME under assault from mobs after Nasser and Hussein claim US collusion in Israeli strikes. #sixdaywar

So far, six Arab states have cut off ties with the U.S., believing in Nasser’s lies. Maybe they think what’s been happening over the last 48 hours is a repeat of the 1956 Sinai campaign, when French and British forces engaged alongside Israel.

But anyone believing that is deluded.

As Israeli PM Levi Eshkol publicly stated yesterday: “On the Israeli side there are only Israeli soldiers.”

The reality is that the U.S. and Britain have done little to help Israel. The US has declared its neutrality in “thought, word, and deed” and the British have stated that they “aren’t taking sides.” Meanwhile, instead of reigning in their Arab state clients, all the Soviets seem capable of doing is calling for a reversal to the gains that the Jewish state has managed to make in its stunning feat of arms over the last two days. 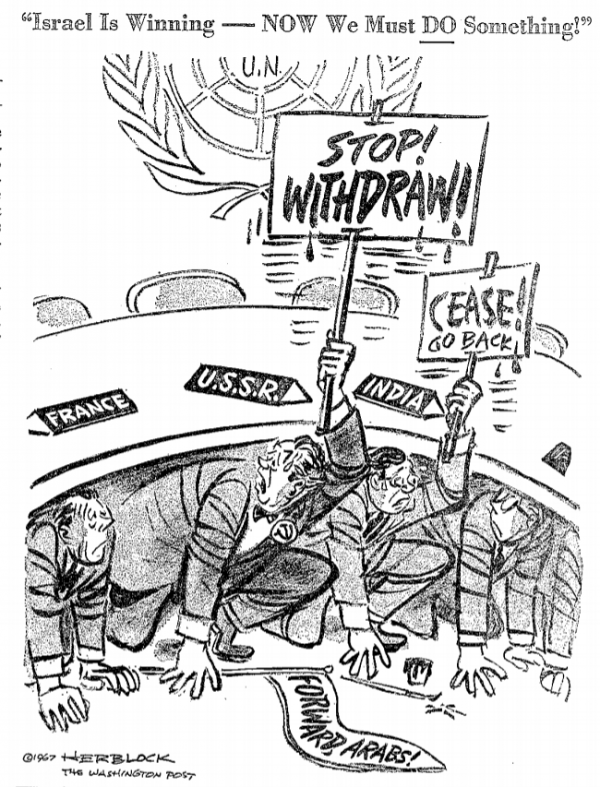 The UN Security Council has now unanimously called for an immediate cease fire. Israel reportedly would welcome one, but only if it comes with a “sincere acceptance” by the Arab governments.

Israel’s Foreign Minister Abba Eban told the Council that Israel is looking for its Arab neighbors to agree to the “peaceful settlement of disputes.” It also wants an “acceptance of Israel’s statehood and total elimination of the fiction of her non-existence” and an “authentic intellectual recognition” of Israel’s “deep roots in Middle Eastern reality.”

Eban delivered a fine speech. But as usual, it fell on deaf ears.

The 3rd company of the 66th Battalion of the Paratrooper Brigade’s reserve force—55th Brigade fought at Ammunition Hill today, where they eventually overran Jordanian forces. 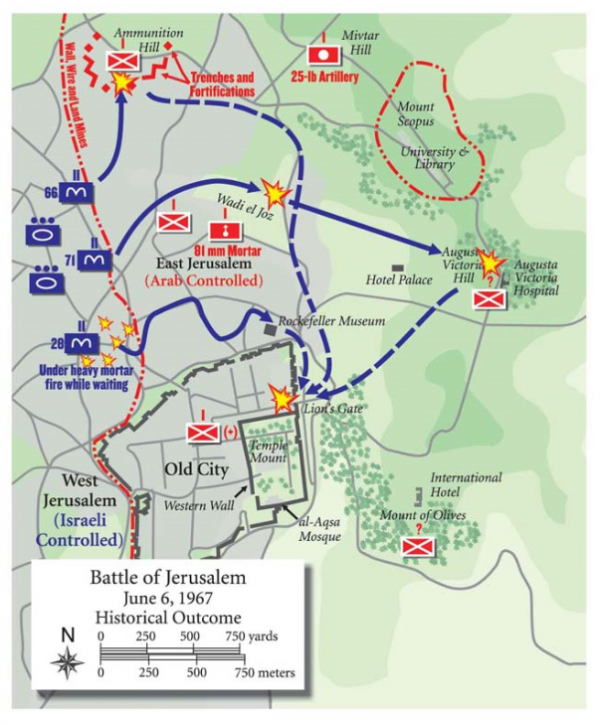 The soldiers have been describing hand-to-hand combat at this fierce and bloody battle, where they ended up having to resort to using bayonets and knives in the cramped trenches:

“…all we could see was a hill surrounded by trenches and barbed wire. When we started to move they threw everything they had at us. There was a passage covered with barbed wire. I jumped on it and helped others to cross. I felt no pain. We went into the trenches. They were not very deep, but they were quite narrow. When someone was hurt, we had to lift his body over our heads.” 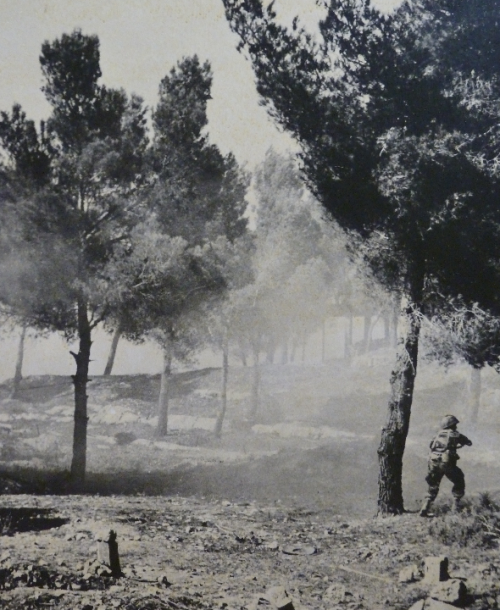 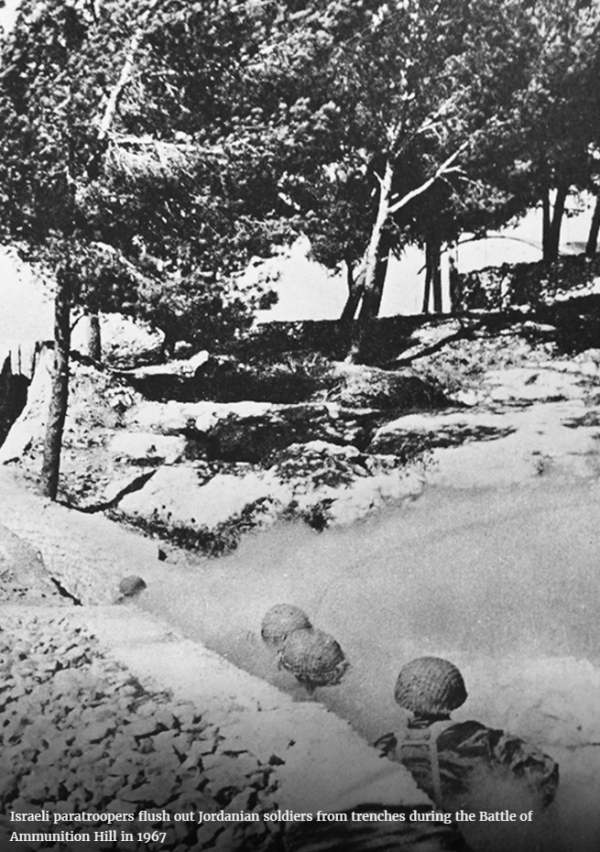 We’re hearing rumors that shoddy intelligence led Col. Motta Gur to believe that only a few dozen Jordanians were defending the site, when in reality over 100 soldiers were entrenched on the hill.

Fighting overnight was fierce. I had no idea it would be like this. We lost many soldiers. #sixdaywar

In the early morning, following this intense combat, the paratroopers finally freed he place. Thirty-six were killed and dozens more injured; 71 Jordanian fighters were also lost in this fierce battle.

The paratroopers are now saying that they have a lot of respect for these Jordanian soldiers who fought hard “like heroes” and down to the last man. Some of the IDF troops built a memorial for their fallen comrades and one for the Jordanians too, “in honor of their bravery.” 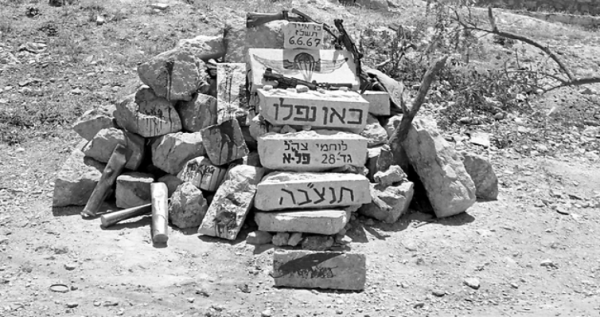 Over the last 48 hours, the Shaare Zedek (Gates of Justice) hospital, located on Jaffa Road, has been the hospital closest to the combat—just a few kilometers from the front and under near constant Jordanian fire. 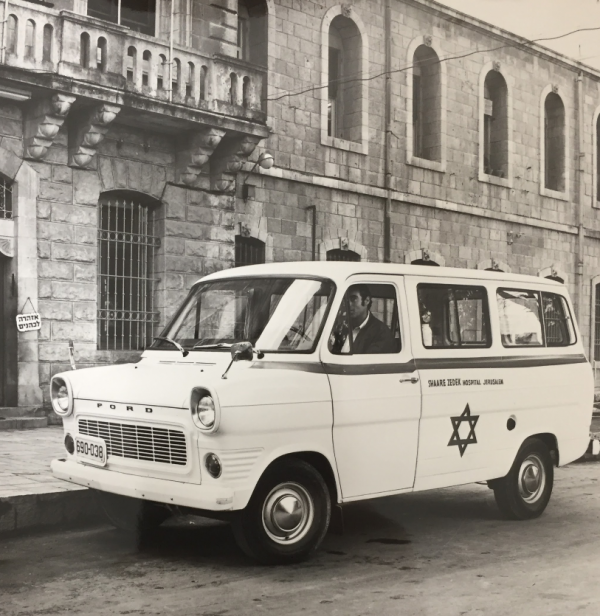 Yesterday, when Jordan began to shell the civilian areas of west Jerusalem, the hospital staff was already prepared, having moved into a “state of emergency” some hours before.

The staff had taken up their pre-assigned duties: emergency generators were activated; windows were covered with blackout material and anti-blast strips; many patients were evacuated with medicines and medical equipment so that they could be treated at home. Classrooms, dormitories, and other non-essential areas were converted to emergency wards and underground operating theaters were set up.

In a matter of hours, Shaare Zedek had morphed from a civilian hospital to a front-line military hospital. It received many of the casualties in today’s battle for Jerusalem. More than 150 soldiers ended up being treated yesterday; today another 300 wounded soldiers and civilians were treated. Quite a few of the soldiers reportedly defied doctor’s orders—after receiving treatment they rushed back to rejoin their units.

With the fighting close by, shells fell very near the hospital. The campus ended up sustaining three direct hits today, but miraculously no one was hurt. 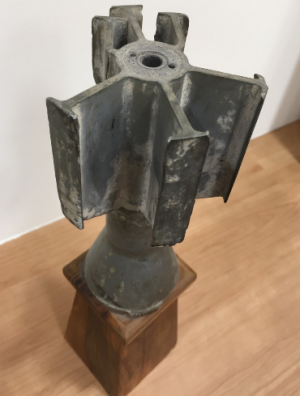 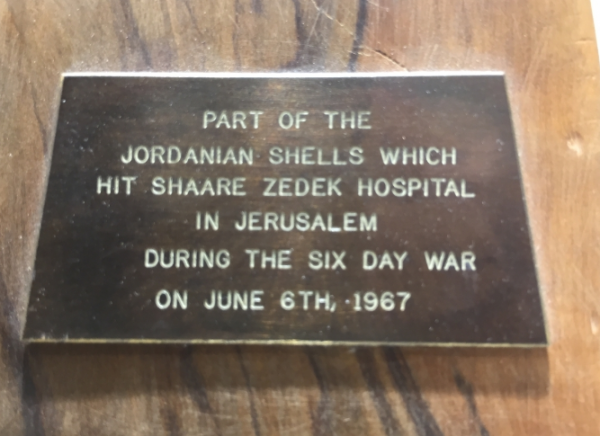 The medical staff ended up performing more than 200 operations in just two days. Many lives were saved, but some could not be helped. 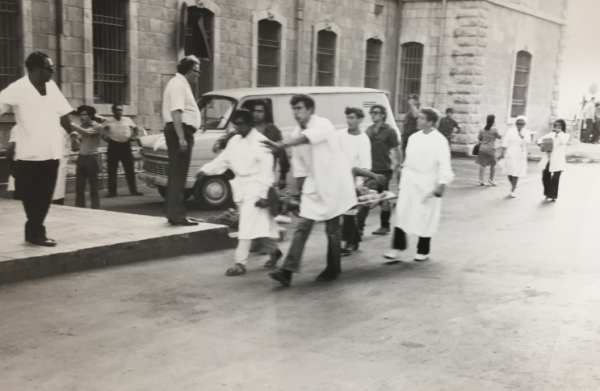 Yesterday, a young mother who had been searching for shelter in the Morasha (Musrara) neighborhood between the Old City and Mea She’arim had wounds that were too severe. Her baby is now an orphan.

But an eleven-year-old Arab girl from the Deir Abu Tor Quarter of Jerusalem was brought today to the hospital by IDF Captain Nissim Ben Israel who found her wandering the streets. She had a serious neck injury and suffered cardiac arrest while on the operating table. She was revived and the surgeons say that she’ll be fine.

In this second day of fighting, Israel continues to make important advances. Egyptian forces are beginning their retreat from the Sinai and the Jordanian Armed Forces are leaving the West Bank.

Israeli troops resting at the Southern Front during the #SixDayWar 50 years ago today #ThenAndNow #OTD pic.twitter.com/nCCV1CmLzZ

Now that all Jordanian-controlled Jerusalem is in Israeli hands, what to do with the Old City has emerged as the “hot topic of conversation”. So far though the security cabinet is still debating the issue, and Col. Gur’s paratroopers haven’t yet been given the government’s authorization to advance.

Historic developments in Jerusalem. IDF poised to gain full control of the city, but we have to consider all implications

Minister Menachem Begin is reportedly adamant that Israel shouldn’t “put off for even another hour” entering the Old City. But ironically its defense minister Moshe Dayan who remains among the staunchest opponents. He says that he doesn’t want the troops to get bogged down in Jerusalem when they’re needed on other fronts, and he thinks that there’ll be international pressure on Israel to leave the Old City once it’s captured.

We might think differently if Jews already had access to the place. But since 1949, Jordan has failed to live up to the Armistice Agreement, and free access to the Western Wall, which was part of the agreement, has never been implemented.

The division of the city has been a “painful anomaly” for the last 19 years, locking Israelis and Jews across the planet out of their heritage. 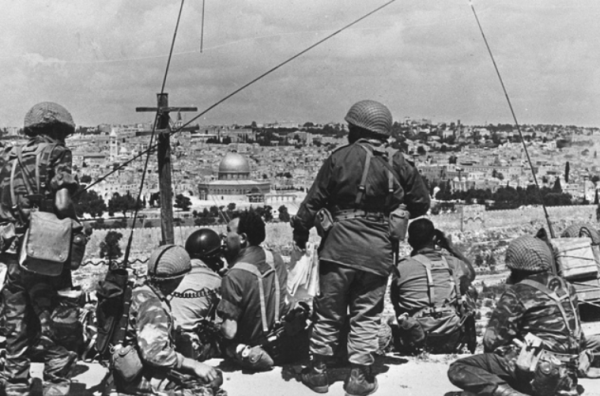 Paratroopers Ready to Break Into the Old City | Credit: Times of Israel

So we’re hoping that Dayan will soon change his mind.