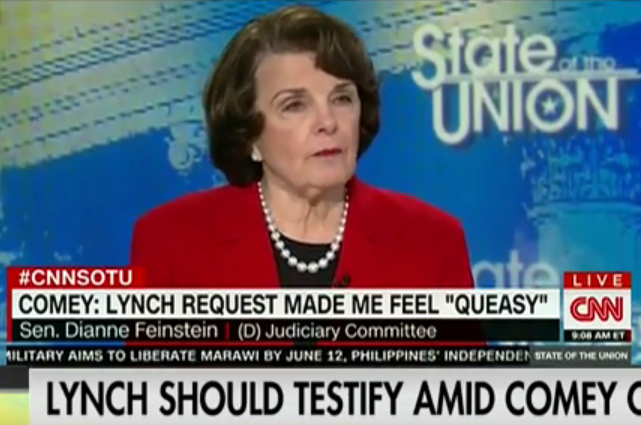 This weekend, I recounted the astonishing immaturity of California’s junior U.S. Senator Kamala Harris during several hearings in which she participated.

However, our state’s senior U.S. Senator, Dianne Feinstein, may be attempting to salvage some of California’s former reputation of producing serious politicians. Feinstein recently stated that perhaps the time has come to look into Comey’s testimony that former Attorney General Loretta Lynch asked him to minimize the nature of his investigation into Hillary Clinton’s emails.

Testifying before the Senate Intelligence Committee on Thursday, Comey said Lynch had asked him to refer to the probe as a “matter” rather than an investigation, an exchange that he said made him feel queasy.

Asked whether Lynch was providing cover for Clinton, Feinstein said she couldn’t answer.

“I would have a queasy feeling too, though, to be candid with you,” she said on CNN’s “State of the Union.” “I think we need to know more about that, and there’s only one way to know about it, and that’s to have the Judiciary Committee take a look at that.”

There are a lot of adjectives one could use to describe Feinstein’s statements. Given the fact that California’s Democratic politicians have practically declared war on the President of the United States, I would use the term “miraculous”.

“What Sen. Dianne Feinstein did as a Democrat is refreshing because the Democrats, now they basically say the word ‘Russia’ more than they say the word ‘America,'” Conway, counselor to President Trump, said in an interview on Fox News.

The Washington Examiner’s Emily Jashinsky indicated that Feinstein seemed to be the right person to ask for the review into Lynchi’s behavior.

Feinstein, a liberal stalwart on Capitol Hill, lends credibility to calls for Lynch to face questions about her conduct.

Laughably, “a person close to” Lynch told the New York Times that “use of the bland term [matter] was intended to neither confirm nor deny that the investigation existed.”

If Comey’s account is accurate, Lynch used her weight at the helm of the Department of Justice to ask the FBI director to mislead the public about a serious investigation into a major party’s nominee for president. Further, as Comey noted, Lynch’s request closely mirrored the campaign’s efforts to downplay the investigation. And, on top of all that, she also held a private meeting on the tarmac of the Phoenix airport with former President Bill Clinton last summer, amid her own department’s investigation into his wife.

Of course, Russia could be behind this move!

Feinstein calling for a lynch investigation is like obama telling his administration to “Tell the truth”. There is not one sincere word coming out of the old hag from CA. She would do everything in her power to NOT bring lynch before her committee.

You mean, “the corrupt old hag from CA.”

And she’s one of the better democrats – if there are any.

…I would use the term “miraculous”.

I would use the term “suspicious”. A Dimocrat wanting another Dimocrat investigated?

No, make that “highly suspicious”.

notamemberofanyorganizedpolicital in reply to rinardman. | June 13, 2017 at 12:57 pm

Did Lynch snub Feinstein at Hillary’s last all girl party?

Put me in the “suspicious” camp.

History makes it clear that when any Democrat is involved, we can safely assume that the absolutely basest motives are standard operating procedure.

Methinks this call is going out the Hillary to shut up.

JUNE 27. The first big Clinton holiday is June 27, CLINTON ARIZONA DAY. That’s the day we all put out the Arizona sunburst flag to remember Bill Clinton’s June 27, 2016, accidental secret meeting with Attorney General Loretta Lynch in her airplane on the tarmac at Phoenix Sky Harbor International Airport. On this day this year, all of us will get together secretly with the prosecutor investigating our closest relative and talk about golf and grandchildren.

JUNE 29. The next big Clinton holiday is June 29, CLINTON RUSSIA DAY. That’s the Day Russians put out the blue, white and red flag to celebrate Bill Clinton’s June 29, 2010, $500,000 speech in Moscow that gave a Russian investment bank a tidy way to bribe Secretary of State Hillary Clinton into approving Russia’s bid to buy 20 percent of U.S. uranium. On this day every year, each Russian gives big gifts to the closest relative of an American who has a uranium mine.

THE FIFTH OF JULY. And of course, the other big Clinton holiday is the CLINTON FIFTH OF JULY. That’s the day we recall how, on July 5, 2016, FBI Director James Comey announced that, contrary to all the evidence that Hillary was guilty of mishandling secret documents, hiding official emails and destroying public documents, the FBI would not indict her because she is a dear friend who once worked for the government. On this day this year, the ruling elites will get together and celebrate their independence from the law.

Brilliant satire! Or … extreme prescience, I can’t really decide which.

JUNE 29. The next big Clinton holiday is June 29, CLINTON RUSSIA DAY. That’s the Day Russians put out the blue, white and red flag to celebrate Bill Clinton’s June 29, 2010, $500,000 speech in Moscow that gave a Russian investment bank a tidy way to bribe Secretary of State Hillary Clinton into approving Russia’s bid to buy 20 percent of U.S. uranium. On this day every year, each Russian gives big gifts to the closest relative of an American who has a uranium mine.

Sigh. This lie again? Clinton had no control over the decision to approve a Russian company’s bid for a controlling interest in a Canadian company that owned uranium mines in the US. That decision was entirely up to 0bama, not Clinton. Clinton didn’t even participate in the process of advising 0bama whether to approve it.

Call the bluff and do it

I’m not sold on this, but someone on another website floated this theory re Feinstein’s comments:
Hillary is not going to go away, and now she’s added the DNC to her list of excuses for losing the election. Maybe the top Dems are tired of Clinton’s whining and want her to go away.
An investigation into her connection with Loretta Lynch will send Hillary into hiding…

notamemberofanyorganizedpolicital in reply to HamiltonNJ. | June 13, 2017 at 8:20 pm

So Hillary is blaming the Democrat Party for letting Hillary steal the nomination….

I think her real motive is that she has been briefed that any damning evidence has been destroyed, so her call is an orchestrated press release.

It’s time for the GOP to get a special prosecutor to investigate where we KNOW where crimes happened:

And, maybe many more.