Keeping it classy in Cali 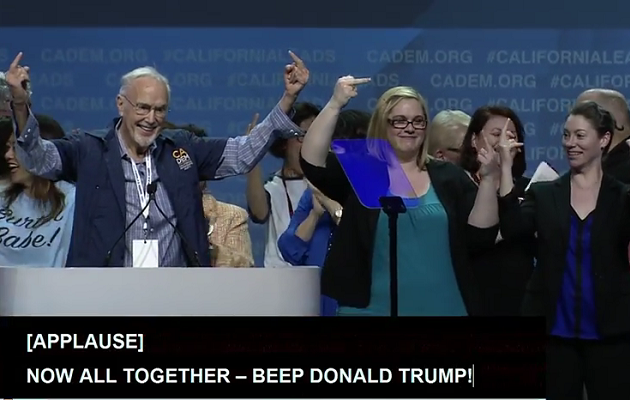 The anti-Trump fervor we’ve been documenting is not limited to college campuses, the mainstream media, and well-organized and -funded leftist organizations.  The unhinged hatred for our president most recently manifested at California’s Democratic Party Convention where its chairman, John Burton, raised his middle finger and lead a chant of “F*%! Donald Trump.”

The always foul-mouthed Burton, 84, stood before thousands of Democratic delegates at Saturday’s general assembly and as a rallying cry asked the crowd to join in. He then shoved two fists in the air, flipping the bird. Across the room at the Sacramento Convention Center, others onstage and in the audience followed suit.

Perhaps more remarkable was the eager willingness of the crowd to join in with him, chanting, while House Minority Leader Nancy Pelosi and Obama’s Former Secretary of Labor Hilda Solis looked on, laughing it up in the background.

. . . . Democrats view Trump as deplorable, irredeemable, and therefore no insult is too great (Just watch all the most recent “Saturday Night Live” cold-opens), no threat is too bold (Violence Against Trump Supporters the New Normal), no violent imagining too far-fetched (Madonna calls for burning down the White House), and, of course, no commentary too lewd or crass for general consumption (see above).

Seeing Democrats behave like this is becoming very commonplace. Remember Senator Elizabeth Warren (D-MA) grabbing a bullhorn at Logan Airport and pledging to “fight shoulder to shoulder” with the anti-Trump mob?

And please tell me how sane and rational these people are!

A cancer that threatens the host.

So, do you have to first be insane to be a Dimocrat, or does being a Dimocrat make you insane?

notamemberofanyorganizedpolicital in reply to rinardman. | May 23, 2017 at 1:34 pm

It used to be that if you were a committed, un-questioning Demcrat you will later go insane.

However since at least 2008, you must first prove you are insane to join the Demcrat Party!

“you would later go…”

And they’ll never get any older.

I’ve read experts who say studies reveal these folks’ “EQ” (Emotional Development Quotient) is arrested at between 18 months and 24 months.

I did a quadruple or quintuple take when I read that.

Oh they can have high IQ’s, but they’re technically sociopaths/psychopaths.

Why don’t they just cut to the chase and chant
F____ the USA?

“Let’s all hold hands, sing a pretty song full of hate and vulgarities and then we’ll jump over the cliff together! That’ll teach them!”

A fine example of: “Civil political discourse” – Saying nothing that offends sensitive progressives.  Offending conservatives is A-OK  because conservatives are offensive.

I suspect Mr. and Mrs. Trump do not need the help of these cretins to make one another very happy. These fools may not have intended to wish something wonderful on that couple, but that is what they did.

Isn’t it time we took the words “fuck” and “fucking” back from the “smash monogamy” crowd?

“Fuck” was once the simple english word that referred to the act of procreation. Now, nobody uses it in polite company as a description of one of life’s great pleasures. We use the word “sex” as a euphemism for “fuck,” because the Bill Ayers types have used the word as an epithet.

But “sex” had a prior definition, too, what we now refer to “gender.”

God gave us the act of procreation, and with it, he gave us the potential to create human pair bonds. Our customs and teachings about how and when to fuck properly (when you are old enough, when you like a person well enough, when you are serious, and not outside marriage) are all customs that have the potential to produce and strengthen the human pair bond and make it a source of comfort and strength. Violation of those principles produces misery. People with that pair bond build homes to protect each other and their children. They also demand decency in society, so that their families and the next generation can thrive.

The cumulative actions of the 60s retreads are not about producing happy, stable, strong people. They are all about producing misery, and then offering government control (with themselves as the government) as a solution to the misery their own policies have produced.

“The cumulative actions of the 60s retreads are not about producing happy, stable, strong people. They are all about producing misery, and then offering government control (with themselves as the government) as a solution to the misery their own policies have produced…”

You might want to add: “…and thus create a fascistic society in which they become elites, and derive wealth on the backs of the uneducated masses.

notamemberofanyorganizedpolicital in reply to TheFineReport.com. | May 23, 2017 at 6:13 pm

The core problem of the Demcrat Party is they have never evolved beyond the year 1860.

They tried to abort Trump. Failing that, they hope to fuck Trump. The left, right, and center are entangled in a menage a trois. It’s the baby that will get Planned.

The perfect “Tar Baby” for them then……….

I’m really OK with California seceding from the U.S. Or maybe we can just kick them out.

Yes it is offensive. But the blatant double standard applied by the media opinion shapers is what irks me most. You’d literally see 30 op-eds and essays in major newspapers the next day if that had happened at a GOP rally while Obama was president. They’d be decrying the hatred and lecturing us all about how the coarsening discourse is “against our values” and detrimental to “our democracy”. And, of course, they’d be absolutely certain it was all about racism.

I’m sick of their inane blather, their hypocrisy and their double standards. They want to be applauded for saying “fuck Trump”. The Democrats and the media can go straight to hell.

Imagine if middle fingers and F-words were used at an anti-Obama rally (not that Conservatives partake in crap like that). The moaning and outcry would literally be deafening.

This the democrat version of “Sieg Heil.”

Maxine Waters is their new Rudolph Hess (jump to 0:48:)
https://www.youtube.com/watch?v=EKBql0JjYFw

Where democrat loon Howard Dean got the inspiration for the speech that – fortunately – ended his political career:

The inspiration for leftists now absolutely controlling the state of California, but having their sights set on the rest of the nation:
https://www.youtube.com/watch?v=e9fEM-MfSiU

California democrats led by Jerry Brown want to enact universal single payer health insurance available to all residents, legal or illegal. The price tag is estimated to be $400 BILLION. That amount is more than three times the $124 Billion general fund budget.

If saner heads do not prevail in the California legislature in which democrats have a super majority in both chambers, the chance of this boondoggle will become law. A sane mind would realize this gives “free” healthcare to anyone who enters the state, legally or illegally, and shows up at a doctors office, clinic or hospital.

I do not give much chance to saner heads prevailing. The Democrats believe this can be paid through higher income tax levies, payroll taxes and elimination of expenditures for Medicare and Medical which will no longer be necessary. to afford this, the state will need to start confiscating wealth through increases in real estate taxes(presently constrained only by Prop. 13 for which there are increasing calls for its repeal) personal property taxes and death taxes.

Perhaps the state can start a new lottery to fund single payer healthcare. In the 1970s the first state lottery was sold to California voters, whose approval was necessary, on the basis that any revenue loss in school funding due to Prop. 13 would be more than offset by lottery revenues.

It was claimed that a lottery would raise so much money for the schools that California would soon have the very best schools in the nation if not the world. These would be schools that would make every Californian beam with pride.

We see how well lottery based funding worked so well for California schools. It drove them into ruin to the bottom of the heap. Tax revenues alone will not fund single payer, why not try a lottery to fund single payer healthcare? Californians may then soon be able to enjoy the worst health care in the country.

Funny how that Democratic success story never quite arrives, yet the Republicans are still always to blame…