The musical equivalent of what we see daily on Morning Joe 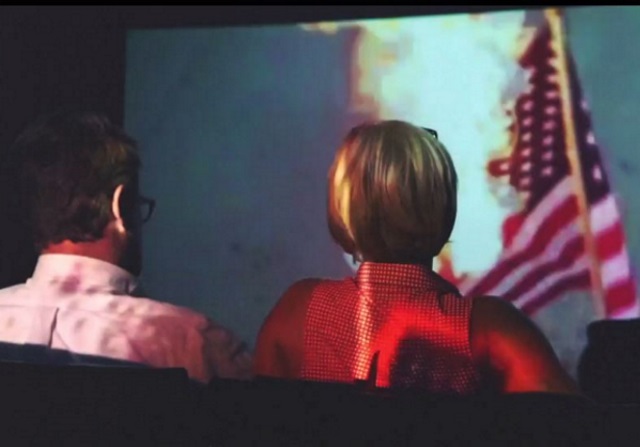 For months, we’ve been chronicling Joe Scarborough’s increasingly anti-Trump statements, as the Morning Joe host Scarborough called the president a “schmuck” and a “jackass,” and repeatedly questioned the president’s mental health, as here and here.

Scarborough now appears to have hit rock-bottom [excuse the pun], with his release of a music video portraying Joe with co-host and fiancée Mika Brzezinski observing a nightmarish anti-Trump mash-up.

As the Daily Mail puts it, “Scarborough shows images of a world in decline from war, drug use, guns and racism, with video clips of President Trump scattered throughout.” A nuclear mushroom cloud even puts in an appearance. At the video’s end, Putin murders a blonde.

Note: the Daily Mail article also displays a clip of Scarborough bringing Mika up on stage at a recent performance.

Note segundo: As mentioned, the title of Scarborough’s album is “Mystified.” We’ll admit to being a bit mystified ourselves.  Joe used to be a Republican Member of Congress, representing a conservative, Florida Panhandle district. In his current persona, Scarborough puts Rachel Maddow to shame when it comes to unhinged Trump hatred. What happened?

Two reasons:
1) He gets to keep his job.
2) He gets laid. Though in my opinion, not getting laid should be the incentive.

Hopefully Mika is better on her back than on her feet.

Even on her back, she probably still puts her foot in her mouth.

Ahh. The Morning Joke and his brain-dead bleached blonde bimbo. Joe is like an organ grinder’s monkey. He dances for whoever puts money in his hat.

You know him well. Was he your Congressman, too?

I had dealings with Scarborough, as well as the aids in his Congressional office when he represented our district (1st Congressional) here in Florida. I had absolutely no respect or use for him then, and I have even LESS than that for him now (and theoretically, that should not even be possible).

Every time he ran for office after his first term, I wrote in a friend’s name rather than cast a vote for him.

Oh, and no offense, but I didn’t watch the video. I refuse to subject myself to his blather. I had enough when he was supposed to be our Congressman.

Oh, puh-leez! The synth sounds are pre-made loops available in an old version of Acid Loops. What a talentless slug. Real musicians make their own music. I can’t believe he tarnishes the Fender brand…….get off the stage you wuss!
https://www.youtube.com/watch?v=ChS7oJ9_ekg

He’ll win an academy award for best short – with a special appearance by michelle obama (ugh) for consumption by the usual useful idiots.

His video is an insight to this weirdo’s mind like a reverse Rorschach inkblot test.

“Scarborough shows images of a world in decline from war, drug use, [Girls in Bikins] and racism, with video clips of President [Obama, Clinton, and Bush] scattered throughout.”

And the blonde is murdered by Putin? When did Putin grow a beard?

Sheesh guys, I get it that you hate Joe. But really this video is about as anti-trump as a bottle of Ben-Gay ointment. It smells bad, and will burn your eyes, but really has nothing to do with hating trump.

“It smells bad, and will burn your eyes, but really has nothing to do with hating Trump.”

Don’t take my word it. Check out Joe’s Facebook page. He calls the video: “TrumpWorld Culture on the Skids”

“Check out Joe’s Facebook page. He calls the video: “TrumpWorld Culture on the Skids””…

Morning Joke may be living in “Trumpworls culture on the skids,” but we aren’t. And we’re very happy.

Leave this jerk the obamas, the cintons, the boehners and likes of all these morons, in the dust, where they are better suited to live.

Imagine what Joe and those like him would have said if this exact same video was put out, but in place of every picture of Trump was a picture of Obama.

Oh you know what they would have said without event thinking about it much.