Morning Joe: If Trump Were a CEO, He’d Have Psychiatric Evaluation and be Removed

Morning Joe: If Trump Were a CEO, He’d Have Psychiatric Evaluation and be Removed 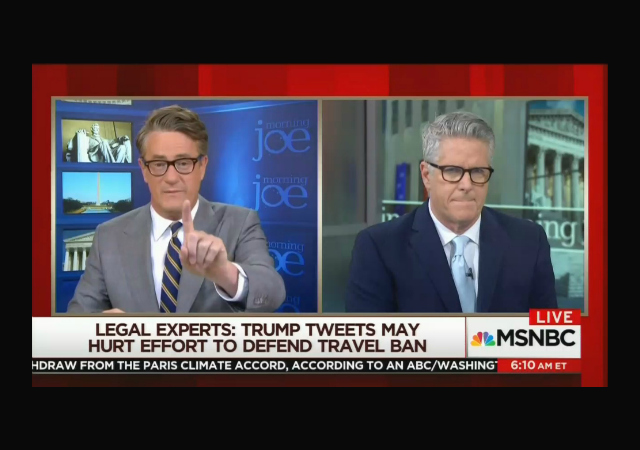 Two months ago, we reported on Morning Joe going “Crazy over Trump’s Mental Health.” The show was back on that beat today, with two variations on the theme.

First, panel members were able to cite a Wall Street Journal editorial harshly criticizing President Trump for his tweeting habits, describing him as a person “with a propensity for self-destructive behavior [who] can’t seem to help” himself and who is his own “most effective opponent.”

That same Wall Street Journal editorial reports that a recent Trump Twitter burst came in response to a Morning Joe segment on the immigration executive order.

Second, at the end of the discussion, Donny Deutsch suggested that people of “gravitas” in the administration like McMaster and Mattis inform the country that “something is not right . . . something is troubling” with the president. A possible prelude to removal?

We’ve created a YouTube montage of the numerous statements by the Morning Joe panel questioning President Trump’s mental health. Perhaps most striking among them was Joe Scarborough’s suggestion that if Trump were the CEO of a Fortune 500 country, he would be given a “psychiatric evaluation” and removed from his position.

Note: the WSJ editorial and other complaints about his online habits notwithstanding, President Trump is not backing down on his use of Twitter.

The FAKE MSM is working so hard trying to get me not to use Social Media. They hate that I can get the honest and unfiltered message out.

If Joe Scarborough were the host of a real TV show, he would be given a “psychiatric evaluation” and removed from his position.

I think that line is getting long and he may not be at the head of it. Even within his network.

I couldn’t get through the entire montage – I’ll take it in bits – but the funniest part is at the beginning.

Joe wears those large glasses – probably to “look smart”, but he actually takes them off and bends all the way down to the desk in order to read something, probably from a screen hidden below the desktop. Most people put glasses on to read – it is funny!

I think they all have their own mental illnesses.

The MSM is the enemy of the American people and the traditional American way of life. Of course they are disturbed by losing their control of what Americans hear from the President.

Joe apparently doesn’t realize that CEO’s are generally appointed by a board, and can be removed by that same board.

The board in the Presidents case is composed of “the American People”, and the decision to keep or remove him is called “an election.”

If Trump’s ascendancy has done one thing for me, it is bringing the glaring panic of the left (hence most of the media) to the surface. Even when Obama was in office you could sense some dissatisfaction with the rate of change, and college campuses have been the most obvious indicator. They are, after all, the test bed for the farthest left of the progressive movement, and administrators are by and large far, far from the mainstream (or average) progressive in real life.

But since Trump has won the election, I feel like I am watching some Sci-Fi movie, where a creature determined to take over mankind is finally being cornered. The behavior becomes erratic and panicked, and at times violent. Or perhaps the creature has occupied a body and is being irradiated in an effort kill it like a cancer. And so it destroys the host body in an effort to survive the attack. Regardless of what plot you choose, this has all the signs of a threatened adversary which has decided that all boundaries must fall and any activity is fair game. Little is behind the scenes at this stage. It is all on panicked display for us to see. Is it really a push for survival? (of Bernie type progressivism?). We will see.

Tweeting is very effective at going around fake news. There is no longer any use for newspapers or network “news” since they replaced journalists with obnoxious lib-bots.

We need to build a few large national media outlets that will focus on the true political “center” where the American consensus is found. THAT is where you have discussions. Everyone in the center wants to focus on the facts, whatever they might be. Establish the facts and THEN debate.

We can’t keep being forced to make up our minds on issues where everyone has their own “facts” and where the political center is artificially defined as the mid-point between very liberal and whack-job, space cadet crazy psychotic liberal. A little reality would go a long way these days.

Expect then a formation of a new centrist political party. The outer fringes of both the Ds and the Rs will be ignored.

It really isn’t about left and right or conservative and progressive. It’s about the rule of law vs gangsterism and machine politics.

I have to say, I do think Trump could tone down an occasional tweet. Although he was right about Khan, I’m not sure the wording was beneficial, or the timing.

Let Trump be Trump already! It’s refreshing to know exactly what he thinks without having to filter it through “consultants”! If it bothers you, then it’s your problem. Don’t worry about rest of us. This is the Trump we saw campaigning and the Trump we voted for. Believe me, we can handle it.

Ramadan, everyday we get to be enriched by the religion of peace

Just more evidence that neither Morning Joe nor anyone else at MSNBC has ever worked in the private sector. What does he think would happen? All the employees would get together and vote for that? Geez.

I believe that Trump is also saying to his DOJ, “don’t do that sh*t to me again.”

Surely the irony is not lost.

Trump was a CEO until he became president. It is the same man. No one had any complaints before he become President (R).

We elected him despite or because of his twitter habits. Get over it.

And the average Fortune 500 CEO would be a lot more interesting if every tweet wasn’t curated and sanitized to the 19th degree.

Okay Joe. Both you and Trump worked for NBC. Who made more money form NBC — you or Trump?

By the way Trump was a CEO, of the Trump Organization. He was not removed and accumulated billions. What have you done other then whine?

Say it ain’t so Joe.

It is President Trumps tweeting that won him the presidency in the first place, his unfiltered connection with We The People rather than only the snippets and spin the “media” wants us to hear.

Joe et al. are only upset because they don’t get to control the narrative – or for that matter write it or have anything to say about it.

I don’t care that Trump uses social media I just can’t stand that he doesn’t care what his spokes person says. They have to have a consistent message.

The MSM seem to be not disclosing good news, but just keep yapping about tweets, misspelled words and trying to create news. But, there re things that are happening… some good news about regulations: