Mother of Palestinian terrorist who killed policewoman: “Thank God I Am Proud”

Mother of Palestinian terrorist who killed policewoman: “Thank God I Am Proud” 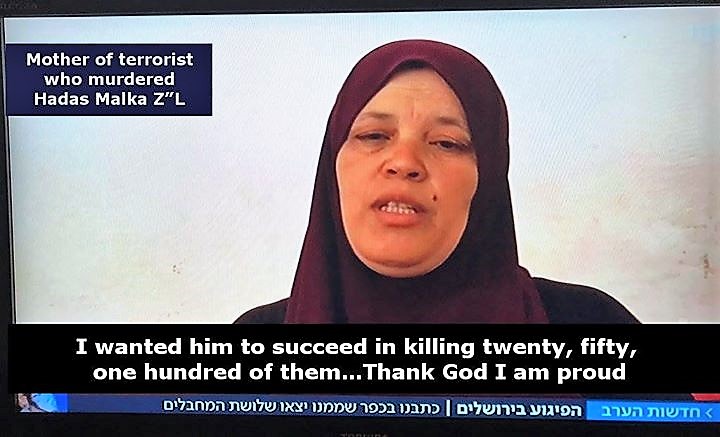 Hadas Malka was a 23-year-old Israeli policewoman who was stabbed to death in a coordinated attack by three Palestinian men outside the Damascus Gate to the Old City of Jerusalem. All three attackers were shot to death during the attack.

The ruling Fatah Party, led by Mahmoud Abbas, condemned the shooting of the terrorists, and called it a war crime. 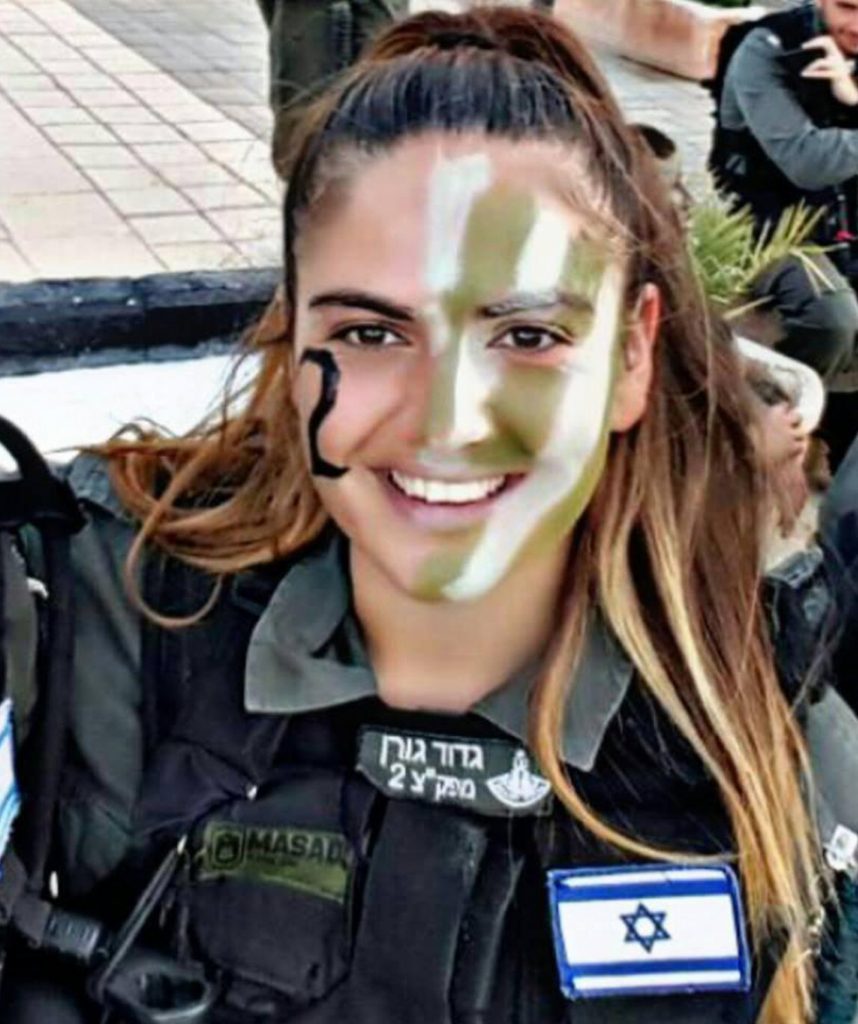 The three killers took a selfie before the attack: 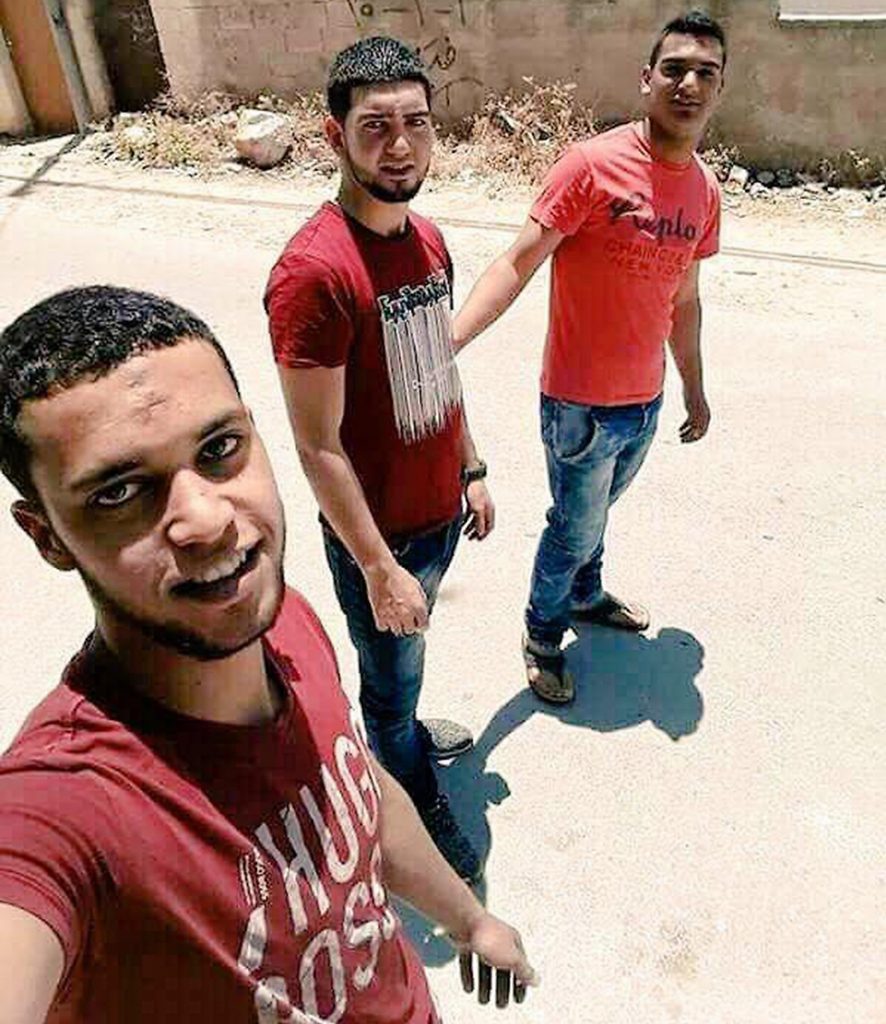 Jared Kushner, arriving in Israel as part of a peace negotiation effort, made his first stop a visit to the family of Hadas Malka, as the Times of Israel reports:

The visit to the family of Staff Sgt. Maj. Hadas Malka, 23, was the first stop for Kushner before a series of meetings aimed at restarting long-dormant Israeli-Palestinian peace talks.

Kushner was joined by US Ambassador David Friedman on the visit. Kushner said Trump asked him to personally convey the condolences of the American people.

Kushner and US peace envoy Jason Greenblatt were to meet with later with Prime Minister Benjamin Netanyahu and afterwards with Palestinian Authority President Mahmoud Abbas in his Ramallah headquarters in the West Bank. Trump has tasked Kushner with the ambitious goal of laying the groundwork for what he calls the “ultimate deal.” Deep divisions remain, however, clouding the chances of a significant breakthrough. 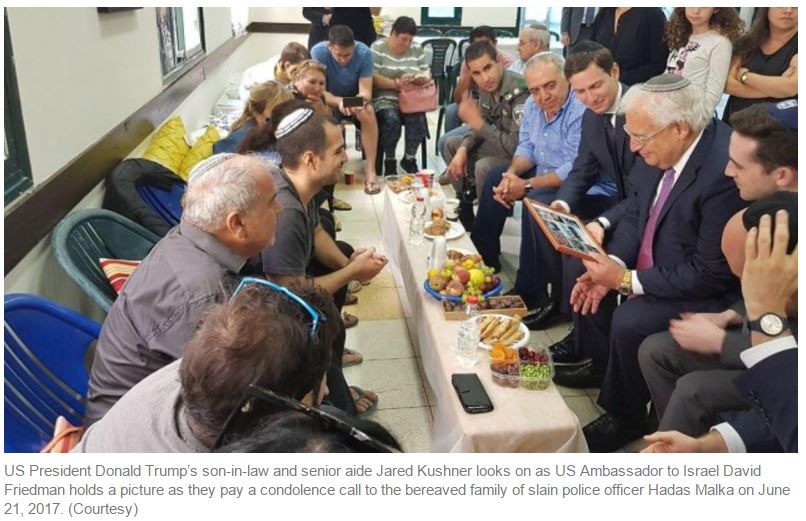 The mother of one of the terrorists was arrested for inciting the attack:

Security forces on Wednesday arrested the mother of one of the terrorists who carried out the terror attack in Yerushalayim on Friday. The mother, a resident of the village of Dir Abu Mashal, is suspected of encouraging the terrorists to carry out their attack. She has spoken out in Arabic media in recent days of the need for a new intifada, and how other young Arabs should attack Israelis as her son did.

This image shows the mother on TV bragging how she wished her son had killed more people (image via Michael Dicknson of the Jerusalem Office of StandWithUs):

This is another instance where a Palestinian mother expresses joy in a child killed during an attack. We featured this video before of a different mother for a different attack, but the theme remains the same:

The ME is at war with itself. Anyone with half a brain cell can see. Why in the world would you want to import this violence, under the guise of multiculturalism or even economics, into your Country? Europe is already toast, please don’t allow this to come to our shores….if it isn’t already too late.

Importing these people is crazy.
Clearly, Israel’s approach to this problem is not effective. I propose that the whole family of each terrorist out to second cousins be immediately dispatched to the afterlife.
If that does not stop the problem, then start bombing the palestinians with fuel-air weapons.
Steadily raise the kill ratio, 100, 1000, …1,000,000 to one, until they surrender or are all eradicated.

The Islam of Mohamed, as codified in the unabrogated suras of the Qu’ran, is on full display here. This is not a “perversion” of Islam; it is exactly the Islam the Prophet gave the world, the Islam that has been as a boil on the neck of civilization for the last 1400 years! It is a barbaric philosophy and that is the nicest thing that can be said about it.

I-Slam is as much a ‘religion’ as Nazism is –
and as such needs to be outlawed in all civilized societies.

Can American liberals not see the hate within these people for other human beings that they have never met? Is this a religion? It is brainwashed cult of death and enslavement. Only the blind see this as a religion. Anyone with eyes sees it as a violent merciless dictate with no humanity.

There aren’t enough mental health professionals in the entire world to deal with this. What’s more, this illness is so deep-seated to the point that they see this as good, and therefore help isn’t needed.

Further, with their increasing population more and more illness is being introduced.

Mental health professionals? Do not confuse mental illness with evil. They are two different things, although someone can be both.

notamemberofanyorganizedpolicital in reply to ahad haamoratsim. | June 23, 2017 at 3:55 pm

That is exactly what the experts in those fields of study say!

notamemberofanyorganizedpolicital in reply to fscarn. | June 23, 2017 at 3:56 pm

Inspector:
Liberals can see the hatred and violence and they embrace it. Islam is now the spear of the Left to further their ideology, mostly because it isn’t that different than their own. Europe is the example…globalists using the influx of these thugs to transform society. Just look at England…they’re more concerned about people posting negative comments about Islam on social media than “known wolves”.

The Allah god demands and gets human sacrifice.

Wouldn’t bother me if she died horribly. Share the wealth.

The video of Mr. and Mrs. Netanyahu visiting with the family is so moving.

Didn’t Golda Meir say that there would never be peace until Palestinian mothers “love their children more than they hate us”?

It’s safe to say we’re not there yet.

how can it be otherwise ?
I-Slam only considers females as brood mares to get more warriors and nothing else.

The daily incitement against Jews and other civilized humans is palpable hatred.

why should we treat these proto-cromagnons as anything but disgusting and to be shunned.
no more money to fakistinian Egyptians.
not a penny, drachma or any other worthless coin!

Someone needs to put the “mother; down, along with the father and any other siblings. Then they can be so proud together.

What Pal parents have done to their children ensures that extreme Pal suffering remains the status quo for a thousand years. Imagine driving entire generations insane with hate.

it happened in europe in the 1930s.
the US, the British Commonwealth countries and Canada were
not any different –
see how many boatloads of jews trying to escape were turned away. Saint Roosevelt was not any less an antisemite and if it wasn’t for HST as POTUS that Israel would not have been recogonized (and that only because he had a Jewish friend).

I would kill all the families connected to this. Level their houses as well. Sounds cruel but will be the only way to diminish (no, they will never stop) these attacks.

Take out families to at least second cousins. They embrace terror, help them understand it.

Pride goeth before a Fall.