“lack of qualifications and language skills” 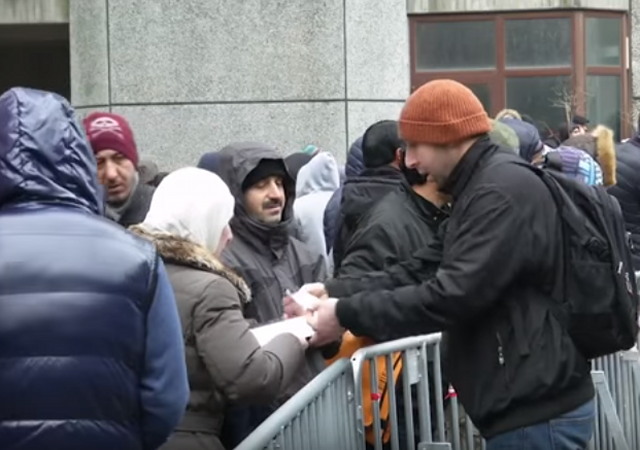 After taking in a record-breaking number of refugees, Germany is facing a harsh reality. A majority of the refugees are going to be unemployed for a long time, thus making them a financial burden on taxpayers.

Aydan Özoğuz, commissioner for immigration, refugees and integration, told the Financial Times that only a quarter to a third of the newcomers would enter the labour market over the next five years, and “for many others we will need up to 10”.

The Institute for Employment Research (IAB) found only 45 per cent of Syrian refugees in Germany have a school-leaving certificate and 23 per cent a college degree.

Statistics from the Federal Labour Agency show the employment rate among refugees stands at just 17 per cent.

Of those, 178,500 are officially unemployed, meaning they not only have no work but are not enrolled in any training programmes or language courses — up 27 per cent on last July.

The figures will be hard to swallow for Angela Merkel as she seeks a fourth term as chancellor in elections this September.

Ms Merkel’s poll ratings plummeted in 2015 when she responded to Europe’s migrant crisis by announcing a deeply unpopular open-door policy.

It was hoped the arrival of so many working-age, highly-motivated immigrants would help end Germany’s skills shortage and solve a demographic crisis posed by its dangerously low birth rate.

This problem was foreseeable. Many of the refugees coming to Germany lack basic skills and don’t speak German. Some refugees undoubtedly came to Germany specifically to take advantage of the country’s generous social welfare programs.

The Financial Times explains the reality of the situation:

Most refugees to be jobless for years, German minister warns

Up to three quarters of Germany’s refugees will still be unemployed in five years’ time, according to a government minister, in a stark admission of the challenges the country faces in integrating its huge migrant population.

Aydan Özoğuz, commissioner for immigration, refugees and integration, told the Financial Times that only a quarter to a third of the newcomers would enter the labour market over the next five years, and “for many others we will need up to 10”…

Initially, the influx of so many working-age, highly-motivated immigrants spurred optimism that they would mitigate Germany’s acute skills shortage and solve the demographic crisis posed by its dangerously low birth rate. Dieter Zetsche, chief executive of carmaker Daimler, said the refugees could lay the foundation for the “next German economic miracle”.

But those hopes have faded as a new realism about the migrants’ lack of qualifications and language skills sinks in. “There has been a shift in perceptions,” Ms Özoğuz told the FT. Many of the first Syrian refugees to arrive in Germany were doctors and engineers, but they were succeeded by “many, many more who lacked skills”.

This presents another grim reality, as we noted in a recent post:

German authorities made large welfare payments to a Muslim family while it was fighting for the Islamic State in Syria and Iraq, German media reports say. Local newspapers did not reveal the actual amount involved in the fraud, but the ‘Jihadi family’ receiving family allowances, unemployment benefits, and child care payments could have pocketed tens of thousands of Euros in a span of one year while serving in the ranks for the terrorist organisation.

The same will be the case here as refugees qualify for the same welfare benefits as US citizens. Why should uneducated, unskilled refugees take minimum wage jobs when the government will support them all their lives?

THIS is why the refugees should have been resettled within the muslim world where the same language is used, there is the same social and religious customs…but no, let’s send them to a country with a ridiculously hard language to learn and inflict them on a population with no way to protect itself.

Find a poultry processor and put them to work chopping the heads off chickens.

I’ll be rather surprised if there’s a recognizable Germany in five years.

You mean ” what do they care, they get benefits for life?”

After the disease of obama, the majority of Americans in America face long-term unemployment.

Not that they care, so long as the jizya flows and Europe eventually is conquered for Islam.

Since only 1/3 to 1/4 of new immigrants will be employed how many more will Germany have to import to pay taxes and support the welfare cases? Seems like a Ponzi scheme.

What about the Islamic tenet of giving alms? Doesn’t that money go to help the unemployed Muslims?

Muslim imams have been preaching for years that all Muslims are entitled to welfare as payment of jizya or “dhimmi tax” as defined in the Koran. Therefore, if they are not given benefits, they should take infidel property by force.

None of this is a surprise. These German and EU leaders knew this would be the case. The goal all along has been to destroy the German culture and replace it with an ignorant “world” culture to be governed by the elite ruling class.

They think they can avoid failure going full dhimmi by converting islam but without oil no muslim country has succeeded in modern times.