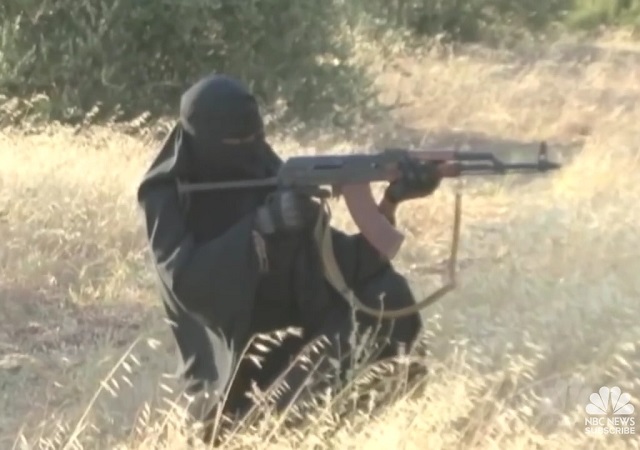 German authorities made large welfare payments to a Muslim family while it was fighting for the Islamic State in Syria and Iraq, German media reports say. Local newspapers did not reveal the actual amount involved in the fraud, but the ‘Jihadi family’ receiving family allowances, unemployment benefits, and child care payments could have pocketed tens of thousands of Euros in a span of one year while serving in the ranks for the terrorist organisation.

German authorities downplayed the latest revelations as a mere oversight caused by the ‘faulty communication’ between the Police, City and Federal Agencies. The State of Lower Saxony, where the city of Wolfsburg is located, is notorious for migrant welfare frauds. Earlier this year, the state refugee agency in Lower Saxony fired an employee for exposing over 300 cases of welfare fraud committed by migrants.

Regardless of what the authorities say, Islamist terrorists milking the welfare system seems to be all the rage in Merkel’s Germany. The Berlin Christmas market attacker, Anis Amri, was using several of his 14 different identities to collect welfare payments. Official records now show that German Social Services were aware of Amri’s elaborate fraud, but took no action against the illegal migrant-cum-terrorist.

A family with small children that had left Wolfsburg to join the Islamic State, continued to receive welfare benefits for about a year. The payments going to the married couple, which is under investigation for conspiring to commit a serious subversive act, have meanwhile been stopped — State Police said on Monday.

The father of the absconding man used his EC-card to collected family allowances, unemployment benefits and child care allowances for nearly a year, the [newspaper] Braunschweiger Zeitung reported. (…) During a raid in February 2016, €19,200 in cash were recovered from the man’s house.

The reason why the payments could not be stopped in time was as due to faulty communication: the city of Wolfsburg had been informed “in connection with the welfare payments,” clarified the [police] spokesman Frank Federau, however the city didn’t pass on the information to Federal Employment Agency (BfA) that was responsible for the payments. [Author’s translation]

Once renowned for manufacturing Volkswagen automobiles, the Germany city of Wolfsburg is now rolling out Jihadi fighters for the Islamic State. As Die Welt further writes:

After ISIS recruiters were active in the city for a long time, there was a big surge of Islamist radicalised youth from Wolfsburg to the war zone in Syria and Iraq. So far, 82 extremists have left the state of Lower Saxony for the war zone, of which 33 have returned back. [Author’s translation]

The Islamists have no qualms about fleecing the unwitting German taxpayer as they carry on with their Jihad against the West. In fact, they see religious justification for these fraudulent acts in their theology. Extracting booty from the non-believing Kuffar is a sanctioned practice under the rules of Jihad warfare. Throughout the Islamic history, conquered people were plundered in the name of ‘Jizyah’ protection-money. Islamic State in Syria and Iraq too has revived that age-old ‘Jizyah’ extortion in areas that it controls.

In their utter moral depravity, many Islamists see Europe’s generous welfare system as a divine providence on the path towards their final victory. “The rest of the year they were busy with jihad and things like that,” UK’s prominent Muslim preacher Anjem Choudary told his followers back in 2013. “People will say, ‘Ah, but you are not working’. But the normal situation is for you to take money from the Kuffar. So we take Jihad Seeker’s Allowance.”

With millions of illegal immigrants from Arab and Muslim countries swarming to Europe, the Islamist entitlement is finally meeting the gullible Western welfare state in a big way. In Germany alone, the recent migrant wave could cost the public treasury up to $1.6 trillion.

It seems, Europe plans to go bust before it gets Islamised.

This is really worse than it sounds.

Americans are used to getting up can going whenever we want to, but in Germany, you have to check in with the local police when you leave town.

Giving, not selling, the rope that will hang Europe.

This is clearly Obama-Merkel’s fault.

“German authorities downplayed the latest revelations as a mere oversight caused by the ‘faulty communication’ between the Police, City and Federal Agencies.”

Germany will soon be on the list of terrorist nations.

Why is it that we in the USA have to give welfare and other gov benefits to illegals? Is it the Constitution or federal law? Trump should erect a legal wall against illegals and stopping gov benefits would be a good part of this.

I have come to believe that America will NEVER be able to cleanse itself of this Islamic plague – our country (and ourselves) just don’t have the willpower to accomplish the task. The most we can do is bitch & whine.

So homicidal Muslim thieves and German officialdom seem to be a match made in heaven (or perhaps Jannah).

Trump may have to add anyone from Germany to the list of people who need special scrutiny before entering the US.

I’d support that. Even without the Muzzies, Germany is full of anti-American, socialist “Besserwisser” who only pretended to be our allies until the Wall came down.

Already in a town near you.
We pay people to not work. You get what you pay for. We pay Islamic terrorists just like the europussies.