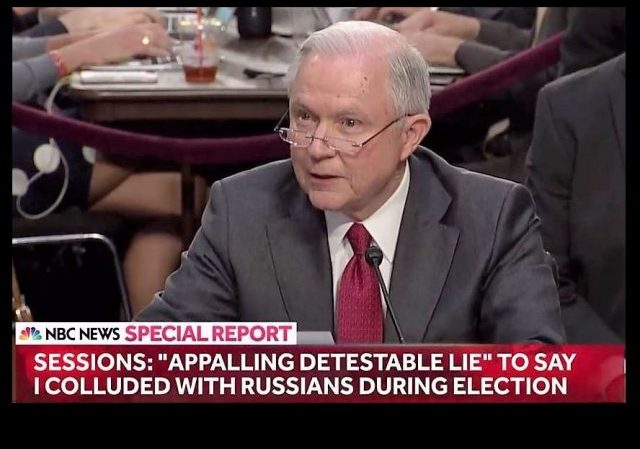 Watching Attorney General Jeff Sessions testify before the Senate Select Committee on Intelligence was both an inspiring and infuriating experience.

When it comes to inspiration, there’s Jeff Sessions. He did as well as he possibly could in slaying the media and Democratic innuendo machine. For several months we have heard conspiracy theory after conspiracy theory about Sessions based on “contacts” with the Russian ambassador.

The theory that a mere “contact” was evidence of impropriety never made sense, certainly not for an Ambassador who seems to be a well-traveled fixture on the D.C. political circuit.

Sessions’ contacts were not suspicious in the least — one was at the Republican National Convention where the Russian Ambassador was among a large group of foreign diplomats brought by the Obama administration to witness the event. The second contact was at Sessions’ Senate office in the presence of career staffers.

Never, ever has anyone pointed to anything substantive that Sessions allegedly said or did that was improper.

The absurdity of the “contact” innuendo was further demonstrated by the supposedly undisclosed third contact. That was something James Comey reportedly was referring to when he testified that there was another issue that led to Sessions’ recusal from overseeing the Russia investigation. Comey never said that explicitly, he just put the innuendo out there, and then *someone* leaked his closed door testimony on the third contact issue.

The third contact, however, appears to have been either nothing at all or Sessions merely being in the presence of the Russian ambassador at a public event at the Mayflower Hotel. Sessions said he has no recollection of meeting the Russian ambassador there, and that was supported by a letter from the organizers who said, among other things, that there would have been no opportunity for anyone at that event to have a private conversation.

I’m guessing Comey or his people have a photo of Sessions in close proximity to the Russian Ambassador, maybe even greeting each other in some way. Expect that to leak, even though it would prove nothing.

Senator Tom Cotton correctly summed up the Democrat and media tactics, and absurd conspiracy theory that defies the wildest imaginations.

What was infuriating is that this is more of the public trial by innuendo about which I’ve been writing for several months, The fact-free Intelligence Community-Media trial of Trump by innuendo:

Sessions has been a target of this innuendo campaign because, let’s face it, he’s from the South. Even worse than that for the liberal media, he’s from Alabama. So he’s a target not only of baseless claims of racism, he’s easily capable of being “othered” (how’s that for applying a trendy progressive term?). Sessions even has been accused of being a Russian spy without basis, as I documented in my prior post, Attacks on Jeff Sessions hit rock bottom with spy recruitment innuendo.

I have no illusions that this will be the end of the innuendo war. But perhaps it’s a turning point.

Jeff Sessions will put those Democrat Party Conspiracy Nuts in their place – a padded cell!

The Democrat Party Conspiracy Nuts go after everyone who’s ever used Russian dressing on their salad!

Everything that has come out certainly proves one thing – Comey was a lying, traitorous sack of sh*t who absolutely needed to be fired.

What was Obama doing inviting foreign dignitaries to the REPUBLICAN National Convention?

To witness the embarrassment of the Republicans, of course.

Thank you for the reasoned analysis. So, if I understand you correctly sir, you’re saying that I’m not really surrounded by Russian sleeper agents and that it’s probably okay for me to take this tin foil hat off of my head.

notamemberofanyorganizedpolicital in reply to tyates. | June 13, 2017 at 9:53 pm

You can even order the Russian dressing for your salad!

healthguyfsu in reply to notamemberofanyorganizedpolicital. | June 13, 2017 at 11:11 pm

NO! NO! That’s just what our Russian overlords want you to do!

“The Risk is ‘The Leaking’…

The risk represented by Robert Mueller is not connected to or about anything surrounding a Russian Conspiracy; the legal risk is within ‘the leaking‘ of classified intelligence information to undermine the administration, and the potentially illegal ‘unmasking‘.

If we avoid all the shiny things, ignore the shell game and reset our frame of reference to the only illegal activity currently known, the leaking; the fog lifts and the main thing visible is the illegal leaking of classified intelligence information.

Despite his earnest efforts, there is clear and mounting evidence that former FBI Director James Comey was the primary source of leaked information to the media…”

It’s always a great idea to get testimony from the guy who has recused himself and is supposed to know nothing, and actually knows nothing about what you are investigating.

I suppose they could interview a few janitors from the FBI or DOJ to find out if there really is “clean government”, or Chuck Schumer’s wife to find out if he really eats that “Omnibus loaf” that he claims to love.

If this isn’t the stereotype for government waste, then it is the definition of “mailing it in”

Question I would have asked Mr. Comey, had I been a Senator and on the committee:

“Mr. Comey sir, you’ve now testified that you gave a classified document to a friend of yours with the understanding that said friend would in turn pass the document on to a friend of his at the New York Times. In fact, we know now that this is how the Times received this particular document.

“With that as a preamble, my question is a simple one: while director of the FBI, on how many other occasions have you provided classified documents to other individuals for the purpose of having those documents passed to a member of the media?”

The Republicans should call John Podesta and Robby Mook and ask about their plan to use a mythical story of “collusion with the Russians” to obstruct the President-elect.
These clowns triggered this waste of taxpayer funds and undermining of the democratic process.

My respect for Jefferson B. Sessions has just increased, which I would have thought nigh well impossible considering the high esteem in which he was already held.

To me what puts the mark of Cain on the Demorats is how they treated a man with whom they have worked side by side for over twenty years and they know what a standup guy he is, yet they went for his throat! To sit there and accuse him of treason and betraying his country is a much greater sin than calling someone a liar. Wyden and Harris are below scum. They are the dictionary antonym exact opposite of the words ethical and honest. Think about the fact that they represent our country in the US Senate! I had rather bathe in a cesspool than to know that they have any input into the future of this great nation.

Well now, I gotta say, I fully agree with the Demokrats: Using a foreign power, and a hostile one at that, to assist in beating the opposition in a presidential election is despicable! Buddy-buddying with the Ruskies: pfui!, its eminently criminal treason!
Shame on those traitorous bastards!

With other words, there is perfect purpose and justification in this investigation.

The only problem is, it’s the guilty ones that that rant and rave
and finger-point. Pariahs, ain’t those Dimmycrates?

What the Republicans can be blamed for: Hapless, spineless rolling-over, plus, I am sure, those damn Never-Trumpers.

Republicans like McCain are just as “guilty” as the Democrats are for allowing this utter waste of money and time to continue on.

There is only one political party in DC and they ain’t representing the people.

I love Sessions. It;s about time he stood up for himself and the country in this stupid Russian story.

Once a couple of decades ago i knew a man from Alabama, brought into a company in the Midwest to do an HR job, for which he was highly qualified, treated with disrespect by some people because he’s a white guy with an Alabama accent. I think this is a part of what’s going on here with Sessions. And the rest of it is no more respectable.

“I have no illusions that this will be the end of the innuendo war. But perhaps it’s a turning point.”

I share the lack of illusions and wish I had the hope of a turning point. Unfortunately, what I’m reading today is that the response from the left is, “To heck with public hearings! Let’s go secret grand jury!”

Pres. Trump and his team could cure cancer, bring peace to the Middle East, and bring all the fairies and unicorns out of hiding and the left would still attack him relentlessly. Their goal is to undermine the Administration and to make it impossible for Pres. Trump to govern. It may not fly with the audience here, but they have a dedicated audience of the half of the voting public who did NOT vote for Pres. Trump; I fear that the relentless attack from the lapdog media is bound to affect those in the middle.

We might be in a better position were the President not also fighting the useless blob that is the Republican Congress.

It isn’t only the left that is after Jeff Session’s scalp – the still #NeverTrumpers who cannot let go of their hate now hate him too. Him and anyone else that supported Trump.

I was #NeverTrump. I still don’t “like” him and I probably never will. I can, and do, like some of the things he’s said and done.

I’ve been a fan of Jeff Sessions for a long time. The fact that we disagree about some things is hardly enough for me to believe this good, decent man is some kind of a spy is ludicrous.

I did not get to see Sessions live, only video clips of the better parts.

He did precisely what I would expect, delivering a dagger to the heart of the progs.

If the R party had even half of its members like Sessions, we would not have a failing country.

Our problem, those that love America and believe in freedom and liberty, are the republicans. Fix that and we can defeat the prog/commie cabal.

I see this turning point a good start for Session to restore/reclaim and carry out his honorable duty apart from serving POTUS personal agenda too eagerly… He is foremost this Republic and People’s AG after POTUS nomination and with Senate confirmation… We all have our own weaknesses.