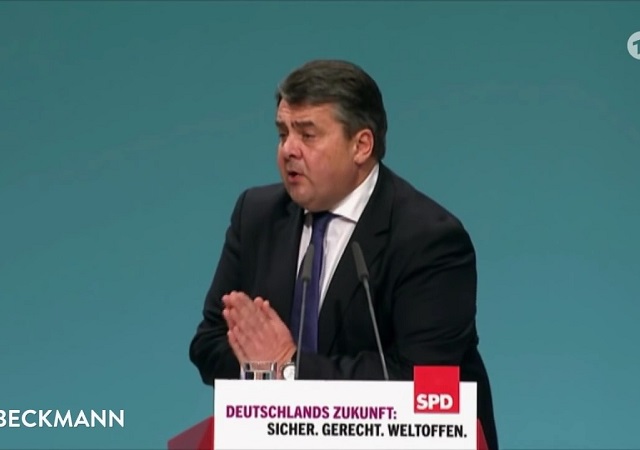 Merkel’s government wants to kick off “peace talks” with Jihadist terror group Taliban while Germany’s Foreign Minister Sigmar Gabriel revealed his country’s involvement in negotiations with Afghanistan-based terrorist group. “We are involved in finding a political solution between the hostile camps,” German Foreign Minister confirmed. It is, however, unclear how Merkel government wants to “make peace” with an Islamist group that remains committed to global Jihad and seeks annihilation of all ‘infidels’.

Ousted from power by a US-led military operation 16 years ago, Taliban has managed to make substantial gains during the eight years of Obama presidency, taking back nearly 40 percent of the country.

German Foreign Minister Sigmar Gabriel has called for peace talks with Taliban following massive terror attacks in Afghanistan. “One doesn’t make peace with friends, rather with enemies,” Gabriel told the weekly Bild am Sonntag. For a peace agreement in Afghanistan one has to negotiate with Taliban. Nowhere in the world can a situation be resolved by military means alone. “We are involved in finding a political solution between hostile camps.” [Author’s Translation] 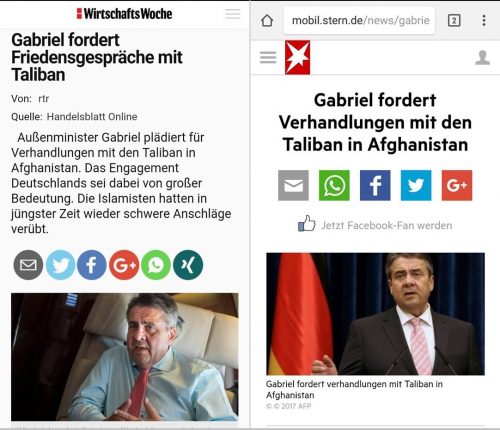 For a peace-maker, the German Vice Chancellor has a peculiar taste when it comes to picking his ‘peace partners’. During his recent visit to Israel, Gabriel preferred meeting with anti-Israel activists calling for the destruction of the Jewish State instead of meeting the democratically elected Prime Minister of the country. According to German newspaper reports, Gabriel even refused to take Prime Minister Netanyahu’s call during his trip to Israel.

The German peace plan is already in full swing. Merkel’s government is hoping to win the hearts and minds of Taliban war criminals by offering them refuge in Germany. As German public broadcaster MDR reported in April:

Federal Agency of Migration and Refugees (BAMF) has agreed to give protection to former fighters of Taliban in Germany. A spokesman for BAMF told [German newspaper] Die Welt that considering the threat of torture and death penalty in Afghanistan, Islamists can get asylum in Germany. (…)

As the newspaper further reported, recently many Afghan asylum seekers [in Germany] have described themselves as former Taliban fighters. [Author’s translation, April 27, 2017]

Last week, Merkel put a hold on the deportation of illegal refugees back to Afghanistan, claiming the country was not safe for Afghan returnees. However, the safety of ordinary Europeans facing an unrelenting wave of terror at the hands of Islamists posing as refugees was not on Merkel’s agenda.

If Jihadists are committed to the complete destruction of the West, European leaders like Merkel are willing to meet them halfway by sticking to their open door policy for illegal migrants and terrorists alike.

By these latest overtures of peace, German political elite are again demonstrating how pitifully little they have learned from their dark and tragic past. Less than 80 years after the Munich Agreement they are negotiating ‘peace in our times’ by appeasing another totalitarian, genocidal ideology.

When will enough of the world recognize that all this nonsensical “reaching out” goes only one way?

The Muslims don’t want peace. They don’t hum and sing Kumbaya. They are single-minded: Muslims want your lands and to see you become conquered by the armies of their Allah.

Okay fat boy. Go ahead and give it try. We’ll watch from here where it’s safe and finish burying the people who already tried that. Let us know how that goes.

Apparently they don’t get news in Germany.

And the Germans had better not expect us to come in expending American lives and material to free them from ANOTHER tyrannical regime.

notamemberofanyorganizedpolicital in reply to rabidfox. | June 6, 2017 at 8:15 pm

The irony here is too rich.

If the terrorists promise to not invade Brussels w/out prior infidel aggression, it’s probably a trap.

Never ceases to amaze me that suicidal,insane people can reach these levels of government.

Simple solution. Embrace the devil, er Allah, and you will have peace……

I know I’ve said it before but it’s the only logical explanation; Europe’s leaders are feeding a hungry alligator–hoping it will eat them last.

And on the anniversary of the military operation when America spent so much blood and treasure to save Europe from itself, only to later hand themselves over to Islam…absolutely shameful.

notamemberofanyorganizedpolicital in reply to buckeyeminuteman. | June 6, 2017 at 8:18 pm

The triumph of hope over experience. They want to kill you, or rule you, but not co-exist with you.

notamemberofanyorganizedpolicital in reply to gbear. | June 6, 2017 at 8:20 pm

Those “Co-Exist” bumper stickers are the BIGGEST JOKE evah!

The Germans aren’t dealing in reality. They have no power in Afghanistan and can’t make a deal stick. Letting thousands of Talib into Germany is insane as they will bring their tribal ways to Germany guaranteeing the Afghan disease will become the German disease.
Wow.

To borrow from Lily von Shtup’s nickname in Blazing Saddles, the Germans have become a bunch of Teutonic Pu$$ies.

Still trying to apologize for that Third Reich thing.

notamemberofanyorganizedpolicital in reply to Rick the Curmudgeon. | June 6, 2017 at 8:21 pm

Yes and, the Quraysh made a “peace treaty” with Mohammad himself! Perhaps Merkel’s government has heard of it?

Or perhaps not (they probably don’t teach that in a German gymnasium), but one must assume the Taliban’s negotiators are entirely familiar with it.

LOL, I thought Obama had a bad case of Nevillism, but this is far worse.

Of course, the peace talks didn’t work out so well for Rabin…

“Nowhere in the world can a situation be resolved by military means alone.”

Odd to hear a German saying that. Military means alone resolved the situation with Herr Hitler pretty thoroughly. Perhaps he isn’t familiar with his country’s history … or since he’s part of Merkel’s group, perhaps he’s just a moron. Now that I think about it, if he really believes he can “make peace” with Islamic Supremacist losers, strike that “perhaps!