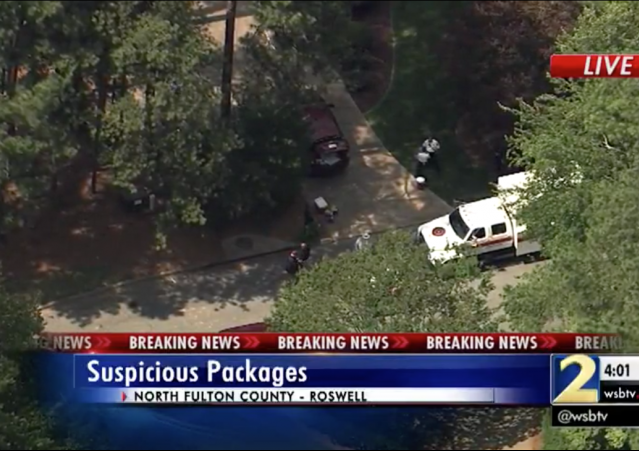 Thursday afternoon, a suspicious package was delivered to the home of Republican Congressional Candidate in Georgia’s sixth district, Karen Handel.

ROSWELL, Ga. – Authorities were called to the neighborhood where Karen Handel lives in Roswell after suspicious envelopes were found in mailboxes Thursday afternoon.

Police say Roxburg Drive off Old Alabama Road in the Country Club of Roswell is shut down while crews investigate.

At least five homes in the neighborhood received an envelope with a “white powdery substance” in it.

The FBI was called in to take the lead on the investigation.

The letter attached to the packages contains quite a bit of salty language:

Here is content of letter neighbors say went out in Handel's neighborhood. "Several" went out, says a woman in hoodhttps://t.co/frQGdICBip pic.twitter.com/B0BWku7eEU

“This afternoon we had some suspicious packages delivered to our house and to our neighbors. The packages contained threatening letters and a suspicious substance. The police were quickly notified and street is now being blocked off. We will continue to coordinate with law enforcement as necessary.”

Thankfully, no injuries or illnesses have been reported as a result of the packages.

The Ossoff campaign (the Democrat contender in the race) told local news, “that campaign staff and the Ossoff family have also received multiple threats of violence during this election.” As a result, they’ve hired a security detail and called for a “dedoubled commitment to civility and unity.”

This is getting out of hand. It cannot end well.

Also, what is the FBI doing there? Shouldn’t they be busy creating non-existent Trump memos and leaking them to the New York Times and WaPo?

What makes you think that they are not doing that too? Keep in mind that the FBI is a large organization, and can do multiple jobs for its Democrat masters at the same time. They can do CBW AND forgery and still cover up Democrat crimes.

I’ll believe Ossoff’s campaign was threatened when I see proof of it. But take a Democrat’s word for it? Not today, not ever.

Did anyone else notice that while Ossof calls for others to call for peace, he doesn’t once do so himself?

The hate on twitter is pretty substantial. They’re trying to call it a false flag operation or wishing she’ll take a big snort.

There seems to be little point in threatening a mere candidate.

The post office literally photographs the outside of every envelope. They will be able to find the person who mailed it.

Story doesn’t say it went through the post office, only that it was found in a mailbox.

Ossoff’s statement doesn’t directly condemn this act, which occurred in the district he’s running to represent. His statement merely says that he too is a victim. It’s inadequate.