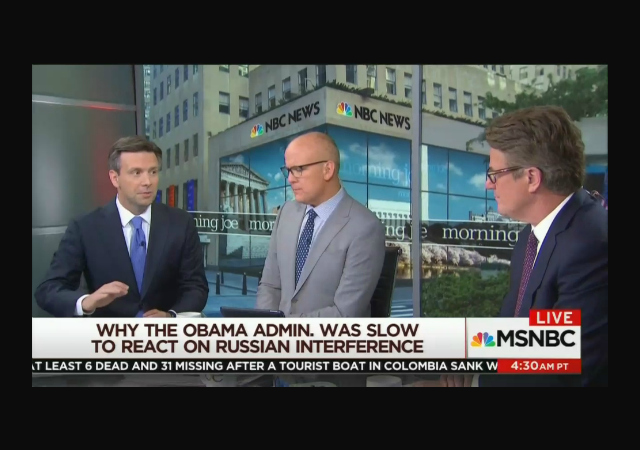 In a transparent attempt at blame-shifting, former Obama spokesman Josh Earnest has tried to place responsibility for President Obama’s failure to respond effectively to Russian meddling in the election . . . on Republicans.

It’s been reported that Obama was paralyzed into inaction by fears of seeming to help Hillary during the campaign. Appearing on today’s Morning Joe, Earnest said:

“The first time, [McConnell] didn’t have time to schedule time to talk about it. This is something that Republicans did not take seriously, and that did hamstring our efforts to respond to this as effectively as we would have liked.”

“Mitch McConnell basically threw cold water on it and said he was not convinced by the underlying evidence. The idea that Obama was feckless alone I think is revisionist history of the highest order.”

Earnest says that McConnell didn’t have time to schedule a briefing “the first time” the Obama admin proposed one. That suggests that McConnell, in fact, did meet with the Obama briefers, just not at the day and time that the Obama people initially proposed.

If President Obama truly felt it was in the national interest to respond forcefully to Russian meddling, it’s laughable for Earnest to suggest that the President was stumped by the timing of a McConnell briefing.

Moreover, Earnest admits that the Obama admin did not respond “as effectively” as possible.

Even more damaging to Obama is Brownstein’s defense, saying it’s “revisionist history” to say that when it came to dealing with Russian meddling, Obama was “feckless alone.”

Got that? Okay, sure, Obama was feckless. But he wasn’t feckless “alone.” Give that president a Profile in Courage!

Since when did Barracula need to say “pretty please” to the legislative branch in order to be the executive?

Come to think of it, when has Barracula even RECOGNIZED the legislative branch when it wasn’t convenient to his agenda?

Curiously, the battery in his phone died and the ink in his pen went dry that day.

“Mitch McConnell basically threw cold water on it and said he was not convinced by the underlying evidence.”

Note the two-step deflection here. By using the word ‘basically’ in his comment, Earnst frees himself up to describe McConnell’s statement in *any way he wants* while using the word ‘underlying’ as a qualifier for evidence leaves it up to the imagination of the listener to fill in the ‘correct’ dots.

I’m telling you Joe, it was those BEASTLY Republicans who kept the poor forlorn prez from doing something about those GHASTLY Russians!

He was able to do something about Global warming , something like Russian Collusion, that did not exist

Obama said there was no way to hack the election, told DJT to stop whining for saying the US election was rigged.

One citizen journalist’s idea of the Russian narrative and Obama wiretapping timelines. It’s a start.
https://www.reddit.com/r/The_Donald/comments/633nd8/important_pedes_i_have_put_together_the_russia/

So, when was the last time that Earnest came out from under his shell ?

There must be some real ‘butt hurting’ if Obama has to send out the “Rear Guard”.

Earnest is now an MSNBC analyst, so he turns up fairly often nowadays.

Notice that not a single Democrat pushing the “Russia Hacked Election” narrative has called for a return to paper ballots.

They have blown their wad, and have exposed themselves for the corrupt, cancer upon the nation that they are. Nothing they say or do matters anymore – no one but their useful idiot base is listening.

They have also inadvertently exposed Trump for what he is: a patriot with a genius for winning.

In this act of “The Impotence Of Being Earnest”, Earnest relates how the President’s pen ran out of ink and the battery in his phone died.

Socialism will NEVER work! In order to fake success, it cannot be accountable for failure/shortcomings, so it can’t be held for results.

I suspect the point of this report is to continue to bolster the lie about Russia hacking the election. Blaming Obama is convenient because now that he’s out of office there’s no political repercussion for him if he’s blamed for something, especially something which I don’t think happened.