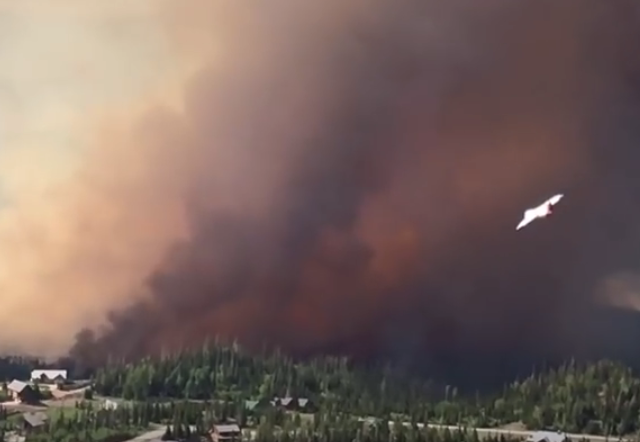 Eleven days after Utah’s massive Brian Head wildfire erupted, evacuated residents are poised to be given the all-clear signal to return home this Friday.

Approximately 750 people were evacuated from the mountain community shortly after the man-made blaze broke out on June 17. The Brian Head fire is now the largest active wildfire in the nation at 54,202 acres and only 10 percent containment.

But things aren’t looking so bad for Brian Head. Residents and visitors will have to enter through SR-14, but the businesses and hotels should be ready for customers and guests Friday morning. SR-143 will remain closed for the time being as crews perform additional clean-up.

South Central Communications is still working to restore fiber and phone lines to the town. It’s expected to be up and running later in the day Friday. Rocky Mountain Power has already brought electricity back to the entire town.

The hard-working firefighters and support personnel have worked heroically, and it appears that the local July 4th celebrations will go on as planned (just with no fireworks).

How did this wildfire get started? The initial fire began when a resident was burning shrubs around his cabin, and the flames got quickly out of control due to dry conditions, high temperatures, and wind.

Meanwhile, Iron County Attorney Scott Garrett said he received an investigative file from the Utah Division of Forestry, Fire and State Lands on Wednesday afternoon, and that his office will begin the process of screening potential criminal charges in connection with the blaze. Garrett added that it could take weeks to conclude the process.

As of Wednesday morning, the fire had burned more than 54,000 acres across two counties, and had destroyed 21 buildings, 13 of them residences.

At dawn Wednesday, an army of more than 1,600 firefighters, aided by a fleet of water- and retardant-bearing helicopters and air tankers, began shifting attention to the still out-of-control blaze’s northern front.

Firefighters will be battling this blaze for some time to come. Community leaders are angry, and many say that eco-activist environmental policies are really what ignited this inferno.

Mike Noel, a Utah State Representative, took aim at the the eco-activists who have decried logging and would “rather see the whole forest burn down than a single stump.”.

“When we turned the Forest Service over to the bird and bunny lovers and the tree-huggers and the rock-lickers, we turn our history over,” Rep. Mike Noel, R-Kanab, said during a news conference Monday in Brian Head.

The root vaude of the blaze, Noel asserted, is a buildup of fuels from a failure to log, especially expanses hit by bark beetles.

Noel compared two photographs — taken by Garfield County Sheriff Danny Perkins — that the lawmaker said proves the benefits of logging. One picture showed a logged area, depicted by tree stumps among unburned trees, while the other depicted an unlogged area that burned.

Of course, environmentalists disagree with the take:

Steve Bloch, legal director of the Southern Utah Wilderness Alliance, said Noel’s assertion is an over-simplification of wildfires that are the result of fire suppression, climate change, drought and unpredictable winds.

…Bloch said his group hasn’t challenged logging in the area of the Utah fire in two decades. But Noel says the lawsuit in the early 1990s delayed a Forest Service plan to get rid of an emerging cluster of bark beetles before it spread.

Of course, no eco-activist rant would be complete without Trump-hate:

Chad Hanson, co-founder the John Muir Project, co-authored a 2009 study that was one of the first to dispute the theory that bug-infested trees burn faster.

“That’s just logging industry propaganda,” Hanson said. “This is a direct outgrowth of the rhetoric of fear and hate coming out of the Trump administration. It has emboldened some very anti-environmental voices.”

Actually, what has emboldened American citizens is the continuous, progressive politicization of the sciences and the demonization of industry so that there is no trust in the “theories” of government experts. Americans will likely demand more sensible, people-first land management policies in the future.

Our prayers go out to the people of Brian Head, that the fire is contained soon.

I wonder if a class action lawsuit against the enviroweenie who used lawfare to block common sense precautions might be in order.

I’ve seen bug infested pines – they’re dry and brittle, because they’re dying. It doesn’t take Megamind to figure out that they’re going to burn a lot easier than healthy pine.

Just like it didn’t need a super-genius to figure out that wrapping English buildings in plastic wasn’t going to turn out well.

My wife and I took a short RV trip in southwest Colorado a couple weeks ago. There are area with miles and miles of dead trees. They are dead, dead, dead and will burn like a torch. Indeed, it shouldn’t take a super-genius to figure out that not removing them (or at least swaths of them to create fire breaks) is a bad idea. However, there are a lot of self-proclaimed geniuses who are quite capable of rationalizing a do nothing policy, all in the name of saving the environment.

notamemberofanyorganizedpolicital in reply to rabidfox. | June 29, 2017 at 5:23 pm

“Noel’s assertion is an over-simplification of wildfires that are the result of fire suppression, climate change, drought and unpredictable winds.”

Hanson said. “This is a direct outgrowth of the rhetoric of fear and hate coming out of the Trump administration.”

So one side has evidence of the consequences of not logging (brush, dead trees, etc.) and the “environmentalists” claim the fire is fueled by “hate” and “climate change.”

So, which side is “over-simplifying” Mr. Hanson?

The Repubs have the numbers they need to fix the Nat’l Forest Mgt Act, Federal Land Policy Mgt Act, Nat’l Enviro Policy Act, and the Endangered Species Act (along with the implementing regulations accompanying the aforementioned legislation). The aforementioned are the major federal legislation affecting federal land management and mismanagement (perhaps the Fish & Wildlife Coordination Act needs a tweak too). But they will not do it because they are too busy earning the moniker as The Stupid Party.

Based on the Executive Orders that I have read, the various Secretaries have been instructed to look at regulations to check to see if they fit the legislation. The next part will be to determine if the law is really required. Most of these reviews have a time frame (90-180 days).

There is a procedure that has to happen with reversing regulations and I’m sure there are even more issues with reversing major Acts. Just look at the issue with ACA.

Have you called your senators and representative to voice your concern and request that they start the repeal of these acts? Giving them specific examples of problems would be helpful as a start. That’s more productive than calling them names on a blog they may not read.

Explosives have long been used to fight fires, such as oil well fires, because the explosion creates a vacuum and eliminates the oxygen needed for a fire to burn just long enough. I believe that the US needs to consider using an air delivered explosive package similar to the older Daisy Cutter and newer MOAB (but of less explosive magnitude) to fight these big wildfires faster and at less expense. Obviously, it will only be one tool in the box and will not work everywhere due to potential collateral damage. But on the other hand, there will be times with the collateral damage to homestead buildings and small towns will be less than the direct damage of a raging wildfire.

Thermobaric weapons such as the fuel-air bomb are massively destructive primarily because of the massive shock-wave they produce, not the displacement of oxygen per se. They might be feasible for a very small fire, but those are the ones that can be handled by current methods. The mechanics of a large fire are such that a thermobaric would “blow out” only a small section of the front, which would likely reflash almost immediately, and there would be collateral damage on the backside of the blast cone.

The reason explosives work for oil well fires has to do with the mechanics of those fires; there is just a single fire point – the wellhead – that has to be extinguished. Forest fires have fronts that can and often do involve involve fronts that are many thousands of feet in length. Apples and oranges, I’m afraid.

Since I live in Black Forest where we had a huge fire a few years ago (just under 500 homes burned, including 25 from members of my church), I am kind of sensitive to fire dangers and to fire mitigation. We had to evacuate, but the fire got no closer than 1 mile from our home.

Mitigation: clear out all dead wood and trees, thin or remove low clusters of brush, don’t let grasses grow too high, rake the dead pine needles regularly, no trees overhanging the house, flammable stuff off porches and decks, and more. And I never burn anything, except charcoal in a covered grill, and even then not if it is very windy. Burning brush? No way.

Leaving huge stands of dead trees is just asking for trouble. It turns out we have not just pine bark beetles, but also spruce beetles. The forest service is harvesting some dead trees but vast numbers remain. The biggest service environmentalists could perform would be to find good uses for these dead trees, and to go out, harvest them, and plant new ones to replace the old. But that would be work. Better to just protest and “let nature take its course.”

A final note: after the Black Forest fire, is was almost shocking to see how many houses survived – ones well mitigated – while everything around, including other houses, completely burned. Mitigation works even it it doesn’t guarantee.

A few years ago when they had the big fires in Victoria, Australia the green regulations at the time all but guaranteed the carnage that eventuated.

Fast forward a few more years and we have the gold coast floods made worse by environmental regulations that stopped lakes levels from being lowered because of the impact on the environment!

And present day where Labour’s climate change act lead to the horrendous fire in London a few weeks ago because environmental regulations forced building owners to clad their buildings in sh1t that turned them in to great big f67k off chimneys funnelling flames and heat upwards!!

He can even start forest fires in Utah from DC. Big matches that man carries.