“I can’t say enough about the bravery of the homeowner.” 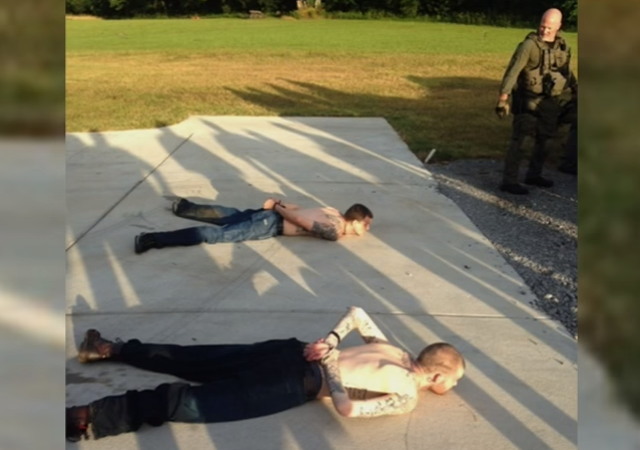 Here’s a feel good story for the week. Two inmates who escaped from a Georgia prison this week were captured by an armed civilian who held them at gunpoint until the authorities arrived.

A Tennessee homeowner held two escaped inmates wanted in the killing of two prison guards at gunpoint Thursday until authorities arrived and made the arrests.

Miller says the escaped Georgia inmates had crashed a car while being chased by law enforcement and fled on foot into woods along Interstate 24 near the rural community of Christiana.

Miller says something alerted the homeowner that people were outside his home and he saw the men trying to steal his vehicle. The trooper says the homeowner held the two at gunpoint with a neighbor he called until the Rutherford County Sheriff’s Department could get there to arrest them.

Rowe and Dubose are accused of killing two guards on a prison transfer bus early Tuesday. Authorities had offered a $130,000 reward for information leading to their arrests.

Bre Payton has more at The Federalist.

Here’s a video report from the Associated Press:

Even CNN was forced to commend the bravery of the armed homeowner:

The bravery of a homeowner put an end to the three-day long manhunt, Fitzhugh said.

The inmates had run through the woods to a home on Pruitt Road, near the rural community of Christiana.

“The homeowner was alerted somehow, he looked outside and saw the suspects trying to steal his vehicle,” Lt. Bill Miller from the Tennessee Highway Patrol said late Friday.

The homeowner called his neighbor and both men, each armed with a gun, confronted the fugitives.

Having lost their weapons in the crash, Dubose and Rowe surrendered, authorities said.

“I can’t say enough about the bravery of the homeowner, and what they took on, the wherewithal to call us and give us the information so we could get over there and apprehend these two subjects,” Fitzhugh said.

Contrary to the left’s constant protest, there really are good guys with guns.

So when do they get the reward?

Nice story but it’s just another, not so true, story. That according to the homeowner himself at the news conference.
He did have a gun but never showed it and they just gave up for some reason. They lost their guns in the car crash or more likely had run out of ammo firing at the cops chasing them. Maybe they thought if they got rid of them nobody would find them. Not the smartest guys.

I wish it’d have refreshed the comments instead of spending so much time listening and trying to make sure I got the quote correct! You’re exactly right and if I’d have seen your comment mine would have been a lot shorter.

This is an important story – thank you for posting it.

Meanwhile, I think it should be noted: the homeowner says In a statement linked below, “I had a weapon on me but I never had to draw the weapon as had been released in the news.”

Apparently, the two criminals surrendered themselves willingly to the homeowner:

“For some reason, they started to surrender and lay down on their stomachs on my concrete driveway. If that doesn’t make you believe in Jesus Christ, I don’t know what will.”

Obviously, I’m not saying this to diminish the amazing courage of the armed homeowner but rather to commend his faith and to provide some additional details that CNN may have missed.

Indeed, “..there really are good guys with guns.”

“I had a weapon on me but I never had to draw the weapon as had been released in the news.”

Let me get my head around this: A homeowner approaches two men trying to steal his car and he does not draw his weapon. Even if he had not considered that they were the escaped cons who murdered two guards, do you really walk up on two men like that?

I’d be curious about the local guns laws where this happened. Maybe the homeowner was afraid of getting into one of those cases where he pulls a weapon in self defense and the local leftist yahoo DA charges him with brandishing and whatever else he/she could throw on him.

Local gun laws? Here in TN we can shoot anyone that comes on our property and represents a “threat” to us and our family’s safety. Being that these were two escapees and looked rather ragged, there would seem to be little doubt that someone’s safety was at risk. Also, you don’t necessarily have to draw you gun for it to be a threat especially when the other person has no weapon. (Typically, around here we do not draw our gun unless we are going to use it. To many risks for an accident to just draw it to point it at someone.) Lastly, when the homes the the San Bernardino terrorists was searched the media and locals were horrified to discover that there were 5,000 round of ammunition present. They called it an “armory”, but here in TN we just call that a good start.

It was the only thing I could think of that might prevent a homeowner from drawing a weapon in self-defense. We have the Castle Doctrine here in NC, very similar to or same as TN apparently.

If I’d caught these animals in my garage I’d have shot the one to keep the other in line till the po-po arrived.