This could become a game changer in the grocery sector. 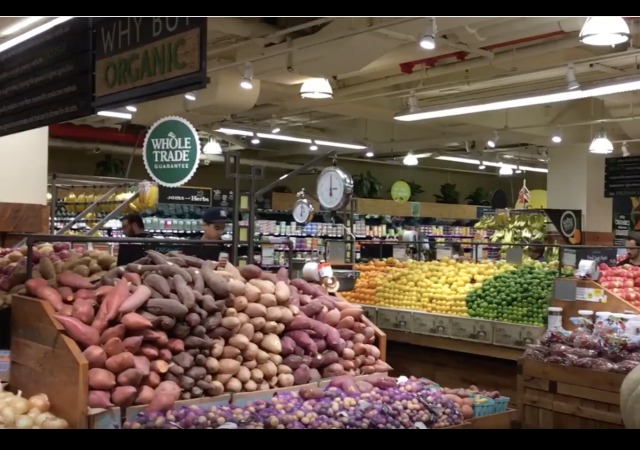 Amazon has purchased Whole Foods for $13.7 billion, which will allow the online giant to step into the grocery store sector. Amazon officials have stated in the past they want to expand into groceries. From Bloomberg:

Amazon agreed to pay $42 a share in cash for the organic-food chain, including debt, a roughly 27 percent premium to the stock price at Thursday’s close. John Mackey, Whole Foods’ outspoken co-founder, will continue to run the business — a victory after a fight with activist investor Jana Partners that threatened to drive him from power.

Mackey will remain as CEO of Whole Foods.

Cooper Smith, who watches Amazon at research firm L2, explained to The Seattle Times that Amazon “has to get into groceries” if the online store wants “to sustain its current growth rate.”

Smith stated that Whole Foods could become a “potent weapon” with Amazon, especially against Wal-Mart, “which dominates the grocery world and has been stepping up its e-commerce game.”

But stores have not found a way to make grocery shopping online a major success since people want “to pick their own produce” and retailers need to find a way “to deliver perishable, fresh and frozen food to people’s homes.”

Amazon has AmazonFresh, which debuted in 2007, but has not caught on well with the public. Whole Foods gives Amazon “a network of stores where it can implement decades’ worth of experiments in how people pick, pay for and get groceries delivered.” From The Seattle Times:

“Millions of people love Whole Foods Market because they offer the best natural and organic foods, and they make it fun to eat healthy,” said Jeff Bezos, Amazon founder and CEO, in a statement. “Whole Foods Market has been satisfying, delighting and nourishing customers for nearly four decades – they’re doing an amazing job and we want that to continue.”

The move hit the stocks of other grocery chains, including Wal-Mart. From The Wall Street Journal:

“For other grocers, the deal is potentially terrifying,” Neil Saunders, managing director of consultancy GlobalData Retail, said in a statement. “Although Amazon has been a looming threat to the grocery industry, the shadow it has cast has been pale and distant. Today that changed: Amazon has moved squarely onto the turf of traditional supermarkets and poses a much more significant threat. The only mitigation is that the more niche appeal of Whole Foods will, at least for the time being, limit the threat to other players.”

The grocery market, a $750 billion sector in the U.S., is one of the few provinces in the retail world that Amazon hasn’t managed to radically alter.

I have some friends who are devout organic food buyers, and who consider Amazon the source of all evil.

They’re going to be somewhat conflicted.

their conflictedness is my devilish delight….need good humor after missing out on buying amazon.

How is adding WFM, the most over priced grocery chain in America, to AMZN a threat to Walmart, the nation’s low cost grocery retailer?

AMZN is an amazing company but this one is a head scratcher.

I wonder if they will give a senior discount on Prime? I’m going to ask when it comes due in a few months…

I’m old, born in a small town, and I remember when my mom would pick up the phone and order a list of items from the local grocery store and they would be delivered to the house in a couple of hours.

If Amazon, or anyone else, can replicate that kind of service at a fair price they will have a real winner.

You have to put in your order through a computer and schedule a delivery window (which can’t be same-day but can be next-day, or next week) but it’s a pretty good equivalent. Prices are relatively normal grocery store prices, a little low or a little high depending on which type of good (perishables are proportionately more) — but my standard of comparison are New York City grocery stores.

I’ve used this to have food waiting for me on the porch (the perishables in insulated containers) when my family got home from a trip.

Note that Amazon is not the only grocery service which will do this, but I believe it is the cheapest.

I get 95% of my groceries from Amazon Fresh: they deliver on my doorstep within a 3 hour window (sometimes they’re late, but I’m in New York City; traffic is unpredictable and sometimes terrible) for a flat $15/ monthly (requires Prime, minimum $40 order.) The groceries are *mostly* competitively priced, and I will pay $15 a month just for having SOMEONE ELSE carry the heavy stuff home — but I save a lot of time, too, and I like having my grocery list be in my shopping cart.

It’s far from perfect – availability of some stuff comes and goes, and I loathe the way now-unavailable stuff silently vanishes from my shopping cart, depriving me of the ability to just order another brand when applicable – but it’s already a better deal for me than the local stores (which I still go to sometimes.)

I hope it puts Thrive Market, out of business. The management at Thrive Batesville deserve everything bad that could ever happen to them.

This is going to create a problem for the Washington Post.

Both would be owned by Amazon or Jeff Bezos (whatever).

With Trump already to drop an anti-trust action on Amazon, they are now walking into the machine-gun.

Methinks Amazon is getting to big to succeed.

Amazon seriously thinks that Whole Foods – THE upscale market nationwide with prices to match – is going to compete with Walmart?

Also note that Amazon is currently offering Food Stamp recipients the chance to buy Prime for $6.99 a month – and use their Food Stamps to buy groceries on Amazon. Two things:

It is against the law for any entity to charge Food Stamp recipients any type of fee to use their food stamps.

It is well known that Amazon datamines what you look at, buy and so forth and sells the data. If you were on Food Stamps – something that the government is not allowed to reveal to anyone – would YOU want Amazon to aggregate that in with your data? I sure wouldn’t.

My thoughts run along the same lines. For the most part, people who shop at Wal-Mart do so because they’re trying to stretch their food dollars. People who patronize Whole Foods are (at least this is the impression I get) into organic this, gluten-free that, non GMO foods, and other trendy food fads. Methinks the intersection of these two groups is rather small.

I would think this development poses a greater threat to PeaPod or Schwan’s. Their customers have already bought into the home delivery grocery service model. Not so much Wal-Mart customers.

I’ve had Amazon Prime since it started. Every now and again I check their grocery prices, particularly ‘dry’ goods like TP, Scott towels, canned goods, coffee, cleaning products, etc. As yet, their prices were too high, uncompetitive with our local Piggly Wiggly and Food Lion stores. I don’t see that changing, given Whole Foods prices. I do believe Amazon will eventually find the formula to make this work.

RE: Offering a $6.99/month Amazon Prime rate to food stampers is not that much of a deal. The full price is $8.25/month or $99/year. Since a food stamper would need a computer and internet connection to use the service, I’m guessing getting a buck and a quarter a month off Amazon Prime isn’t such a big deal.

Have you tried Prime Pantry yet?

13.7 billion? Heck, if they had waited for the weekend and found a coupon, I bet they could have gotten it for under 12. And if they used their card, that’s another couple of percent off.

I would only use the Amazon food delivery if I was sick and could not get out of the house. Otherwise, shopping is not a hassle for me and I like going around the store looking for new items.

But, I live in middle America and I have a full pantry.

Prime Pantry is a dud for me mostly because the prices aren’t that good, especially on anything liquid like sodas or juice.

I just don’t see the threat to other grocers.

For the past 10 years I’ve lived in New York City and New Jersey. The major regional grocery chain, A&P, which under one brand or another owned almost every supermarket in the region, has bankrupted twice during that time despite closing low-producing locations. There are already too many options to support the population of shoppers, at least in this area. And no, that is not a good thing when the result is the shutting down of ALL options within, say, a 10-mile radius, as has happened in NJ. What are people without cars supposed to do–spend $80 on round-trip cab fare when they need to go to a supermarket?

So the threat is not just to other grocers, it’s a threat to shoppers. Before long A&P will be dead for good and it will be Amazon or nothing. You may be OK with Amazon becoming the widest-reaching monopoly in history and Jeff Bezos the richest assclown in the world, but I’m sure not.