Occurred at Hanford Nuclear Reservation, where plutonium for weapons was produced for decades. 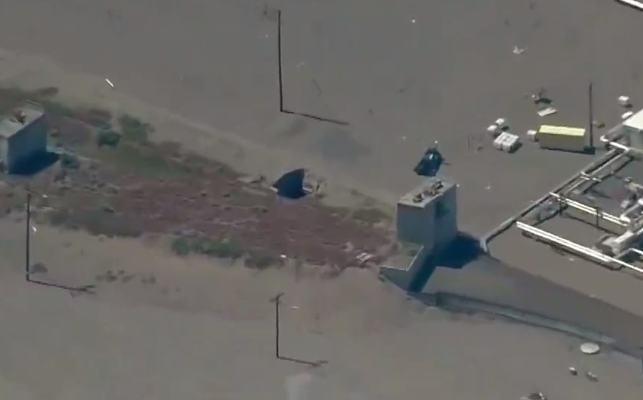 Hanford Nuclear Reservation made plutonium for nuclear weapons for decades and is now the largest depository of radioactive defense waste that must be cleaned. There was an emergency situation at this site in Washington state after a tunnel full of highly contaminated materials collapsed.

Officials say a collapsed patch of ground above the tunnel was larger than first believed. The U.S. Department of Energy said the collapse covered about 400 square feet (37.1 square meters) instead of the 16 square feet (1.4 square meters) first reported.

…The agency says the rail tunnels are made of wood and concrete and are hundreds of feet long, with about eight feet (2.4 meters) of soil covering them. The U.S. Department of Energy says the incident caused the soil above the tunnel to sink between 2 and 4 feet (half to 1.2 meters).

They were originally constructed to hold rail cars that were loaded with contaminated equipment.

Hundreds of workers were told to go into a “take cover” position after the tunnel in a plutonium uranium extraction (PUREX) plant collapsed. No one was injured and officials say no radiation was released.

No workers were inside the tunnel when it collapsed, and other workers who were ordered to shelter-in-place were later sent home early as a precaution, Hanford said. “Workers continue to monitor the area for contamination as a crew prepares to fill the hole with clean soil,” Hanford said in a news release.

The cause of the collapse was not immediately known. It was discovered during a routine inspection and occurred during a massive cleanup that has been under way since the 1980s and costs more than $2 billion a year. The work is expected to take until 2060 and cost more than $100 billion.

There are calls from a member of the House Energy and Commerce Committee for an Energy Department brief the panel on the cause the collapse.

New Jersey Rep. Frank Pallone said the incident underscores the need for the Department of Energy to take all necessary precautions to ensure the safety and security of workers.

The committee oversees the Energy Department’s management of cleanup efforts at the Hanford Nuclear Reservation 200 miles southeast of Seattle.

…Pallone said the Energy Department should provide details on the implications of the incident on continuing cleanup efforts.

Energy Secretary Rick Perry has been briefed on the situation was told the agency will continue to monitor the situation.

Remember in 2008 when someone asked Obama about Hanford? (it’s on youtube)

He didn’t know what it was nor that it was a superfund site.

This makes me feel so good about the plans for building a nuclear waste processing plant (instead of simply a storage dump as previously discussed) at Yucca Mountain in Nevada.

Well that’s not good. I wonder if that train car glows in the dark? Supposedly they can still pick up the train cars that were buried after the Chernobyl incident on satellite today.

What I wonder is how much money did they receive to upgrade their facilities and how much was diverted to other projects.

Funny thing…there is not and never will be a “perfectly safe” source of energy.

One of the things that makes “nucler” energy and stuff so expensive is the boogeyman that goes with the name. A lot of “nucler” waste is quite benign.

It does suggest a two birds solution to smuggling tunnels. Maybe in Korea too.

This should provide enough irrational fear of all things nuclear to prevent any progress in nuclear technology for another decade. Such exciting times ahead.

Looks like DOE hired from the same place EPA hired from for the Animas River toxic waste spill.