I have written a lot about “intersectionality” theory, particularly how it is used to single out Israel by making Israel the nexus of all oppression in the world regardless of the issue:

Every real or perceived problem is either blamed on or connected to Israel.

The Jew once again is made the source of all evil, the conspiratorial puppet-master controlling all and responsible for all. And Israel alone receives such treatment and is used as the link to connect all injustices in the world.

While Israel and playing upon centuries-old anti-Semitic stereotypes is a prominent manifestation of intersectionality as it plays out on campuses, there is a more general phenomenon.

Intersectionality is the intellectual hammer used to beat every perceived campus heretical nail.

Weinstein explained in an Op-Ed in The Wall Street Journal how this developed, The Campus Mob Came for Me—and You, Professor, Could Be Next:

I was not expecting to hold my biology class in a public park last week. But then the chief of our college police department told me she could not protect me on campus. Protestors were searching cars for an unspecified individual—likely me—and her officers had been told to stand down, against her judgment, by the college president.

Racially charged, anarchic protests have engulfed Evergreen State College, a small, public liberal-arts institution where I have taught since 2003. In a widely disseminated video of the first recent protest on May 23, an angry mob of about 50 students disrupted my class, called me a racist, and demanded that I resign. My “racist” offense? I had challenged coercive segregation by race. Specifically, I had objected to a planned “Day of Absence” in which white people were asked to leave campus on April 12.

… Evergreen has slipped into madness. You don’t need the news to tell you that—the protesters’ own videos will do. But those clips reveal neither the path that led to this psychosis, nor the cautionary nature of the tale for other campuses.

Weinstein then explains that what preceded the attacks on him was a plan proposed by the administration to impose a faculty hiring plan that was tantamount to a minority faculty hiring quota system:

It would would shift the college “from a diversity agenda” to an “equity agenda” by, among other things, requiring an “equity justification” for every faculty hire.

The plan and the way it is being forced on the college are both deeply authoritarian, and the attempt to mandate equality of outcome is unwise in the extreme. Equality of outcome is a discredited concept, failing on both logical and historical grounds, as anyone knows who has studied the misery of the 20th century. It wouldn’t have withstood 20 minutes of reasoned discussion.

This presented traditional independent academic minds with a choice: Accept the plan and let the intellectual descendants of Critical Race Theory dictate the bounds of permissible thought to the sciences and the rest of the college, or insist on discussing the plan’s shortcomings and be branded as racists. Most of my colleagues chose the former, and the protesters are in the process of articulating the terms. I dissented and ended up teaching in the park.

That last language is critical, so I’ll repeat it:

Accept the plan and let the intellectual descendants of Critical Race Theory dictate the bounds of permissible thought to the sciences and the rest of the college, or insist on discussing the plan’s shortcomings and be branded as racists. 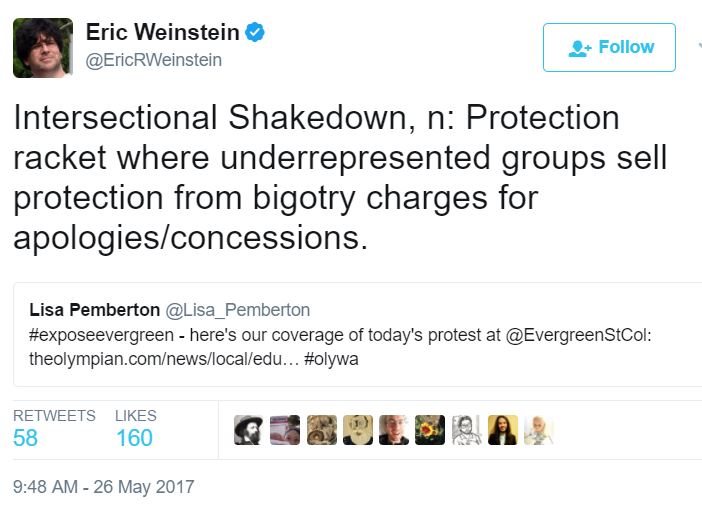 That’s incredibly perceptive, and a way of looking at it that I had not thought of before, at least not in that language.

False accusations of bigotry are a major tool of the intersectional left. We saw that at Cornell, where union student organizers falsely smeared distinguished Chemistry professor David Collum as a “rape apologist,” misogynist, transphobic, and so on, in what appeared to be retribution for Collum speaking out against the unionization effort. The message to other faculty was clear: Submit to progressive demands, or your reputation will be destroyed.

I addressed this issue in my post regarding Prof. Collum, Price for speaking against campus left “might be your reputation”

The Intersectionality Shakedown method is particularly effective because it targets the people who are not what they are accused of being: Eric Weinstein is not a racist, and David Collum is not a rape apologist or any of the other things he was accused of being. So they actually are damaged by and afraid of the accusations, whereas people who actually were those things likely would not care.

In these circumstances, the silence of peers helps the aggressors.  Other faculty at Evergreen have acted cowardly in failing publicly to come to the defense of Prof. Weinstein, and I was the only Cornell faculty member (to my knowledge) willing publicly to take on those attacking Prof. Collum.

The Intersectional Shakedown will continue to work so long as it is permitted to isolate its targets, and cut them off from support.

progressivism is an airborne mental disease – transmitted by HUGE AMOUNTS of hot air!

This business was perfected by Jesse Jackson, glammed onto by Al Sharpton, and now every other leftist.

The reaction to this has to mirror the leftist’s demands to corporations: either they see it our way, or they can have the leftists as its loser customer base – but not u$.

“Progessivism”, correctly understood, is a secular cryptoreligion. As such it naturally includes both the ostracism of heretics and the selling of indulgences.

So, not all liberals are on board with the progress of [class] diversity schemes and the protection rackets that have coincided with them.

Beginning with two moral axioms or articles of faith: individual dignity and intrinsic value (from conception). It is our challenge, if we should accept it, to reconcile moral, natural, and personal imperatives, to realize a philosophy that is internally, externally, and mutually consistent.

Sounds like the AGW protection racket where the biggest polluters, China and India, can buy carbon credits from racketeers who keep shipping jobs, capital and technology to them at the expense of the cleanest, most modern industrial economy in history. Well done!

Exactly, Phil. The AGW movement is as religious as it gets, and the selling of indulgences is a very big business.

So, scour yourself and repent your sin of “privilege” for their pleasure, and be rewarded with another round of scouring and repentance the next day?

Hmmm, would you say that the Mark Zuckerbergs and Warren Buffetts of the world learned early on that the Left’s “protection racket” was worth participating in? I remember when Bill Gates thought that Microsoft didn’t need lobbyists or to do anything but make a good product, but the Clinton Justice Department showed him how wrong he was.

“False accusations of bigotry are a major tool of the intersectional left.”

But, “accusations” seems too generous a word for what is essentially name-calling.

That is, “accusation” implies that one has started with a evidence to support a set of factual claims, and then applied logical argument to these claims to reach stated conclusions. Yet accusers here offer none of this, but jump immediately to the accusatory conclusions.

Is it truly asking too much to expect faculty to explain the elements of reasoned argument, and for faculty and administrators to explain that that’s what expected on campus? And therefore mere name-calling (but not violent behavior, or credible threats of violence) will (and should be) be ignored?

If this is all that can be expected (and especially when that name-calling is backed with threats or actual violence), then surely it is time for our elected representatives to consider whether such institutions are failing in their essential purposes and thus undeserving of public support?

Is it truly asking too much to expect faculty to explain the elements of reasoned argument, and for faculty and administrators to explain that that’s what expected on campus?

On the Evergreen campus (at least) it certainly is too much to ask. Note that its president has bought into the racket and sided with the Red Guard students against the campus police chief and Professor Weinstein.

I think the State Legislature needs to haul this corrupt president into an investigation and get some answers from him – if not just summarily firing him.

Remember “Kafkatrapping”? What is happening to Bret is similar.

Jesse Jackson’s made an entire career of of #Shakedown.

Any college president who tells the campus police to stand down should be fired on the spot.

Correction: There is nothing “progressive” about the Left. They are totalitarians and their agenda is regressive in the extreme. Therefore, it would be more helpful to accurately describe the Left as the Regressive Movement.

Black students have been indoctrinated to believe they are entitled to a college education, entitled to college admission with lower grades as in affirmative action, and entitled to graduate with sub standard grades.

Now why is anyone surprised that they are making demands based on their entitled status and abysmal ignorance ?

Why do you think there are laws that force people to hire them?