Other investigations may keep Assange at the Ecuadorian embassy. 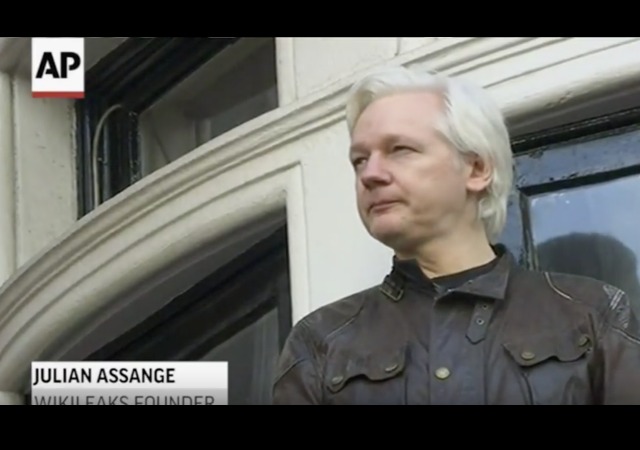 Five years ago, Wikileaks founder Julian Assange sought refuge at the Ecuadorean embassy in London after Sweden launched a rape investigation against him.

Today, Swedish officials have dropped the investigation. From The Local Sweden:

In a statement on its website, the Swedish prosecution authority said that the “Director of Public Prosecution, Ms Marianne Ny, has today decided to discontinue the investigation regarding suspected rape (lesser degree) by Julian Assange”.

“With the consideration that all options of moving the investigation forward are now exhausted it appears that – in light of the views expressed by the Supreme Court (Högsta domstolen) on the proportionality of remanding someone in absentia – it is no longer proportional to maintain the decision to remand Julian Assange in his absence and maintain the European arrest warrant,” Ny wrote in her notification to Stockholm District Court.

“I have therefore today lifted the decision to remand Julian Assange in his absence,” she added.

Swedish law demands investigators “to formally serve assange with notice of the suspicions against him.” Ny explained that in order to serve those suspicions, the officials needed “full voluntary participation” from Assange since “Ecuador granted legal assistance” to him. She continued:

Formal issues are important in a legal system in terms of legal certainty, it is important to be able to serve the suspect with suspicions. The decision to discontinue the investigation is not because we’ve been able to make a full assessment of the evidence, but because we didn’t see possibilities to advance the investigation. So we won’t make any statements on the issue of guilt”.

Assange spoke from the Ecuadorian embassy:

Addressing a crowd from the embassy’s balcony in central London, Assange accused the UK authorities of ignoring international laws on asylum, a position he described as “untenable”.

He said: “We have today won an important victory, but the road is far from over. The proper war is just commencing.”

“The claim that the UK has the right to arrest me for seeking asylum in a case where there have been no charges is simply untenable.

“My legal staff have contacted the UK authorities and we hope to engage in a dialogue about what is the best way forward.”

So just because Sweden dropped case, it does not mean Assange can just pack up and leave the embassy since he has a warrant against him in the UK and the U.S. may press charges against him. From The New York Times:

In Britain, he still faces a warrant for failing to appear in court, and the Metropolitan Police in London said on Friday that they would arrest Mr. Assange, who has maintained his innocence, if he were to try to leave the embassy.

Moreover, the Justice Department in Washington was reconsidering last month whether to charge Mr. Assange for his role in the disclosure of highly classified information. A Justice Department spokesman declined to comment on whether it planned to take any action regarding Mr. Assange, and the British government declined to say whether it had received an extradition request from the United States.

Assange’s lawyer Melinda Taylor said that his team wants to receive guarantees from UK officials that Assange “won’t be seized in some other ways.” The Metropolitan Police stated that officers have an obligation “to arrest Assange should he leave the embassy.”

The US and UK will not confirm or deny if American officials have already requested extradition of Assange to the states.

In April, sources said that federal prosecutors started to consider pressing charges against Assange and other members of Wikileaks. The case could go all the way back to 2010 when the whistleblowing site published “diplomatic cables and military documents” to present day when it published the CIA’s hacking operations in March.

Former President Barack Obama’s Department of Justice chose not to pursue action against WikiLeaks because they concluded “that doing so would be akin to prosecuting a news organization for publishing classified information.” Plus, those officials decided they would face difficulties to bring about those charges since other organizations published the 2010 documents from U.S. Army intelligence analyst Bradley (Chelsea) Manning.

The prosecutors also found it difficult to determine “whether the First Amendment precluded the prosecution of Assange.”

Officials within the DOJ have started to draft “a memo that contemplates charges against members of the WikiLeaks organization, possibly including conspiracy, theft of government property or violating the Espionage Act.” However, those at the top of the DOJ will need to sign off on any charges against WikiLeaks like Attorney General Jeff Sessions.

He embarrassed the Deep State and for that he must be punished.

We are getting a slightly different message from SVT(Swedish Govt. News). The preliminary investigation is suspended, the EU warrant has been requested to be vacated, the evidence against Assange is still as strong as ever according to the prosecutor and if Assange returns to Sweden prior to the Statute of limitations on charges sometime in 2020 he could be arrested. It seems things are still up in the air right now.

Additionally there is Swedish Wacko Criminal System jabber questioning if Assange may be due compensation payment.

On the other hand this past week here in Sweden: I recall that a couple of guys were sentenced for about 2yrs in prison for video piracy which is a hell of a lot more than most rapists are sentenced.

…Or, someone wants him to walk outside as a “free man at last” so he can be Clintoned in a dark alley some where…

If Assange can prove that the Clinton/Democratts’e- mails came from
Seth Rich, he ought to be able to strike a deal with Trump. Seems the two of them could benefit extremely well from cooperation.