Named after Dalal Mughrabi, who led killing of 37 civilians, including 12 children 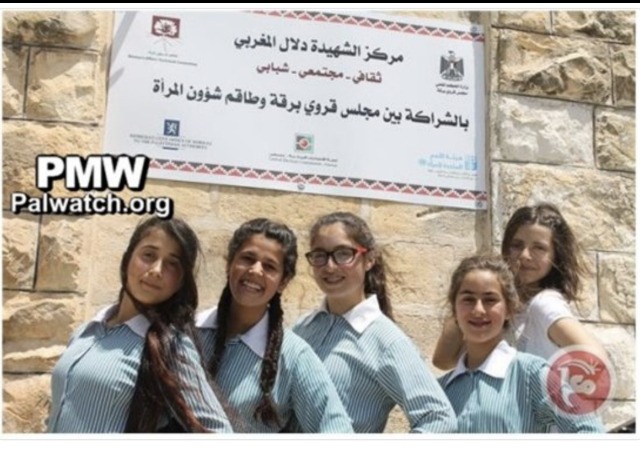 Has the world ended? The UN has actually lashed out at the Palestinian Authority after the Palestinian NGO “Women’s Technical Affairs Committee” (WTAC) named a women’s center after terrorist Dalal Mughrabi, a member of the Fatah faction of the Palestine Liberation Organization. Norway stepped in as well, demanding the PA refund money the country donated for the center and remove the country’s name.

Mughrabi led and participated in the 1978 Coastal Road Massacre. She and other terrorists “hijacked a bus on Israel’s Coastal Road and killed 38 civilians, 13 of them children, and wounded over 70.”

The Palestinian Authority has a deep affection for the terrorist since it has named three schools and a computer center after her. It has even thrown birthday celebrations for her. 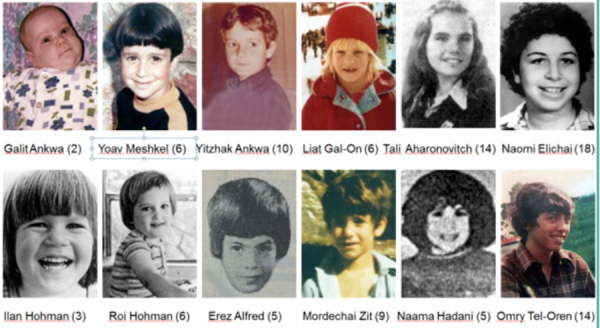 These are the children that Mughrabi murdered. (Credit: Palestinian Media Watch)

Palestinian Media Watch (PMW) reported that the center will educate people on Mughrabi, as described by someone from the village council:

“Reem Hajje, a member of the village council, noted that the center will focus especially on the history of the struggle of Martyr Dalal Mughrabi and on presenting it to the youth groups, and that it constitutes the beginning of the launch of enrichment activities regarding the history of the Palestinian struggle.”
[Ma’an, independent Palestinian news agency, May 15, 2017]

The building proudly displays the logos of the PA Ministry of Local Government, UN Women, and the Norwegian Representative Office to the PA.

Norway even boasted about its collaboration with the PA over the center:

“The Norwegian Representative Office (NRO), along with Norwegian cultural institutions, are among the main cooperation partners in the culture sector in Palestine. The NRO culture program includes supporting cultural rights and increasing the capacity of the culture sector, through civil society organizations that can play the role as agents of change, in cooperation with the Ministry of Culture.”

PMW noted that the WTAC website names UN women as a partner while the “NGO Monitor has documented that UN Women is a donor of the WATC.”

Now it appears that the UN will *hopefully* take a harsher stance against the Palestinian Authority when they try to glorify terrorists. From The Jerusalem Post:

“The glorification of terrorism or the perpetrators of heinous terrorist acts is unacceptable under any circumstances,” read a statement by a representative for UN Secretary-General António Guterres. “The UN has repeatedly called for an end to incitement to violence and hatred as they present one of the obstacles to peace.”

The UN statement came a few hours after Alon Bar, the Foreign Ministry’s deputy director-general for the United Nations and International Organizations, spoke with Robert Piper, the UN Coordinator for Humanitarian Aid and Development Activities in the territories, and expressed “grave concern” that UN institutions were connected with efforts to glorify terrorists.

The logo of UN Women, an organization that deals with gender equality and the empowerment of women, together with that of the Norwegian Office to the PA appeared on a sign at a women’s center in the West Bank village of Burka that was named after Mughrabi.

Bar related to Piper that Israel has demanded “an explanation for the funding of a center after terrorists.” Bar also hopes that the UN will take immediate action “to ensure that this will not happen again.

Guterres’s representative also insisted that the UN “disassociated itself from the center once it learned the offensive name chosen for it and will take measures to ensure such incidents do not take place in the future.”

He also stated that the UN demanded the center remove the UN Women logo “and noted that the center’s inauguration took place after the United Nations ended its association with it.”

“I think there is a state of mind in the world now that is no longer willing to accept these things,” the official said of the naming of the center for Mughrabi.

“Until now, people closed their eyes and did nothing,” the official added. “Now the situation has changed, and I think it is a combination of two things. It is a change that began with Guterres, who took over on January 1, and it continued afterward with the election of Trump and the appointment of Haley.”

As mentioned above, Norway has also denounced the center and wants a refund. Officials has insisted that the country did know that the NGO would name the center at Mughrabi. From Times of Israel:

“The glorification of terrorist attacks is completely unacceptable, and I deplore this decision in the strongest possible terms. Norway will not allow itself to be associated with institutions that take the names of terrorists in this way. We will not accept the use of Norwegian aid funding for such purposes,” Norwegian Foreign Minister Borge Brende said in a statement.

“We have asked for the logo of the Norwegian representation office to be removed from the building immediately, and for the funding that has been allocated to the center to be repaid,” he said.

Brende stated that Norway will no collaborate with the PA on “similar projects” unless they can assure the country “that nothing of this nature happens again.”

“Norway took the right step — a tough line against memorializing terrorists is an integral part of the international effort to eliminate terror. We recommend that the international community take thorough steps to check where the money it invests in the PA is going.”

Mughrabi and 13 Fatah terrorists organized and executed the 1978 Coastal Road Massacre in Tel Aviv, Israel, on March 9, 1978. Two of the terrorists drowned when their craft capsized in a boat that headed to Israel from Lebanon. 11 survived and landed on a beach where they asked American photographer Gail Rubin for directions to Tel Aviv. In 2009, terrorist Khaled Abu Asba said that Mughrabi killed Rubin. From Haaretz:

Asked about the American nature photographer Gail Rubin, who was killed there while taking pictures, Abu Asba attributes her murder to Dalal Mughrabi, the lone female in the group.

Of Rubin, Abu Asba says, “We worried she’d tell on us. We didn’t know she wasn’t Israeli. We went out to the road and we stopped the first bus. We got on and started traveling south, and we explained to the driver, who spoke some Arabic, what he had to do.”

The terrorists hijacked a bus to Tel Aviv, from which they shot and threw “grenades at passing cars, at one point throwing a body from their commandeered bus.” On the way to Tel Aviv, “the terrorists managed to stop another bus, ordering its passengers to pile into the first bus.” Police tried a roadblock, but the terrorist ran right through it until they reached just north of the city. From The Jerusalem Post:

This second roadblock, much larger in size and aided by nails that officers spread on the highway finally managed to bring the rolling terrorist attack to a standstill. The carnage, however, was far from over.

The police traffic and patrol units that arrived on the scene were not specially trained to deal with terrorist or hostage situations. As the bus came to a stop, a firefight broke out between lightly armed officers and the terrorists who had brought sub-machine guns, grenades and explosives. As heavy gunfire was flying in all directions, police broke the windows of the bus and instructed passengers to jump. Soon after, the bus caught fire. By the time the shooting, explosions and fire were quelled, 37 Israelis and one American were killed, including 13 children, and 71 were wounded in the deadliest terrorist attack in Israeli history. Controversially, the fact that regular police untrained in hostage situations were the only security forces to respond is often blamed for the record-high death toll.

As Professor Jacobson pointed out in 2011, Al-Jazeera has glorified Mughrabi numerous times.

The PA has named numerous “buildings and streets in the West Bank” after her, but faced pressure in 2010 when it tried to name a public square after her on the anniversary of the massacre.

The ceremony took place a year later and people hung a plaque with a picture of Mughrabi. From Haaretz:

“We stand here in praise of our martyrs and in loyalty to all of the martyrs of the national movement,” Fatah member Sabri Seidam said at the unveiling of a plaque showing Mughrabi cradling a rifle against a backdrop map of Israel, the West Bank and Gaza Strip. The square was festooned with Palestinian flags.

Around a dozen people — none of them Palestinian government officials — attended the ceremony.

They’re ‘lashing out’ and telling them to keep their dumb mouths shut and stop contradicting the lies they’re telling on their behalf.

St. Breivik, pray for them.

“Norway stepped in as well, demanding the PA refund money the country donated for the center”

Yeah, the Palis will get right on it. Chop, chop.

This is akin to the ACLU when, once every few years, they fight for the right for a handful of Nazis to protest – but then spend the rest of their energy working to oppress free speech for the rest of us.

No, the ACLU has changed radically in the last 15-20 years. The ACLU that defended the Nazis in Skokie was a genuine and extremely valuable civil liberties organization. Some chapters like that still exist within the organization, but most chapters would never do that today.

The ACLU was originally founded as a Communist Party front, and for its first decade or two it acted accordingly, but in a reverse of Conquest’s Second Law it was taken over by genuine civil libertarians who purged the communists and turned it into a respectable bulwark against censorship for about half a century. True, it was always selective about which liberties it defended and which it ignored, but the ones it cared about it defended honestly and zealously no matter who the “client” was or how distasteful their cause. Overall it did a lot more good than harm. FIRE today is very much in the spirit of the ACLU of about 1950-2000. But some time during the anti-W-Bush hysteria the ACLU lost its mind and got swept into the new leftist mainstream. I’m afraid there’s not much hope for it any more.

terrorists who had brought sub-machine guns, grenades and explosives

Which they’d carried with them while making their way to shore after their boat capsized?

They were in two Zodiac boats, one of which capsized.

This is the frog and the scorpion story. Why do liberals always fall for it?