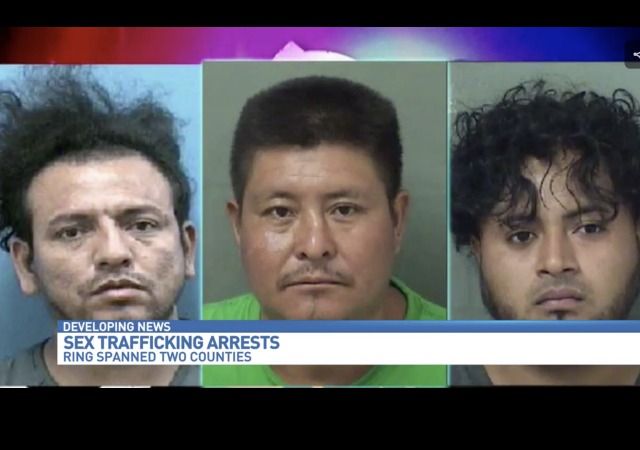 Investigators in Florida have torn apart a sex trafficking ring in Florida that took place across two counties, which forced women to have sex with at least 100 men a week.

Authorities arrested three men who face accusations “of forcing women to have sex with dozens of men a day.” CBS12 discovered “at least six women from different counties were sex trafficked out of several brothels” that existed in Martin and Palm Beach Counties and Lake Worth.

The seven-month investigation started after a victim, who ended up pregnant, told detectives accused sex trafficker Miguel Maradiaga forced her to have sex with about 120 men a week inside a trailer.

She said they would then transport her to the other locations.

CBS12 reported that the youngest victim is in her 20s and came from Puerto Rico. The men also used women from Costa Rica, Colombia, and the Dominican Republic.

One woman told investigators that women would be flown into Fort Lauderdale from Puerto Rico and picked up at a train station in Lake Worth, under the Interstate 95 overpass. The report does not specify the ages of the women, or say whether any were juveniles.

One woman said she was forced to work at brothels ran by Maradiaga and his family until she became pregnant. Maradiaga refused to allow the woman to receive medical care and forced her to work as a “house mom,” collecting money and forcing other women to keep working.

Another woman told investigators the houses typically had one or two women available at a time, with men paying for 15-minute sessions.

Maradiaga took over “the family business” four years ago after authorities deported his brother “to their native Honduras on prostitution-related charges.”

The authorities also arrested Byron Estrada, who ran one of the brothels and worked as a security man, and Joel Gomez-Chilel, another security man and he collected money from the men who had sex with the women.

Officials claim that Maradiaga disguised his business on business cars that advertised “clothing for men of all sizes.” He would hand out these cards to males in Hispanic communities. But these cards had addresses for a brothel printed on the back.

Authorities in Palm Beach County have arrested and charged 10 people with human trafficking. Palm Beach County State Attorney Dave Aronberg has credited “a 10-member task force formed in January for the growing number of arrests for an offense some have called modern-day slavery.” The Palm Beach Post reported:

The task force, based in Palm Beach Gardens, is made of up of the Palm Beach County Sheriff’s Office, the State Attorney’s Office and the FBI. It includes a full-time prosecutor from the State Attorney’s Office, an FBI agent, an FBI analyst, along with a sergeant, lieutenant and four detectives from the sheriff’s office. The unit also includes a PBSO missing-persons coordinator for juvenile runaways.

It is paid for in part by $1.5 million in grant money the sheriff’s office is sharing with Catholic Charities over the next three years to combat human trafficking, defined as the use of force, fraud or coercion to control another for the purpose of engaging in commercial sex acts, labor or other services against their will. Florida had the third highest number of calls to the national trafficking hotline in 2016.

“If you look at the number of cases we had, it was minimal,” Aronberg said last week in Tampa during a meeting of the Statewide Council on Human Trafficking. “That’s because there’s a steep learning curve for law-enforcement to charge these cases properly, also to investigate and identify the victims of human trafficking.”

Not important, because the women are not college students who got drunk and woke up to someone they didn’t know.