“Not at this time” 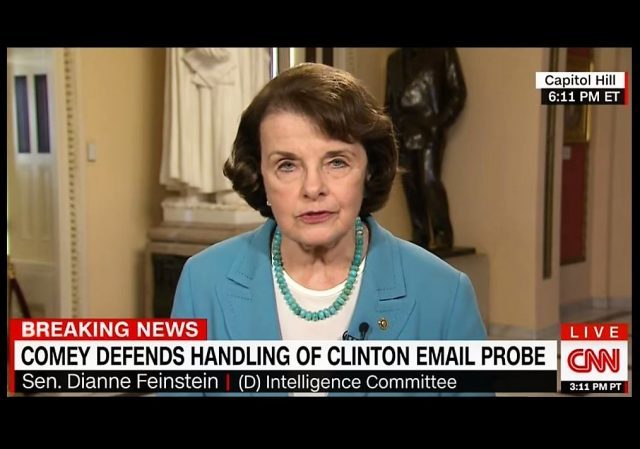 Unless there are more facts that come out, the charges that the Trump campaign colluded with the Russians during the campaign should go down as one of the most preposterous and dangerous conspiracy theories in recent political history.

It is a theory pushed relentlessly in the media and by Democrats to try to undermine our political institutions, including the Electoral College. It is the foam coming out of the mouths of Democrats and #NeverTrump Republicans. It is spread with reckless abandon by Twitter and social media personalities you never heard of until they started shouting that Trump and his cohorts had committed treason; now they have hundreds of thousands of followers who retweet by the thousands every innuendo.

I wrote about this back in February, The fact-free Intelligence Community-Media trial of Trump by innuendo. Yet what evidence is there even now to support the conspiracy theory? As of this moment, apparently none.

California Senator Dianne Feinstein, certainly not sympathetic to the Trump administration, was just briefed along with other Senators on the Intelligence Committee at CIA headquarters and appeared on CNN.

Wolf Blitzer asked her straight out: “Do you have evidence that there was in fact collusion between Trump associates and Russia during the campaign?”

Her response: “Not at this time.”

To which Blitzer responded (comment partially cut off in short clip below): “That’s a pretty precise answer, I know the investigation is continuing.”

The full interview is here.

This continues a long line of informed people denying evidence of collusion, such as Former DNI Head Clapper: No Evidence of Ties Between Russia, Trump:

We did not include any evidence in our report, and I say, “our,” that’s N.S.A., F.B.I. and C.I.A., with my office, the Director of National Intelligence, that had anything, that had any reflection of collusion between members of the Trump campaign and the Russians. There was no evidence of that included in our report.

And in March, Sen. Chris Coons walkback his suggestion of incriminating transcripts: “I have no hard evidence of collusion” between Trump world and Russians.

Keith Koffler summed it up:

Okay, how many months into this are we? How much screaming, shouting, handwringing, dyspepsia, and psychiatric care have people had and done over this issue? How many pundits have lectured us over the gravity of this situation?

And still nothing. Nada. Zippo.

Democrats, you lost the election. Go figure out a new plan and stop trying to pretend that the Cossacks swept in and stole this from you.

Unless and until actual evidence surfaces of illegal conduct involving the Trump campaign that affected the election, the people shouting treason should shout it into the mirror.

For all of Trump’s flaws, being a Russian stooge was never one of them. This entire line of inquiry is evidence of a stunning lack of judgement by the press and Democratic thought leaders (apologies for the redundancy). It is human to be wrong, but to put all of your credibility into a theory that lacked credible evidence is in itself evidence of poor thinking. You should not feel tempted to trust the words of those who think that poorly, and that is your mainstream media and your Democrat Party.

For many of us, the MSM’s Russian fable was not required to arrive at that conclusion.

It’s just like the lie about Libyian video critics attacking our consulate in Bengali. This lie was invented by Hillary to distract from her election lose.

Unless and until actual evidence surfaces of illegal conduct involving the Trump campaign that affected the election, the people shouting treason should shout it into the mirror.

I’m sure they do. Most of them are narcissists, and like looking at themselves in the mirror. The ones that aren’t narcissists realize they need to work on their delivery, if they want to be a social media star.

This whole Russia/Trump BS is being run for two reasons. The first was to provide cover for the defeat of HRC, which almost none of the MSM, the Dems, or Liberal and Dem operatives saw coming. It is still being touted as a major reason for that loss. The second, now the first, is to use it as a vehicle to harm Trump. Even if there is no evidence that this is true, it is being used to suggestively discredit his administration. If the anti-Trumpers get their way and hold some bogus public investigation, that will be used to further suggest that there is smoke [even though none even exists] and, therefor, fire.

There was far more evidence that Obama was not eligible for the office of President, based upon his reported parentage and lack of official records of birth within the US, than exists that Trump, or any of his campaign, actually colluded with the Russians to influence the election.

Tom Servo in reply to notamemberofanyorganizedpolicital. | May 4, 2017 at 2:06 pm

It’s becoming more and more clear that all they ever had was that ridiculous opposition memo that Buzzfeed published, which was full of allegations which were demolished as soon as they were made public. Poor Carter Page may have been a bit of a dimbulb, but to this day no one has come up with an allegation of any actual “crime” that he is supposed to have a commitment. (he never had access to classified info, he was not a government employee at the time of the alleged contacts) Now it does look like Mike Flynn did some stupid stuff, but he was fired as soon as that started coming out. And even with him, the mistakes he made aren’t directly linked to the election. (he talked to the Russian ambassador AFTER the election was over)

The media went all-in on this story, and they have not been able to accept that the whole thing has fallen apart. Comey’s testimony yesterday was the final nail in that stories coffin, as if one were needed.

btw, NOW we know why Jill Stein based her entire doomed recount effort on claims that Russia had hacked the election – because that was the line that Democrat strategists were starting to push, even in those early days.

notamemberofanyorganizedpolicital in reply to Tom Servo. | May 5, 2017 at 1:04 pm

How much money you think the Hillary Clinton Democrats paid Jill Stein to demand that worthless recount?

Imo it was millions…….just my opinion……

It was a baby hunt carried out by desperate and extreme special, peculiar, and individual interests. It was poorly Planned and the baby survived.

Meanwhile MSNBC has spent 52% of their time on a story that doesn’t exist. Colbert, can say anything and there as long as it’s anti Trump and everything is fine and Jimmy Kimmel blames Trump for his son’s heart problem.

So once again, there is no evidence that an investigation is needed so “the investigation goes on” until either they find (manufacture) evidence or Trump confesses.

It’s all about keeping the narrative alive. The MSM has had nothing to obsess over since people got bored with OJ, Jon Benet Ramsay and Malaysian Airline flight 370.

They will torture the data until it confesses.

According to Schiff, since they haven’t been able to find anything, that’s all the more reason to have an Independent Counsel.

(“independent”, as in Democrat)

What would be the reason for Sessions, Flynn, and others to ‘forget’ that they had contacts with Russian operatives during the campaign.
Seems it was serious enough for Sessions to have to recuse himself from the Russian investigation.
Shall we all pretend that none of these ‘hidden’ contacts were relevant?

I call BS on all the anonymous intelligence sources used by the NYTimes and WaPo. They are totally a POS.

It’s more than the F that keeps her from being an Einstein.

Disinformation is the mothers milk of Communism, Alinskyism, Progressivism and our present day amalgamation of these ‘isms, the Democratic Party and their verbal and visual partners, the media Mafia.
Even though the initial damning premise of one of their charges is totally debunked, the damage done by the severity of the charge is imbedded in the minds of their true believers and in a significant number of people exposed to the “Big Lie”!
It works, and is working against Trump.

Seems to me I heard Ms. Yates report that it was the FBI that was investigating the Russian connection.
Seems to me that Clapper acknowledged that he had not seen all the components of the investigations.