Prof Jonathan Turley: “I don’t think this makes out an obstruction case”

Prof Jonathan Turley: “I don’t think this makes out an obstruction case”

Turley on his opinion that there’s no case for obstruction: “this isn’t going to be real popular” 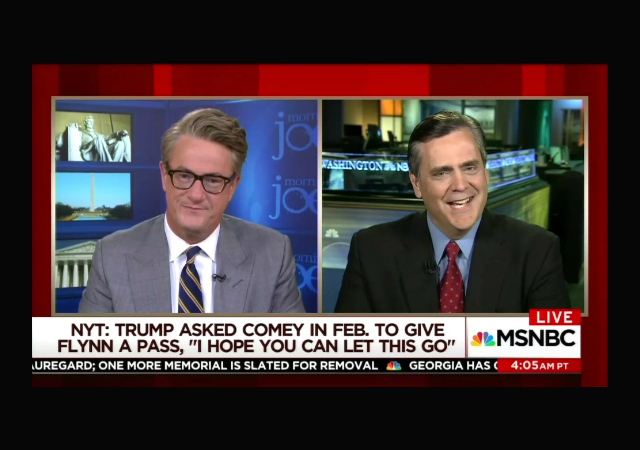 Joe Scarborough likes to make himself out to be a simple country lawyer. But on today’s Morning Joe, he ran afoul of a cardinal lawyering rule: never ask a witness a question to which you don’t know the answer.

Scarborough laid out a lengthy timeline for the purpose of teeing up law professor Jonathan Turley to agree with Joe’s conclusion that there was a prosecutable, federal case of obstruction of justice against President Trump.

But Turley hit Joe between the eyes with his response:

Turley went on to lay out his reasons:

Note: Turley offered a more comprehensive version of his argument against impeachment or obstruction of justice in an opinion piece appearing in The Hill today entitled “The Comey memo offers zero evidence to impeach Trump.”

And the reply is. But, but, but NotMyPresident!!!!!

So long as you live in this country he is your president. Just like Obama was mine. We may not like it but it’s a fact.

Yeah I try patiently to explain that to snowflakes but it’s a really painful process that leaves me wondering if most of them aren’t on a public computer in a mental hospital.

So long as you live in this country he is your president. Just like Obama was mine. We may not like it but it’s a fact.

Why the down votes for Milhouse’s comment? He’s absolutely correct. The president is also known as the “chief executive,” he is head of the executive branch of a republic comprised of nominally sovereign States. He is elected, not by the popular vote, but in a State-by-State contest decided in the Electoral College. He is not “our” president, he is the president of a confederation of States. It was the founders intent to isolate the president (to some degree) from the notion that he is the president of the people. The people’s representatives in the federal government are in the House (and, unfortunately, in a distortion of the Founder’s plan, in the Senate).

Video is too short!

Also, it would have been gold had he started his reply with “then there are a lot of lawyers who should stop practising law” 🙂

Joe needs to stop getting his talking points from his fiancee. I thought he was smarter than her. I was wrong.

He can’t. She’s under the desk.

Does anyone know what happen to Larry and that blog?

Turley’s article has some weird features.

… that does not change the fact that the question by Trump was wildly inappropriate.

He seems to be assuming that there is indeed a “fact” there. Though all I’ve seen so far is some sloppy “reporting”, based on (most likely) imaginary sources, from the NYT—nothing resembling a fact yet.

“Certainly true”? The Democrats (back when they were called the Republicans) tried to assert that when they impeached Justice Samuel Chase in 1804. The impeachment failed, and the theory that impeachment should be used to remove anyone for convenience, rather than actual crimes, went into eclipse. It looks like Turley thinks it’s been brought back to life.

And here I though “high crimes and misdemeanors” would require the cognizable elements of some sort of crime.

Nope. If the Framers wanted Presidents to be subject to impeachment only for having committed crimes, they were probably educated enough to say exactly that. My understanding is that the phrase “high crimes and misdemeanors” does not refer only to crimes, but to malfeasance in office, also misfeasance and nonfeasance, which is not a violation of criminal statute. An old example is: Suppose on December 8, 1941, FDR went on a multiyear sailing expedition, out of communication, in the South Atlantic. Not a crime, but surely an abandonment of his duties under the circumstances for which impeachment, conviction, and removal would be entirely appropriate. On the other end, being called into traffic court, found guilty and fined because of driving on an expired license would be a literal misdemeanor–surely impeachment is not appropriate for that. I think the phrase probably should be interpreted “…..Constitutional high crimes and misdemeanors…” i.e., serious stuff, but not just violations of criminal statutes.

In the parlance of the day, “high crimes” were crimes committed by high-ranking officials. “Misdemeanors” meant simply “misbehavior”, not lesser crimes.

I agree. And will add I find the memo suspicious. The dinner occurred on Feb. 14. Flynn resigned on Feb. 13 for misleading Pence. Trump already knew about the Russian conversation, but minimized it. The FBI had given Flynn a security clearance in Dec. that was still good. The investigation into the telephone conversation ended on Jan. 27 (WP). No crime found. Why a conversation about an investigation?

It is remotely conceivable that the conversation could have taken place, if Trump forgot or was unaware that the investigation had closed more than a fortnight earlier. But even if so there could be no obstruction, since there was nothing to obstruct.

Query: When a lawyer is talking to the local district attorney about his client and says, “you know, Bill, it’s my sincere hope that you dismiss the charges against my client.”

Is the lawyer guilty of “obstructing justice”?

Is the mayor guilty of obstruction if he asks his chief of police to consider backing off a crony in town hall?

And, if not legally, politically.

As my analogy shows, as well as yours, there is sufficient vagueness in the directive given to the law enforcement officer. It is not “obstruction of justice.”

Look, RP, even if you assume the memo is 100% accurate, expressing a hope or desire for an investigation to end is not the same as an “order to wrap it up.” Don’t you agree? (Don’t let your Trump hate get in the way.)

That speaks direectly to your second point. And my “hatred of T-rump” is no part of my analysis.

As to your first point, no; your analogy is completely wrong. Both men in your scenario are acting in complete concert with their roles.

Only if lawyer and defendant are Republicans.

If you heard a faint hissing sound in the video above, that was the Scarborough’s balloon (and probably his prostate) deflating.

I think what Obama said to the Russian President was a lot worse than Trump’s alleged comment. There is still no there there.

comey opened the door wide open to nihilism. In the end do we ask “what was Trump’s intent”? I wouldn’t wipe my a$$ with a comey memo. Everything he says and does is in doubt; nothing he says is relevant. I bet his daughter wrote it. Worthless trash political hack pretending to be an officer of the law.