What the numbers say 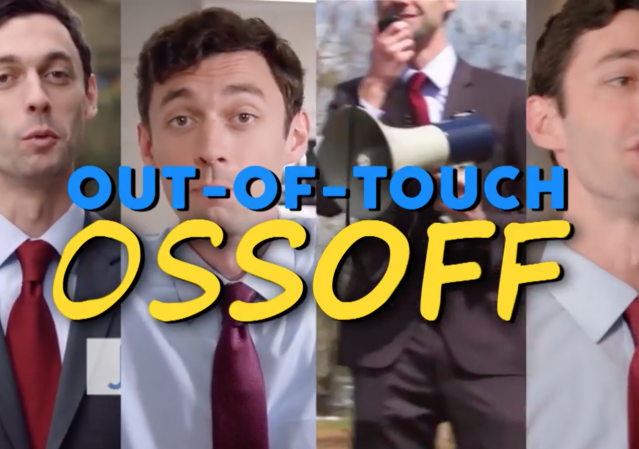 Conducted by Survey USA, the poll surveyed 700 voters, 549 of which were presumed to have voted in the runoff election. Margin of error is set at 4.3 points. Where the other 150 voters went, I’m not sure, because the poll is based on 549, 30 of whom indicated they were undecided, leaving 519 surveyed voters who’d made up their minds. Of the remaining 519, 40 more people have already pledged their support for Ossoff than Handel. 239 said they’ll vote for Handel and 279 plan to vote for Ossoff. 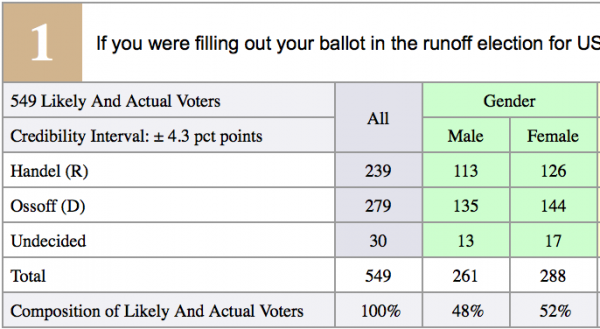 I’ve been covering elections for six years now and I’ll just say this: I always take Survey USA polls with a grain of salt. And I’m not the only one.

Handel’s campaign provided the following statement, questioning the Survey USA results, and hammering Ossoff for being flush with out-of-state cash:

“I don’t think anyone really believes that this is a 7 point race and our internal numbers show that this is truly a toss-up. Karen Handel has faced an unprecedented flood of out-of-state money, raised from Nancy Pelosi and the “resistance”, to fund ads falsely attacking Karen Handel and presenting Jon Ossoff as someone in touch with the voters of the 6th district. Most of his claims have been proven false by independent news organizations, and we’re confident that on June 20th, voters will see through this duplicity and elect Karen Handel.”

Handel’s campaign is probably right here — this race is still in a dead heat, but there’s certainly no seven point difference, not in the real world anyway. The Survey USA poll is narrative building, fundraising fodder, and little else.

Every poll, but the one that counted, the Election Results had Hillary winning.

Media outlets are big losers in the 2016 Elections. The nonstop nattering about Russia just re-enforces my decision to turn them off.

The original election results were not homogeneous, there were very distinct differences in the results from county to county and town to town.

Did they account for this lack of homogeneity when they selected their sample? Oh of course they didn’t, outfits like Survey USA are run by people who don’t even understand the basic mathematical principles behind truly representative polling. And how if you don’t work hard to obtain a truly representative sample, then your “poll” is garbage and means nothing.

They just want a storyline, they got the one they wanted, and maths are too hard to worry about the details.

I’m sure the Russians will find some way to steal this one from the Democrats as well.

I do not believe this sort of poll creates a desire for the Dem voters to offer more money to Ossoff. To me, it says that he is way ahead and has a lock on the election so don’t worry about the money. Of course, that’s just me and I suspect there many of the Dems who are not like me. I predict Handel by 4%.

Survey USA is one of 19 pollsters (out of a couple hundred) rated an “A” by fivethurtyeight based on more than 700 polls. They cal the race right90% of the time and have only a 0.1% bias. And, to the commment about Hillary above, I am certain Ossoff would be glad to equal Hillary’s numbers. There is no electoral college in a House race.

I do not believe that a person who is supported by out of state money, who does not even live in the district he is running for, stands much of a chance in a local election.
But, we had Obama for 8 years, so I may be mistaken about the intelligence of the voters.