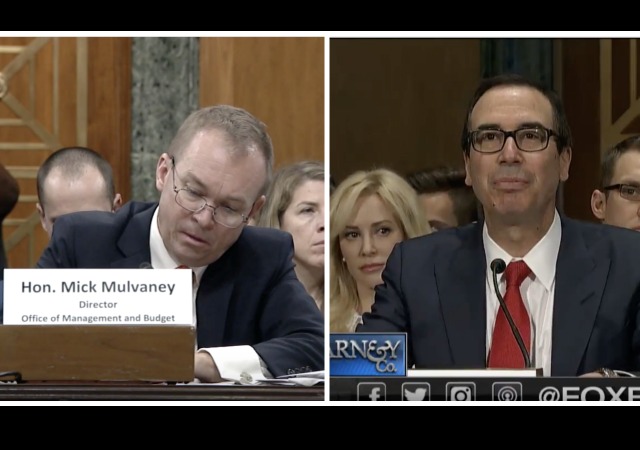 I think it’s safe to assume that a tax reform plan will take a lot longer than Trump’s administration thinks, especially when his officials cannot agree on how the plan will work.

Let’s start with Mulvaney. Trump promised, “his plan would be a major tax cut.” Vice President Mike Pence even tweeted out that the president “will sign into law the most consequential tax cut in American history. From The Washington Examiner:

Under questioning Thursday from Sen. Sheldon Whitehouse, D-R.I., though, Mulvaney said instead that revenue would not be counted on to make the tax reform add up — a major change from previous administration statements about the tax plan.

“I’m aware of the accusations of double-counting, I do not believe we engaged in that,” Mulvaney said.

Whitehouse then said that, for Mulvaney’s statement to be true, the envisioned tax reform would have to maintain constant tax revenue, even without considering any new revenue from faster economic growth.

“We are agreeing on that point,” Mulvaney said. The administration assumed that the tax reform would be revenue-neutral, he said, simply because Trump officials had to choose an assumption for the purposes of putting together the budget and there are not enough details about the tax legislation to specify details.

So in other words, the plan cancels itself out:

Mulvaney’s statement Thursday, however, is that the Trump tax plan would lose zero in revenue. In effect, it wouldn’t be a tax cut at all. For every dollar lost through tax rate reductions, another dollar would have to be raised through eliminating deductions, credits and other breaks.

Will tax reform be paid for by "growth" or not? Will Mulvaney & Mnuchin, Trump's budget & treasury heads, please get their stories straight? https://t.co/AbefXVeEjW

At two hearings today, Mulvaney said yes and Mnuchin no.

However, he said “that it was too soon to know the details of any tax plan.” But he insisted that the plan “would be paid for with economic growth and base broadening” and promised “full transparency” once the administration knows the details.

In April, Mnuchin unveiled a one-page plan to tackle tax reform, which will provide economic growth. From CBS News:

While the details into just how the American taxpayer is expected to pay the estimated $7 trillion cost have yet to be ironed out, Mnuchin, speaking to “CBS This Morning,” says the cuts are going to be paid for by “economic growth and a reduction of many deductions in special interest.”

“We feel confident that we can get to at least 3 percent economic growth on a sustained basis,” said Mnuchin.

This growth will not happen overnight. From CNBC:

“In our projections it will probably take two years to get up to three percent growth and then we can have a sustained level. That’s what we’re projecting,” Mnuchin said. “Obviously the sooner we can pass taxes, the sooner we can get regulatory relief the better we’re going to be.”

“I think we can create what’s incredible economic growth in this country,” he said. The Treasury Secretary was speaking on stage in an interview with Maria Bartiromo of Fox Business News at the Milken Institute Global Conference in Los Angeles, California.

Yeah, this is another uphill battle.
Getting a dollar loose from the government is harder than trying to manage your own health insurance.
The entire Government runs on ” Other People’s Money ”
Ya just can’t get the hooks out.
Maybe Trump could recite the Kennedy speech, verbatim.

For all the good it would do.

If I had to rely on current income levels in planning for my business, I’d still be working my tail off with the most basic equipment and making nothing.

My strategy has been re-invest everything I can.
And it is based on nothing but my blue-sky projections,
and a bunch of hard work.
Now, my machine technology is only three years old.

Anyhow, I am wondering why it is that the only time I have ever heard them bring up restraining themselves to only observed current levels is in this tax plan.

When I read the subheading for this post I immediately thought of the opening lines from the Malcolm in the Middle theme song.

The term “voodoo economics” has come to have real meaning.

There’s no conflict or contradiction. One is talking tactics, one is talking strategy. Different concepts, and different estimates.

All “tax reform” is just a rearrangement of revenue streams. The government still needs money, no matter what. That’s the tactical part—exactly where and when the government sucks money out of the functional economy, and how to do it in a way which minimizes damage to commerce and industry.

What happens when the economic damage caused by parasitic taxation is minimized (the damage is minimized, not the total tax revenue) is the strategic question. We normally expect the economy to “improve” in some tangible manner. And generally, this improvement would generate increased commercial activity, which would in turn increase the government’s tax revenue, without having to increase tax rates. Which is good, because increased tax rates would damage the functional economy, which would in turn dampen commercial activity, which would reduce tax revenue, and we’d have one of the many ways to spiral into a depression.

The math is solid enough … but math gives people headaches.

Here is the Kennedy tax speech, now many of you have heard it.
But, these days, many have not.
It is only about 2 minutes.
https://www.youtube.com/watch?v=I5PInhXkfvs