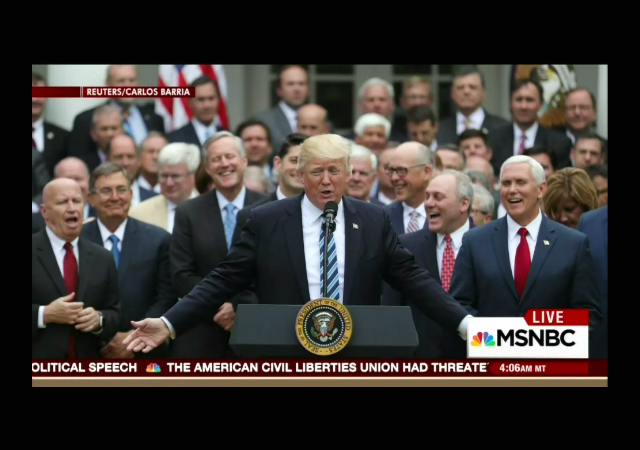 When did the word “optics” enter the political lexicon? In any case, the Morning Joe crew today ripped the look of the Republican Rose Garden ceremony of yesterday at which President Trump and House members celebrated the passage of their health care bill.

Donny Deutsch said they were “a bunch of fat, middle-aged, rich white guys.” When Willie Geist mentioned that Mika had said that the photo looked like a golf course ribbon cutting, Joe Scarborough interjected: “it’s a country club with restrictive membership. Obviously, you have to be white, and a male, to be there.”

An unkind cut by Scarborough. Let’s remember: no caucus gets to decide on the race of its members. With the exception of the Congressional Black Caucus, that is, which excludes white members.

So how long till his pending marriage to Mika blows up?

If we’re starting a pool, I don’t want anything later than six months after the “I do’s”

Has the Morning Joe crew paid any attention for the last 7 years to the republican party stance on Obamacare? Well it’s been repeal and replace. So only a fool would be surprised that they finally did what they said they would. The morning Joe crew knows that this bill will be changed by the Senate and it will go to reconciliation. So all the cat calls, gashing of teeth and screaming that people will die is Morning Joe supporting the democratic game plan.

Well, what I find ironic, is of course for all the caterwauling about white males, white males have brought us western civilization which has brought the end of slavery, the elevation of women, the inventions of effective indoor cooling and heating and plumbing, and of course, I could go on and on.

So anyone that complains about white men, is complaining about civilization itself, and about the progress of mankind.

“it’s a country club with restrictive membership. Obviously, you have to be white, and a male, to be there.”

That’s a good sign. It shows that somebody means business. If they want to just put on a show (that “optics” thing again), they’d leave out some of the movers & shakers and bring in a bunch of the usual whiners.

I find it amusing that Joe said this… “it’s a country club with restrictive membership. Obviously, you have to be white, and a male, to be there.”

He has this on his website – “Scarborough served as a member of Congress from 1994 to 2001. While in office, he was a member of the Judiciary, Armed Services, Government Reform and Oversight, and the Education Committee. He was also part of a small group of young Republican congressmen called the “New Federalists” who were said to possess a surprising amount of power given their youth and lack of years in Congress by the National Journal.”

Donny Deutsch said they were “a bunch of fat, middle-aged, rich white guys.”

This, from the future Mr. Mika Brzezinski.

I just hope the left keeps up the derision of old fat white men through the next couple of election cycles. That strategy worked so well last November for Hillary and the DNC. You never hear the GOP or right leaning journalists cast aspersions on young skinny black women or any group. If Fox News had said something similar about African American supporters of BHO the NYTs would be Outraged I tell you!

Same Rose Garden that Obama used to introduce Bowe Bergdahl’s parents and tell America Bergdahl “Served with distinction.”
Same Rose Garden Obama and Hillary appeared in a day after Benghazi hoping to “Gruber” America into believing the deaths of four Americans in Libya was all the result of a “Despicable internet video, rather than some failure of policy”
A place of small celebration rather than the former peddling of lies aint such a bad thing.

How did this blog become a regular forum for these two minor msnbc clowns?

It’s dignifying their nonsense way too much.

Joe and Donny are two rich, fat white guys. Funny how they don’t notice that.