McMaster described the discussion with the Russians as “wholly appropriate.” 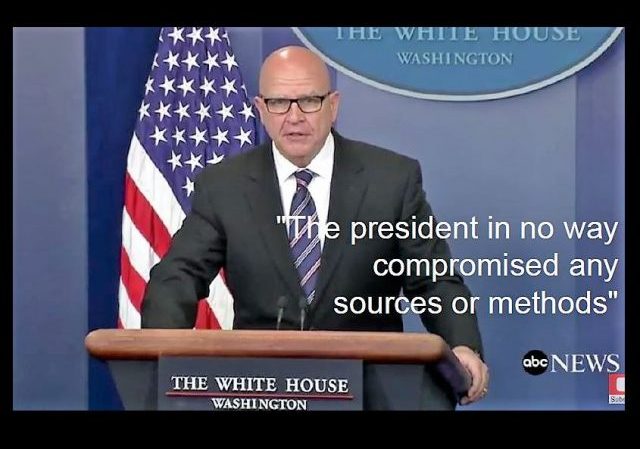 National Security Advisor H.R. McMaster denied the story through a written statement and in front of the press. Then today he went before the press again and told reporters that Trump did not compromise any sources or methods to the Russians. He described the discussion as “wholly appropriate.”

McMaster starts the conference by saying that Trump will speak to leaders of Muslim countries to confront radical Islam. He continues to describe his visit to Israel.

McMaster stands by his denial of the WaPo story and the premise of the article is false. Our national security is at risk when those violate confidentiality. Trump did not say anything inappropriate or violate our national security.

He again tells the press that the discussion was “wholly appropriate” and was standard info discussed with heads of states working together. He is also not concerned that others will start withholding information from us.

McMaster reminds the press that Tillerson and Powell were in the room as well and no one thought the information was inappropriate. He also said that it’s “wholly appropriate for the president to share whatever information necessary to advance the security” of our country.

The information he talked about was about operations already going on and known to the public.

The president in NO WAY compromised sources or methods during the conversation with the Russians.

“The information was so top secret …” that they couldn’t put it on Hillary Clinton’s home server.

“Always remember the basic rule that has been proven accurate 100% of the time:

When the CIA wants to leak a damaging story they coordinate with the Washington Post and ABC. (and vice-versa).

When the State Dept. or FBI/DOJ wants to leak a damaging story they coordinate with CNN and the New York Times. (and vice-versa).
This consistent pattern has NEVER been broken.”

From “It didn’t happen” to “It wasn’t inappropriate”.

What are you talking about “convincing” Is he suppose to say they discussed nothing? He EXPLAINED nothing inappropriate was discussed.

Do you read and understand English or are you so blinded by Trump hatred that you can’t anymore?

Blinded, you answered your own question,

That “It” is so vague, I’m surprised they didn’t mention the small children in the room at the time.

I’m going with McMaster on this, since he’s not worried about what was revealed then WaPo is crying over nothing. Every anonymous source has done nothing but try and throw Trump under the bus and ever time whatever has been published has not been true. WaPo needs some new sources.

there’s something vaguely orwellian about trumpcult.

There’s much that is positively disgusting about #NeverTrump cult.

It’s the difference between denying the WaPo version of the discussion – ‘it didn’t happen’.

2 different aspects of the same event.

TDS blinds you to so much that is obvious.

But, you stinking, lying, pathological Collectivist fraud, the Wapo story as reported was admitted to by your Great God Cheeto just today.

“It didn’t happen as reported” was a very chary apologetic which has NOW morphed to “It was appropriate”.

It’s all just bullshit. T-rump is a lose cannon.

IFFFF it was “appropriate”, whence cometh all the damage control all over the world? Which is going on apace as you lie. Or type. Which is the same thing.

On the other hand, one must admit that that particular poster is an expert on “lose (sic) cannon”s.

Really? I’m totally consistent. How is that being a “lose cannon”s [sic right back atcha]?

And are you really reduced to picking at typos…??? Because that’s just sad.

No he didn’t; discussing an abstract and revealing classified sources and methods aren’t the same to non-deranged and honest people.

the Wapo story as reported was admitted to by your Great God Cheeto just today.

When? The only relevant portion of the WaPo story, the only allegation it contained, was that he told the Russians the city where the information came from, from which they might possibly be able to identify the source itself. But neither the orange one nor McMaster nor anybody else in the room has admitted that this happened, an McMaster has explicitly said that not only didn’t it happen but it couldn’t have happened. So what admission are you referring to?

In Jewish law there’s a term of art: “He was sued for wheat but admitted to barley”, in other words confirming something that was not in the original charge does not constitute even a partial admission of the charge.

“I’ve always been a #NeverTrumper and I’ll always be one; any story that makes Trump look bad must be true.”

From “It didn’t happen” to “It wasn’t inappropriate”.

Sorry, Rags. They’re still saying it, i.e. the inappropriate thing that the WaPo accused Trump of, i.e. telling the Russians where this information came from, didn’t happen. Nobody ever denied that something happened, i.e. there was a meeting and Trump told the Russians some things he thought they needed to know; but that thing was completely appropriate and nobody seems to be saying it wasn’t.

Is Trump trolling for leakers by releasing select info and seeing where/how it emerges?

The press has not discovered a baby since day -100, but the baby hunt continues with dreams of abortion. It doesn’t seem like a viable enterprise, but the JournoLists seems to have formed an emotional attachment to their fictitious baby.

So unnamed “intelligence” officials were so outraged and concerned about Trump inadvertently exposing Top Secret information to the Russians and compromising our national security that they went straight to the WaPo to broadcast our secrets to the world? Yeah – that will protect us.

It’s as dumb as the Washington Post covered in doggie dew…..

A slowdown in advertising spending and a rise in cord-cutting by pay-TV customers are giving Wall Street fresh jitters about the health of the television industry.

During the first quarter of the year, an estimated 762,000 pay-TV customers unplugged their satellite or cable TV subscriptions — a dramatic acceleration of the cord-cutting trend.

At the same time, media companies began struggling to sell their commercial spots, particularly those on CABLE television channels. CBS Corp., Time Warner Inc., Viacom, AMC Networks and NBCUniversal all reported declines in advertising spending in the first quarter — a consistent refrain that alarmed analysts.
…
The weak advertising market comes at an inopportune time for the television industry…..

“….a dramatic acceleration of the cord-cutting….”

I’m just a simple person, and a #NeverTrumper at that, so maybe there’s something I don’t understand going on, but it seems to me that McMaster’s statements, both yesterday and today, are completely consistent with the president’s, and completely contradict the anti-Trump narrative on this.

Now unless my command of the English language is a lot weaker than I think it is, it seems to me that the name of the city where the information came from falls squarely into this category of “sources and methods”, which all involved say Trump didn’t and couldn’t have disclosed. And last I heard that is the only sensitive information he was accused of disclosing in the first place. If he didn’t and couldn’t have done so then it would seem to me that we’re done, and there’s no story.

Can someone point out a flaw in that reasoning? I’d love to see Trump impeached and Pence become president (watch the lefty heads explode then!), but I don’t see how this gets us even one inch closer to that goal.

Meanwhile McMaster refused to say that the Wall — or any part of Jerusalem — is in Israel. What happened to Trump’s firm promises?

“What happened to Trump’s firm promises?”

I don’t recall that he made a firm “promise”, but as I say – recall.

McMaster is not going to get out ahead of the president, it means nothing.

If you’re interested, The Times of Israel has this on the “Western Wall” story:
http://www.timesofisrael.com/us-consulates-political-counselor-named-as-official-who-told-israelis-western-wall-is-not-yours/

” The American official who sniped at his Israeli counterparts that the Western Wall, the holiest place for Jews to pray, is not part of Israel and not Israel’s responsibility was named Tuesday in a TV report as David Berns, the political counselor at the US Consulate in Jerusalem. A second US official, the consulate’s economic counselor Jonathan Shrier, was also involved in the bitter diplomatic incident, which deteriorated into an angry shouting match, Channel 2 said. “

Well don’t let the truth get in the way of a narrative created to feed a reality constructed to affirm a world view that only works in movies.

You knew this was coming after the media had been reduced to complaining about scoops of ice cream.

Brutalizing peoeple is just flat wrong. I doubt we are going to be meeting each other at the masonic lodge meet ups

Jew, Christian, I don’t care, just as long as they could send a line.

Where is the outrage that a private meeting between the President of the United States, the Secretary of State, the National Security Advisor and the Ambassador of Russia has been leaked? If a meeting like that is not secure then the President can not run the government. Leakers should be found, treason charges laid, and the hangman briefed. And as an interim measure anyone who had security clearance for the minutes or transcript of the meeting should be fired.