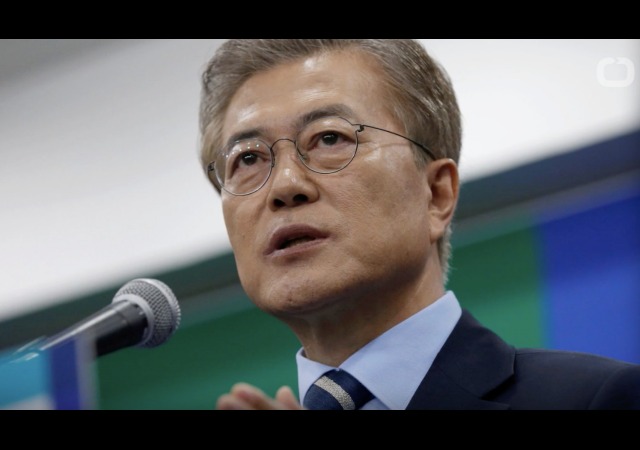 Back in March, South Korea’s Constitutional Court removed President Park Geun-hye due to numerous scandals that surrounded her. Authorities arrested her three weeks later and authorities claimed she “abused the mighty power and position as President to take bribes from companies and infringed upon the freedom of corporate management and leaked important confidential official information.”

Well, Park was friendly with the U.S. and agreed with our officials on North Korea. Her ouster led to an opportunity for more liberal officials to rise to power who want to take a softer approach on North Korea.

That’s exactly what happened. Democratic candidate Moon Jae-in won the election yesterday, which may “mean an overhaul for Seoul’s policy on North Korea. He even said that he would “visit rival North Korea under the right conditions.”

Here are the final results: 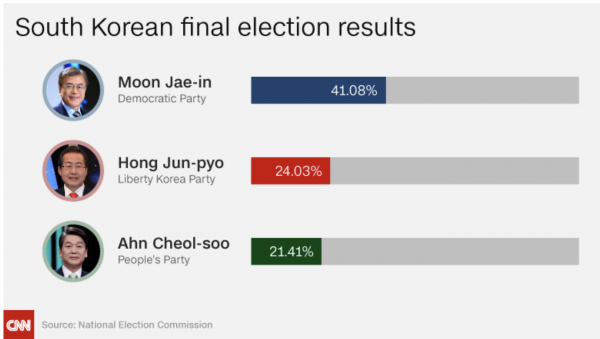 Moon lost to Park in the 2012 election, but his election to the presidency “will end almost a decade of conservative rule in South Korea.” From The Washington Post:

“From tomorrow onward, I will serve as your president,” Moon told cheering crowds of supporters in Gwanghwamun Plaza, the central Seoul square where hundreds of thousands of South Koreans held candlelight protests against President Park Geun-hye, leading up to her impeachment and triggering Tuesday’s election.

“I will become the president for everyone, even those who didn’t support me,” said Moon, who lost to Park in the 2012 presidential election.

But did people vote for Moon because they want a softer stance against North Korea or because of change? WaPo continued:

But many South Koreans were voting against conservatives rather than for Moon, said Kang Won-taek, a professor of political science at Seoul National University.

“What people who were protesting wanted was political change, and a natural consequence of that is a change in government,” Kang said.

Moon understands this by promising “to improve transparency in government appointments and strengthen regulations on the conglomerates that dominate corporate South Korea.” Gee, this sounds familiar!

This also sounds familiar. Moon also promised the South Koreans he will “put together a huge stimulus package, to create 810,000 public-sector positions and to reduce long working hours.”

How This Will Affect the U.S.

The U.S. has protected South Korea since the peninsulas agreed to a truce in the Korean War. Technically, they remain at war. North Korean dictator Kim Jong-un has raised tensions recently by threatening nuclear weapon developments and shooting missiles off into the sea with some reaching close to the coast of Japan.

But our Terminal High Altitude Area Defense system (THAAD) in South Korea has become a huge thorn in the side of North Korea and China. The U.S. and South Korea insist that the system is for protection against North Korea, but China has objected to it. Experts said that China has concerns the countries will use the system “to spy on China’s activities, rather than monitor incoming missiles from North Korea” and it could “undermine its ability to respond to an attack on its own soil.”

Beijing has grown tired of North Korea’s dictator Kim Jong-un, but the country still enjoys the communist kingdom since officials can use it “to keep U.S. power in the region from expanding to its doorstep.”

Moon has announced that he will “sincerely negotiate” with our officials and China over THAAD. He did not go into details, though. President Donald Trump called Moon after he was sworn in. From The New York Times:

Mr. Trump called Mr. Moon hours after he was formally sworn in on Wednesday. The two leaders agreed to maintain a strong alliance and cooperate in dealing with North Korea’s nuclear and missile threats, Mr. Moon’s office said. They also agreed to hold a summit meeting in Washington at the earliest opportunity, it said.

“The alliance with the United States is and will always be the foundation of our diplomacy and national security,” Mr. Moon was quoted as telling Mr. Trump. “The alliance is more important than ever, given the rising uncertainty surrounding the Korean Peninsula.”

Mr. Moon’s comments appeared aimed at easing fears that his new liberal government and its eagerness for diplomatic and economic engagement with North Korea may create a rift with Washington.

Despite Kim Jong-un showing his strength, Moon wants to soften the tone with the communist kingdom. From USA Today:

In a speech at the National Assembly, Moon pledged to work for peace on the Korean Peninsula amid growing worry over the North’s expanding nuclear weapons and missiles program.

“I will quickly move to solve the crisis in national security. I am willing to go anywhere for the peace of the Korean Peninsula — if needed, I will fly immediately to Washington. I will go to Beijing and I will go to Tokyo. If the conditions shape up, I will go to Pyongyang,” Moon said.

Even though Trump and Moon spoke, the South Korean president wants his country to take the lead in negotiations with North Korea. The NYT continued:

Compared with his two conservative predecessors, who had stressed a united front with Washington in punishing the North, Mr. Moon has often called for his country to take the lead in easing tensions on the divided peninsula through dialogue.

“I will do whatever it takes to help settle peace on the Korean Peninsula,” Mr. Moon said during a speech at the National Assembly, where he was formally sworn in on Wednesday. “If necessary, I will fly immediately to Washington.”

Good. Let’s get out now and leave the peninsula to those who live there.

Yes, of course! Let’s abandon one of the largest democratic and economic powerhouses in the region to a genocidal megalomaniac to the North, and an empire-building wannabe to the West. Makes perfect sense.

You can lead a horse to water, but you can’t make it drink. Eventually you figure out that if the horse really wants to drink, he’ll figure it out for himself and you can stop wasting your own time.

Did Mark mean to turn the Comments function off on his article below this one?

Also, does anyone know what has happened to Larry Johnson of
noquarterusa.net?

MadisonS in reply to notamemberofanyorganizedpolicital. | May 11, 2017 at 4:32 am

I used to go to LJ’s site on numerous occasions and miss it for his straight forward analysis. One day not too long ago it just wasn’t there. There as poster who used to post many links from WND and I tried to find her there to no avail. I I even went to archive.org to pull up the most recent cached pages to see if there was any farewell message and there was none. It appears he simply killed the website and removed it from the registry.

Thanks. All I could find were cached pages.

Maybe he was “activated” again by the new admin?

Who knew obama had a Korean twin? This is the perfect time to move all of the nasty warmongering American troops out and put them in Japan. Mr. “Can’t we all get along” Moon can then work the same magic that obama worked on all of our enemies! And we can bet Mr. Moon will get the exact same results. Kim will take all that his bros in the South will give him and then ask for more. And if they refuse he will then threaten them with nuclear annihilation!

Is this the equivalent of kicking the can of Chim-chi down the road? Kim Boy is getting his way through intimidation…. SK now hoping he will warm up to their softness. How far SK has slid down the slippery slope.

Moon is soft – as soft in the head as obama. Though – the difference is obama is a traitor, and couldn’t care less about his home country, where Moon is going to have to live (or die) in his.

This million artillery pieces aimed at South Korea will not be going away – nor will the NOK fat-boy.