Prosecutors accuse her of bribery and abuse of power. 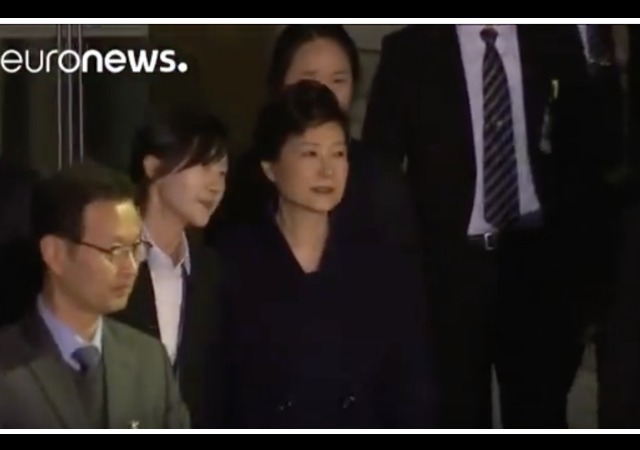 South Korean authorities have arrested former President Park Geun-hye only three weeks after a court removed her from office. Prosecutors have accused “her of bribery and abuse of power.”

“Major crimes have been ascertained and there is a concern that the suspect might attempt to destroy evidence,” Judge Kang Bu-young said in a text message to reporters.

“The court recognizes the need, necessity and reasonableness of the suspect’s arrest.”

Three weeks ago, the Constitutional Court removed Park after numerous scandals surrounded her. Legislators impeached Park back in December, with a vote of 234-56, including many from her own party.

The decision also means Park does not have immunity protection and can face “prosecutors seeking to charge her with bribery, extortion and abuse of power in connection with allegations of conspiring with a confidante, her childhood friend Choi Soon-sil, to collect tens of millions of dollars in bribes from big businesses like Samsung.”

A court determined Park remain held so authorities can question her and preserve evidence. They moved her to the Seoul Detention Center, but have not formerly indicted her yet:

“The suspect abused the mighty power and position as President to take bribes from companies and infringed upon the freedom of corporate management and leaked important confidential official information,” the statement from the Seoul Central District Prosecutor’s Office said.

Park faces 13 charges, “including bribery, abuse of power, coercion and leaking government secrets.” Authorities interrogated her for 14 hours last week and she denied any wrongdoing.

Prosecutors allege that Choi used her friendship with the president to extract $70 million in bribes from conglomerates as kickbacks for business favors, and that the former president colluded in the scheme.

Lee is accused of giving or promising to give Choi $37 million to ensure government support for the merger of two Samsung units — crucial for the Samsung scion to retain control of South Korea’s biggest conglomerate.

This is all very troubling for Samsung, which is South Korea’s “largest conglomerate” and once thought untouchable. The company may be a tech brand to America, but as CNN Money points out, it’s everywhere in South Korea:

South Koreans can be born in a Samsung-owned medical center, grow up learning to read and write with the help of Samsung tablets and go on to attend the Samsung-affiliated Sungkyunkwan University.

It doesn’t end there. They may then live in a Samsung-built apartment complex, fitted out with the company’s appliances and electronics. South Koreans can even end up at a Samsung funeral parlor when they die.

Its various affiliated companies account for more than 20% of the entire market value of the Korean Stock Exchange — most of that coming from the crown jewel, Samsung Electronics (SSNLF). The conglomerate’s businesses are estimated to account for around 15% of South Korea’s entire economy.

So, South Korea’s first woman President was corrupt and abused her power.

Thank you, founding fathers, for the electoral college!

Korea is showing us how to prosecute Obama and Clinton.