Why were journalists present at the supposedly spontaneous Palestinian stoning attack? 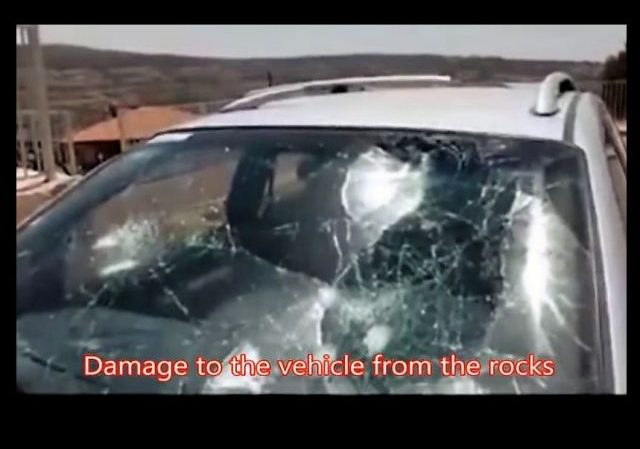 In 2013 an Israeli friend drove us through northern Samaria (the “West Bank”), including the settlement of Itamar, as I wrote in my post To Samaria and back:

Today we reunited with a family I was close to while a student in Moscow in 1980, and had not seen since 1984 in Moscow.  It was great, and very satisfying.  The parents, now in their early 80’s, have a life story about which history books should be written.  To see their son (my age) and his beautiful family in Israel was beyond anything I could have expected in those horrible days in which they were subjected to retribution and imprisonment.

Most of the day was spent touring the central “West Bank” area including Itamar, Barkan and Ariel in the Shomrom hills….

The longest part of the trip was the drive to Itamar, which is located on top of a high ridge overlooking Nablus in the distance with views towards the Jordan Valley….

Itamar has a long history of being attacked by Arabs from neighboring villages, the most infamous of which was the stabbing murder of the Fogel family, including a baby in its crib.

We didn’t encounter any problems at all, even driving through Arab villages.

One thing I didn’t mention in the post, because it didn’t seem relevant at the time, was that our Israeli friend carried a handgun, “just in case.” Just in case of what?

There’s an incident from 2000 that seems to live in every Israeli’s mind when driving through the West Bank. Two Israeli off-duty reservists, in one of the most gruesome incidents ever, were lynched when they made a wrong turn into the Palestinian controlled city of Ramallah:

The soldiers lost their way to their base on October 12, 2000, ending up in the Palestinian Authority (PA) controlled city of Ramallah by mistake. PA police forces took the two into custody.

Word reached local PA residents that undercover Israeli agents were being held in the building; some 1000 rioters reportedly gathered outside. The IDF declined to take action to rescue the soldiers; they were eventually stormed by the rioters.

One PA terrorist, Aziz Salha, got to the soldiers first, where he brutally murdered them – stabbing, beating, and dismembering them along with other rioters. He famously then stuck his bloodstained hands out of the window of the room where the two were held, eliciting cheers from the crowd.

The crowd then dragged the bodies to a central square, beating them further before setting up a victory celebration. PA police forces did not attempt to intervene and in some cases, participated in the barbarism.

During the recent so-called “Knife Intifada” (which includes car rammings and shootings), Israeli drivers have been targeted repeatedly. We have covered many of those attacks and murders.

It almost happened again, as an Israeli was surrounded by a mob of over 100 Palestinians who stoned and smashed the trapped vehicle. The Times of Israel reports that he fired shots, killing one attacker and wounding a “journalist”:

An Israeli man whose car was attacked by rioters shot dead a Palestinian man and injured an Associated Press photojournalist during a violent protest in the northern West Bank town of Hawara on Thursday, officials said. His car was pelted with stones and he said he believed he was going to be killed, and that he fired in self-defense.

As the Israeli civilian, a resident of a nearby settlement, drove through a demonstration in the Palestinian village outside Nablus, the protesters turned violent, kicking his car and pelting it with rocks.

The man tried to plow through the crowd, but his way was blocked by an ambulance, which had crossed into his lane. The ambulance appeared to be attempting to get around the protest, but the settler later claimed that the medics had deliberately tried to bar his passage.

During the attack on his vehicle, the Israeli man opened fire with his handgun, the army said.

The man’s shots hit two people, killing one of them and lightly injuring a second, according to eyewitnesses and Palestinian officials.

A military jeep pulled up seconds after the man’s car came under attack, and the soldiers inside it quickly dispersed the crowd with tear gas and other riot dispersal means….

Afterwards, the Israeli driver, a father of eight who lives in the settlement of Itamar, told Channel 2 news that the Palestinians “almost lynched” him. “Thank God I managed to get out of there… I looked death in the eyes,” he said.

The shooting death has been condemned, even though the video seems to show the car was under vicious attack and the driver rightly would have feared for his life.

As posed by actual Israeli journalist Seth Frantzman on Facebook:

On Thursday a Palestinian was shot and killed by an Israeli after stone throwers ambushed his car in a town near Nablus;
So why were at least four journalists, including a videographer, present to document the ostensibly spontaneous ambush, protest (see photos)? Photographers from AFP and AP were there.

The fact is the media were called BEFORE by people with prior knowledge that there would be this incident. The journalists were waiting for the “happening”; of course maybe they didn’t realize there would be a shooting, but their presence created an incentive for violence.

What people mean when they say “peaceful” demonstration in the West Bank is rock throwing and slingshots.

I’ve been at dozens, maybe 100 demonstrations, the second there is a presence of Israeli forces or settlers, there is stone throwing and violence.

They are only peaceful when there is no contact.

The fact that Israeli forces are “brutal” doesn’t mean that Palestinian demonstrations are peaceful. They are almost never peaceful. There are always “youth” who bring stones to throw.

Sometimes Molotov cocktails. Slingshots. This is a fact of life….

By the way 99.9% of stones thrown by Palestinians at cars do not result in a shooting death. Mostly the cars just drive away. This story in Hawara is a bit unique and that is because of the urban area and the media and the crowd.

Most stone throwing happens against cars where the driver can easily drive off.

How is it that multiple photo journalists were present at the supposedly random and spontaneous attack?

While that’s often a fair question, it isn’t in this case. There was a “demonstration” (which is usually a euphemism for a riot), so there were journalists covering it. There’s no reason to suppose they were expecting anything else to happen; the “demonstration” was newsworthy enough. Eventually soldiers would turn up and disperse the crowd and there’d be good pictures. Then the Jewish car drove by so the “demonstrators” stoned it, (because they’re literally Nazis and that’s what they always do when they see Jews) the driver defended himself, and the journalists were already there.

Here’s a followup to the story last week of Marwan Barghouti being caught secretly breaking the hunger strike. His cell’s cameras caught him hiding in the toilet stall, eating cookies and a Tortit™ bar, which both Google and Morfix rendered incorrectly as “tortilla”.

I was curious enough about this to try a Tortit. I can now report that it’s a lot sweeter than I expected, with a very strong almond flavor, reminding me more of amaretto than of marzipan or macaron.

How could anyone possibly object to a report on the Tortit™? There are some sick people frequenting this site, disgusting freaks who should drop dead.

You give the “journalist ” and Palestinians too much credit.

No, I’m not. Unless you’re claiming that a “mere” demonstration (and subsequent dispersal) is not newsworthy enough to justify these people’s presence, there’s simply no basis to speculate that they expected anything else to happen.

I don’t always agree with Milhouse, but have to give him and one of his supporters a “thumbs up.” He expressed exactly my own thought when I read the article. The question about the presence of reporters made it seem that the stone-throwing attack on the settler’s car was an incident isolated from any other type of event the journalists may have already been covering. The story makes it clear this was not so. As is pointed out, Pally demonstrations frequently turn riotous and violent, so notice of a demonstration is sufficient incentive for journalists to cover it because of the likelihood of having more to see than a simple “demonstration.”

No, he’s correct so far as the story reported here goes. A demonstration can be expected to attract photographers and journalists of one sort or another. In fact, a demonstration without news and/or publicity types makes little sense. A demonstration doesn’t actually do anything; it’s just for show, and the show has to be seen or documented to have any point.

That being so, the mere presence of journalists is not cause for suspicion that anything beyond the demonstration was ever intended.

“Journalists” are part of the left – meaning they side with any enemy of the U.S.

In other words, a staged press “event”. Any violence is an additional benefit to the cause of worldwide jihad. Remember that Abdullah Azzam, also known as “Father of Global Jihad”, was a Palestinian Sunni Islamic scholar and theologian and founding member of al-Qaeda” (Wikipedia).

The journalists I understand, however I would really like to know why an ambulance decided to pull across the median and stop right when the rioters started hitting the car.