90% of those taken into custody in had prior criminal convictions. 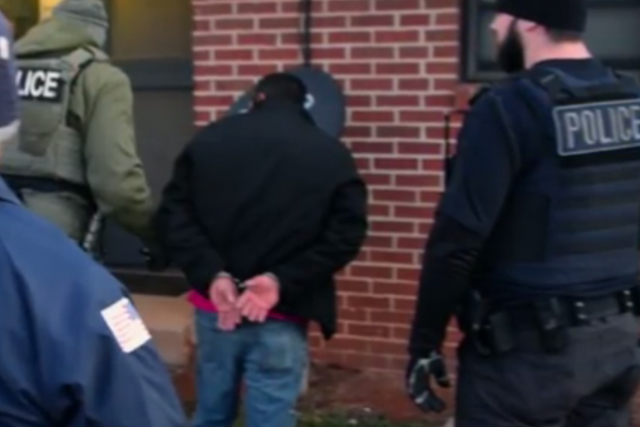 Last week, I reported that Immigration and Custom Enforcement officers had decapitated the brutal El Salvadoran gang MS13 in Southern California after they arrested more than 40 members using racketeering statutes.

This week, they followed it up with a series of raids that brought in 188 illegal immigrants, most of whom were connected with crime in this region.

Agents arrested 188 people in an operation targeting “at-large criminal aliens, illegal re-entrants and immigration fugitives,” according to a statement from U.S. Immigration and Customs Enforcement. Nearly 90% — 169 — of those arrested in the operation, which ended Wednesday, had prior convictions, officials said. Those arrested included nationals from 11 countries. The majority, 146 people, are from Mexico. Others are nationals of El Salvador, Armenia, Honduras, Thailand, Yugoslavia, Vietnam, Cambodia, Russia and the Philippines, according to ICE.

Among them was a 29-year-old Salvadoran national who was deported in 2013 after serving a nine-year prison term for rape and who returned to the United States illegally, ICE said in a statement. Also detained were a previously deported 51-year-old from Mexico convicted of cocaine trafficking, a 47-year-old from Mexico with prior convictions for felony assault and another conviction for battery, and a 26-year-old Salvadoran national who is a registered sex offender, according to ICE.

In fact, about 90% of those arrested during these raids had prior criminal convictions. The immigrants came from a number of different nations.

The vast majority of those arrested in the operation were from Mexico — 146 — but they also came from countries that included Russia, Armenia, Thailand, El Salvador, Vietnam, Cambodia and Guatemala, according to an ICE statement. Eleven women were among those arrested.

At least eight of the individuals arrested during the enforcement action now face federal prosecution for re-entry after deportation, a felony punishable by up to 20 years in prison. ICE officials highlighted the public safety approach when setting arrest priorities.

“Operations like this are emblematic of the vital work ICE Enforcement and Removal Operations officers do every day seeking to locate, arrest, and ultimately deport at-large convicted criminals and other immigration fugitives who pose a threat to public safety,” said David Marin, field office director for ERO in Los Angeles. “By taking these individuals off the streets and removing them from the country, we’re making our communities safer for everyone.”

Apprehensions at the Mexican border have plummeted by nearly 70% when compared with 2017 levels.

Amazing the difference when a traitor isn’t in the White House.

Gov. Brown will soon object to this targeting of democrat voters.

It is a pity that Moonbeam can’t be deported too.

Well, he wants to launch rockets out of CA, if he doesn’t tax them out of business. I understand there are about 67 moons around Jupiter….. he can take his choice of where to be deported.

I guess it is an improvement but the criminal arrest & deportation numbers need to be increased by multiple orders of magnitude and in their frequency.

Trump authorized an significant increase in ICE (10,000) and Border(5,000) agents as well as an increase in the number of immigration judges and detention facilities by the border.

In addition, there was a requirement for DHS to…

So, I suspect that activity will be ramping up real soon.

I don’t understand it, 188 in six Southern California counties except the one that is next to the border. ICE, I’m hoping that your sting in San Diego County is soooo big that you need to bring in ALL of your troops.

During the ’70s in NYC I remember standing in line at the Post Office passing time looking at the huge wall with the 100s and 100s of Wanted Posters. Why do we not have an ICE website with the 100s of 1000s of Wanted criminal illegal aliens listed with their photos and maybe associated rewards?

Bounties are legal and a licensed bounty program seems like a viable option for returning & unemployed US service personnel. Serious Action is needed to correct the problems created by the willful lack of enforcement & disregard for the immigration laws on the books over the decades.

Politicians shouldn’t bother discussing new immigration laws until the current laws are enforced(I was pissed off during the Ronald Reagan Amnesty fiasco and still furious over it). Don’t tell me about sweat shops & farms that can’t find enough illegal workers to exploit. Instead tell me that you are finally prosecuting the employers and NGOs that facilitate this human trafficking, drug running and visa scam programs.

While California’s Marxist dictatorship frantically works to circle the wagons around its sanctuary cities, Trump is steadily & methodically removing the need for them…

Well, we tried the self-deportin’ thing, an’ ya know… it just didn’t work out.
Nice start ICE!

’bout friggin time, somebody cracked down on these thugs….

The question now is what do we do with these POS. Doesn’t seem right to put them in prison and have the taxpayers on the hook for there up keep, and deporting them would solve anything because they won’t stay deported.
Maybe we could find another use for Gitmo, or find a island somewhere and turn them loose on themselves….only the strong survive