Firm said the raid is related to a Cuccinelli lawsuit 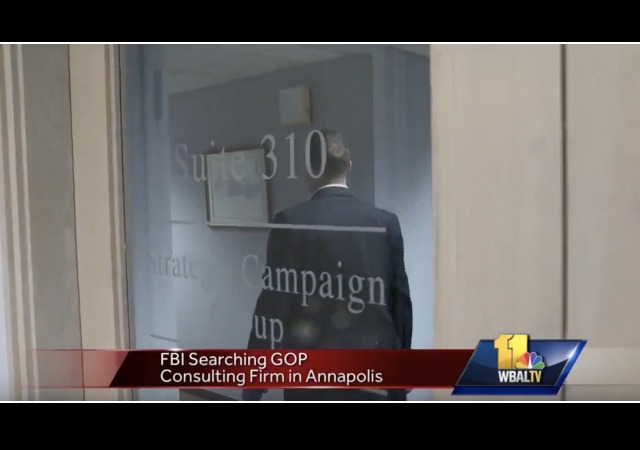 The FBI raided the Strategic Campaign Group (SCG) in Annapolis, MD Thursday, but refused to specify why it issued search warrants. Because SCG is connected to some of President  Trump’s advisors, there’s widespread speculation that the raid was related to the FBI’s investigation into Russian associates.

The Cuccinelli campaign filed a civil suit against SCG and the Conservative Strike Force Political Action Committee in 2014. The campaign stated that the two groups “raised about $2.2 million by assuring donors it would spend that money to help elect the GOP candidate,” but did not use the money properly on “an extensive media campaign on Cuccinelli’s campaign.”

Accusations against the firm included “false advertising, breach of contract and unauthorized use of his name and image.” The firm settled with Cuccinelli for $75,000. Others place the total at $85,000.

Rogers fought back against the lawsuit’s claims. The Capital Gazette continued:

He insisted Thursday that the Cuccinelli campaign’s claims have no merit. He said his firm raised about $300,000 for the PAC to spend on the governor’s race. Of that amount, $10,000 was donated to Cuccinelli’s campaign. He said the PAC, which he controlled, conducted an email campaign on behalf of Cuccinelli but was unable to raise enough money for direct mail or broadcast campaigns.

“I feel like we did everything in our power,” Rogers said. “Had he been a better candidate, I think we could have done better.”

SCG’s Prominence in the Republican World

The firm is highly regarded and frequently used by the RNC. WBAL described the impact SGC has on the GOP:

The firm is touted for pioneering the use of technology in political campaigns, and it represents GOP candidates nationwide. The firm’s website said one of its principles was formerly associated with a firm operated by Paul Manafort, who is the former Trump campaign manager whose business dealings with Russia are under intense scrutiny.

Strategic Campaign Group’s national clients include the Tea Party and the Conservative Majority Fund. The local client lists include Maryland state House Minority Leader Nic Kipke, and Delegate Pat McDonough used the firm while running for Congress. According to McDonough, the company did work for Gov. Larry Hogan and the GOP caucus.

Rogers also said the investigation was not looking into Maryland politicians. From The Baltimore Sun:

Rogers said the investigation did not involve Maryland politics and insisted his firm had done nothing wrong, but said he would release clients from their contracts if desired.

Maryland Republicans quickly distanced themselves from the firm.

Both Senate Minority Leader J.B. Jennings, of Baltimore County, and House Minority Leader Nic Kipke, of Anne Arundel County, said their committees will not use the firm again until its legal issues are resolved.

They confirmed that campaign committees for GOP senators and delegates had hired the firm to raise money and do other work before the 2017 session.

“I’m shocked by what has come to light today and we will not be working with them on any new projects until the legal process is completed and they are cleared,” Kipke said a few hours after the raid.

A PAC directly donating to a campaign??

I’m no lawyer, but that sounds like a blatant violation of campaign finance law.

Another laughable red flag was this: “The firm is highly regarded and frequently used by the RNC.”

It was used, alright. Used by Rance Prebius and the RNC to offer zero help with Cuccinelli’s campaign. It was diagraceful how the RNC left Cuccinelli in the political wilderness to fend for himself.

A PAC directly donating to a campaign??

I’m no lawyer, but that sounds like a blatant violation of campaign finance law.

What do you think PACs are for, if not to donate to candidates?

In federal elections they’re limited to $5000 per candidate per election, so they gave Cuccinelli the max that would be allowed — $5000 for the primary and $5000 for the general. Except that this wasn’t a federal election, so there was no limit on their contributions, and no legitimate reason to stick to $10K when by their own admission they’d raised $300K (never mind Cuccinelli’s claim that they’d raised $2.2M).

I for one think there should be a whole lot more investigations of these “consultants” – of course they don’t happen much because they are tied in to the people doing the investigating. Looks like in this case SCG was playing a version of the same game so popular among crooked charities – raise a bunch of money by saying it was all going to go to some needy cause, and then make a tiny token contribution to the “needy cause” while you spend all the money on champagne and caviar and trips to the Bahamas.

Is the firmed owned by “Never Trumpers?”

“Because SCG is connected to some of President Trump’s advisors, there’s widespread speculation that the raid was related to the FBI’s investigation into Russian associates.”

Seems a slender reed upon which to place the faith of the frantic.

Perhaps they found Russian salad dressing in the office breakroom fridge, too, an obvious sign of nefarious Putin influence.

notamemberofanyorganizedpolicital in reply to georgfelis. | May 12, 2017 at 3:27 pm

So was this like a bait and switch then? Donors gave money to the PAC expecting one thing, and it did something else?

Ken Cuccinelli is an unapologetic family values conservative type, and to some people that’s a great candidate, and to others it isn’t, so I’d take the consultant’s assessment with a huge grain of salt. When he ran for governor of VA, he lost to McCauliffe by only 2.5%, and part of that was that there was a libertarian spoiler in the race that got about 6.5% of the vote.