Did a Fear of a Hillary Presidency Cause Those in New York to Buy Guns?

Did a Fear of a Hillary Presidency Cause Those in New York to Buy Guns?

New York saw a YUGE spike in gun permits and sales in 2016. 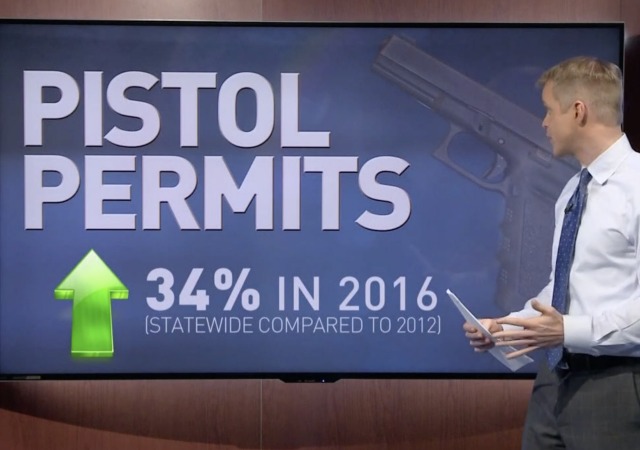 It appears so. WGRZ has reported that citizens in New York thought failed Democrat presidential candidate Hillary Clinton would win since so many sought out gun permits and purchased in 2016. The network reported:

Gun owners’ fear of a Hillary Clinton presidency may have helped spur a spike in pistol permits issued in the Empire State in 2016, increasing 34 percent from the 2012 presidential election year and rivaling numbers last seen when the SAFE Act passed four years ago.

A total of 29,910 handgun permits were issued outside New York City from January through October of last year, up from 27,547 in all of 2015 and 22,282 in 2012, according to State Police data obtained by the USA Today Network’s Albany Bureau through a Freedom of Information request.

That year, 33,030 pistol permits were approved outside the city — a 48 percent increase from 2012 — amid gun owners’ backlash to the SAFE Act, a state gun-control law that enraged Second Amendment groups across New York.

“I get my information from the gun-shop people, the people that are selling handguns, and they have said that up until six months ago, the number of pistols they were selling was still going up,” said Tom King, president of the state Rifle and Pistol Association. “But I don’t doubt that they may be dropping right now because of the election of President Trump.”

It’s not unusual for handgun permits to spike in presidential years, particularly when a candidate — in this case, Clinton — advocates for greater gun-control measures.

Gun-store owners say they noticed an increase in sales last year, though President Trump’s election has them bracing for slower sales.

“We saw that spike with the passing of the SAFE Act, and we see that spike every time there’s an act of terror,” said Jamie Arnold, owner of BoltWorks Tactical Firearms in Dryden, Tompkins County.

“Right now, there’s talk in the industry that this is going to be the slowest summer in six years, but thankfully we haven’t seen that so far.”

Now to get mandatory reciprocity for concealed carry, treating them like drivers licenses.