Schools will have more flexibility, which will hopefully lead to less wasting of food. 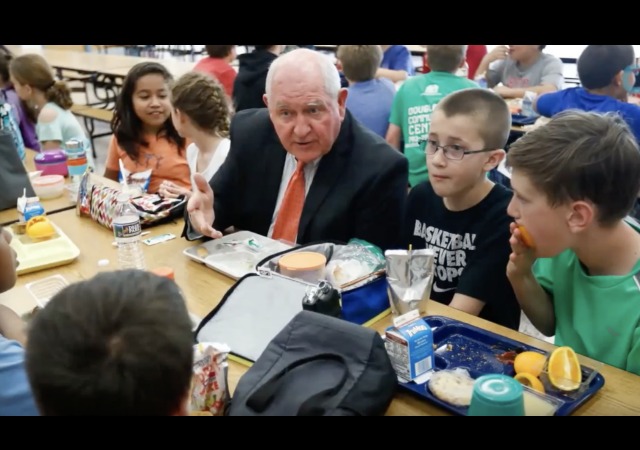 Secretary of Agriculture Sonny Perdue has announced his department wants to make a few changes to the school lunch programs that former First Lady Michelle Obama pushed through. The Wall Street Journal reported:

Schools, which receive federal funding for meal programs, won’t have to meet certain guidelines for whole grain, sodium and milk.

The U.S. Department of Agriculture said the decision comes after years of feedback from schools and food-service experts, who have faced challenges meeting meal regulations; and from students, some of whom have complained that the meals aren’t appetizing.

The department said the change “begins the process of restoring local control” over those food areas to give schools and states options in ensuring food choices are both healthy and appealing to students.

“If kids aren’t eating the food, and it’s ending up in the trash, they aren’t getting any nutrition—thus undermining the intent of the program,” Mr. Perdue said in a statement.

Perdue applauded Michelle “for addressing those obesity problems in the past” and insisted that the department will not reduce “the nutritional standards whatsoever.”

The Hill listed some of the rules Perdue wants to enact. It does exempt the schools in the 2017-2018 school year:

Sodium levels in school lunches now must average less than 1,230 milligrams in elementary schools; 1,360 mg in middle schools; and 1,420 mg in high school.

Further reductions were set to take effect by July 1, 2022.

“If kids aren’t eating the food, and it’s ending up in the trash, they aren’t getting any nutrition—thus undermining the intent of the program,” Mr. Perdue said in a statement.

I’m glad someone is finally listening. Among other things, mandating that fruit be taken by every child, whether they want it or not, only guarantees trash bins full of perfectly good fruit. Also, the caloric limits aimed at “fighting obesity” made the meals inadequate for scholastic athletes, who NEED a higher calorie intake.

But really, what strikes me about Mr. Perdue’s comment is its similarity to my thoughts on the $15 minimum wage: If employers are forced to pay more than they can afford, positions go unfilled, then potential workers aren’t being paid any wage — thus undermining the intent of the increased minimum wage.

Why is the government even REMOTELY involved in telling anyone what they should eat?

Why is the government paying for school lunches?

Why is the government handing out free money to nearly 60% of families to subsidize their food purchases?

When is somebody going to wake up and simply start cutting these departments out and eliminating them completely?

What a joke. This country if an effing joke. Pathetic really, our forefathers would be disgraced and would probably put a bullet in our heads given the chance. We would deserve it.

And all these years, the MSM avoided covering the truth that Michelle wasted more money and more food than anyone ever. And they ignored all the poor minority children complaining that they had to eat junk.

So if they cover this at all, the MSM will treat it as teacher’s unions forcing Trump’s administration to do the right thing.

If the children are fed, the credit doesn’t really matter anymore.

Shouldn’t the Dept of Agriculture help farmers by ensuring that federal regulations don’t get in their way of productive farming, not telling kids what they have to eat at lunch?