Clearly, this is a “Witch Hunt”! 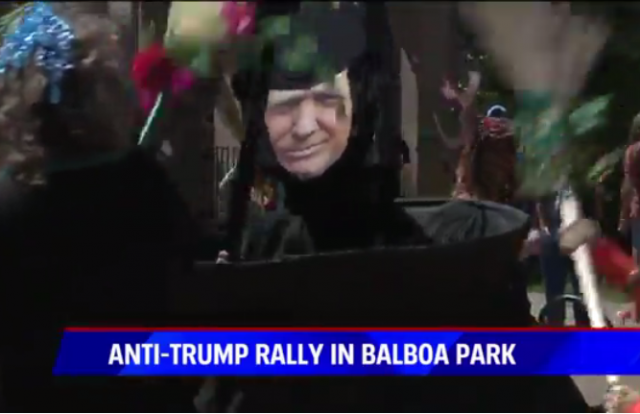 First, it was the “Pussy Hat” march.

Aleister just reported on the “Queer Dance Party for Climate Justice” in front of the First Daughter’s DC home.

The latest weird entry is the “Witches March” at Balboa Park in San Diego.

A gathering of so-called witches descended upon Balboa Park Saturday at “high noon” in an effort to impeach President Donald Trump by hex.

10News reporter Jessica Chen witnessed the dozen or so participants of an event called “Fire the Fool San Diego!” held, that’s right, on April Fools’ Day at the fountain in Balboa Park.

They dressed up like witches with green face paint, raised brooms above their heads and danced around a cauldron.

For those who may like to view this spectacle, the group plans to cast the next curse at midnight during every crescent moon. To be fair, the spells are more entertaining than the typical progressive fare usually offered at protest events (aged, under-dressed singers ranting and profanity-infused poems read by B-List actresses).

…Some components of the spell include a small “unflattering” photo of Trump, a Tower tarot card – ostensibly to represent Trump Tower – and a “tiny stub of an orange candle” or a “baby carrot.”

“I call upon you to bind Donald J. Trump so that his malignant works may fail utterly, that he may do not harm to any human soul, not any tree, animal, rock, stream or sea,” a sentence of the spell says.

At the end, a grounding exercise is recommended, including “a good, hearty laugh” because “remember – he hates people laughing at him.”

However, not everyone in their audience was persuaded by these mystical shenanigans.

“He’s not a politician. He’s more of a businessman so I feel he may bring some changes that need changes in Washington,” said Carlos Garcia.

“If the other people got in there, it would have been the same way for four years,” said Marty Fogle.

Leftists don’t even know how to react like grown-ups.

Revelation 21:8 – But the fearful, and unbelieving, and the abominable, and murderers, and whoremongers, and sorcerers, and idolaters, and all liars, shall have their part in the lake which burneth with fire and brimstone: which is the second death.

So, Hilliary secured the witch vote.

Did she ride in on her broom in time to speak? No wait….there wasn’t a big enough fee.

The Bible also says there are things unseen. This shouldn’t be taken lightly. Instead we should be praying that he and those around him be given and be surrounded with blessings & protection from demonic forces & influence, that
We should be praying God’s will be done and those with evil intent be brought to light.

The reason this didn’t work is that at the same time, I rolled 5 magic dodacahedrel dice and they all came up 9’s, a cast which invoked the Wizards Anti-Witch-Hex Boomerang Spell, which will cause their actions to instead impeach their own credibility.

I don’t know whether to laugh at them or feel sad for them. Maybe throw a quarter into their caldron for the entertainment value.

Too much time of their hands. Apparently the listings for Houses Needed to be Haunted has dried up.