For crying out loud, women can’t drive there! 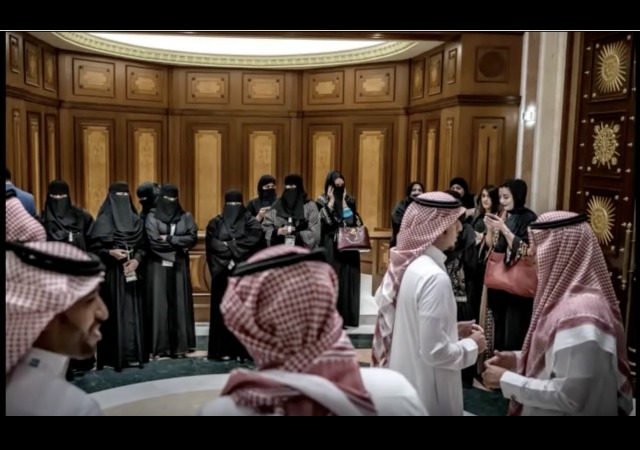 Unfortunately, I am not kidding when I say that the UN elected Saudi Arabia to the Women’s Rights Commission. It reminds me of when the UN elected Iran to the human rights council. Remember that?

Saudi Arabia received its spot when the Economic and Social Council voted on new members for the women’s rights commission, which wants to help promote equality for females. The commission’s website states that females “suffer violence and discrimination” and remain “under-represented in political and economic decision-making processes.” Females around the world also “lack decent access to basic education and face occupational segregation and gender wage gaps.” Too many countries still deny females “access to basic education and health care.”

Gee, what country falls into most of these categories? Saudi Arabia!

“Every Saudi woman,” said Neuer, “must have a male guardian who makes all critical decisions on her behalf, controlling a woman’s life from her birth until death. Saudi Arabia also bans women from driving cars.”

(Before I continue does anyone else find it ironic that somebody had to form a UN human rights watchdog group?)

In January, when those “progressive” females, which included a convicted terrorist and supporter of Sharia law, held that stupid Women’s March over supposed “female oppression” in America, I lost my mind. I blogged about actual female oppression in other countries and take a wild guess which country I hit first. SAUDI ARABIA.

Let’s take a look at some of the issues this Women’s Rights Commission wants to weed out from the world and why the board should look at its newest member….Saudi Arabia. Remember, a female must have a male guardian her entire life in Saudi Arabia.

This is the scariest part of all. Believe it or not, the male guardian has the ability to make the female’s medical decisions. He must accompany her to ALL of her doctor appointments:

This came after a member of the Council of Senior Scholars issued a “fatwa” (edict) prohibiting women from visiting male doctors without having male guardians present.

“Islamic law does not permit women to visit their doctors without male guardians,” said Qais Al-Mubarak, a member of the Council of Senior Scholars. “Women are prohibited from exposing body parts to male doctors in Islamic law, especially during childbirth. This does not include medical emergencies. Islamic jurisprudence makes exceptions,” he added.

Male guardians can only be the next of kin in Islam. They are sons, grandsons, husbands, brothers, fathers or uncles.

Females cannot leave their houses without a male guardian. She must receive his permission to travel or conduct official business.

In most of Saudi Arabia, females must cover their entire bodies except for the hands and feet. A few areas allow females to leave their faces uncovered. But that’s it. I noted how those female marchers in January couldn’t wear their beloved pussy hats in Saudi Arabia.

If someone caught a female speaking to a non-relative male, authorities can charge that female with adultery or prostitution.

Females in Saudi Arabia basically cannot drive. There are no laws, but restrictions basically make it impossible for females to enjoy driving a car. The governments force these citizens to receive a local license to drive and the places do not issue them to females. Rural areas allow a little flexibility.

Due to male guardianship, females do not receive much protection from domestic abuse. According to Kristine Beckerle, researcher for Human Rights Watch:

Despite a 2013 law that criminalized domestic abuse, “the law itself is deeply problematic in that it still maintains the rights of guardians to have some authority over their female dependents,” says Beckerle. In some cases, family reconciliation is given priority over a woman’s safety, according to the report; often, the male guardian is the abuser a woman has tried to escape.

“You can do all these little steps to try and respond to domestic violence, but until guardianship is eliminated there’s going to be this incredible tool in men’s hands to both abuse and exploit women,” she says.

The kingdom has segregated the schools by sex. But again, the female must receive permission from her male guardian in order to study. However, even with an education, her job will probably not pay her equally to her male counterpart. Yes, an actual gender wage gap. Throughout the years, Saudi Arabia has ended up towards the bottom of the list on gender wage gaps. From Forbes this January:

In Saudi Arabia, the nation tied for the second-largest gap in expectations and where women can’t legally drive, only 21% of women work or are seeking work.

Well, if you can’t drive, why bother?

Saudi Arabia even has laws that force OCCUPATIONAL SEGREGATION except in hospitals. But Saudi Arabia has attempted to “fix” this by establishing a new city for only female workers. So to comply with sex segregation complaints in the workplace, the kingdom decided to expand it. Okay…I’m having a hard time wrapping my head around this because the kingdom’s reaction makes no sense.

The UN is a joke and will always be a joke if the organization keeps allowing countries like Saudi Arabia and Iran to sit on these councils.

Do we know whether the Saudi delegation will include women? I mean women who are allowed to speak for themselves? If so, will they need permission from a man first? Will they be allowed free movement like the other delegates? Do they have to walk five paces behind the men?

So may unanswered questions.

I put together a webpage on Women Under Islam ( http://www.unshackledaction.com/women-in-islam ). Islam’s treatment of women is universally bad, but Saudi Arabia is possibly the worst. An excerpt from the webpage:

Saudi Arabia has some of the strictest restrictions on women. Some of these apply in some other Muslim countries, but they are far from universal. Regarding women in Saudi Arabia, “they can’t vote, they can’t hold jobs where they might be over men, they can’t drive, they can’t travel without male escorts, they are low-status persons for purposes of inheritance, suits in court; their clothing is restricted to shapeless garments and they remain their whole lives under the control of some male relative, be it father, brother, husband or son.” (from answers.com)

But Trump said mean things about wuhmin for God’s sake!!!!

This is one more example of the insanity of being in the UN. They no longer represent the best for the world we live in and instead are coalescing around an islamic core of values if you can even call them values. Look at the scandal that has plagued the UN for over twenty years of the pedophile gangs that work for the UN. Look at the absurd appointments of countries that have no human rights being appointed to human rights posts. No matter the issues, if they are good for the world then, Russia or China or both will oppose it. Why are we still in it? Can anyone justify the money we spend there for the good it creates?

Oh, you can call them values. The Islamist world certainly does value them.

That their values run diametrically opposite those held by the Western Free World doesn’t make them any less valued.

I wonder how many women suffer heat stroke wearing regular clothes and those black overgarments. Notice the men wear white and their faces and necks are open to air circulation.

They suffer Vitamin D deficiencies since they never see the sun.

Why should we stop here? Why is there a UN?

Child sex scandals, oil scandals heck, the list is long and endless. I remember back in the 60’s the John Birch society had billboards saying to get the U.N. out of the U.S.
There was a time that supposedly the U.N. was a spies paradise to turn people so we could get inside info. It’s way past time to shut it down. 2 day shut down notice and all sovereignty revoked for all U.N. personnel.