“They’ll look at this as one big joke. As far as the U.N. goes, they came here to protect us, but all they’ve brought is destruction.” 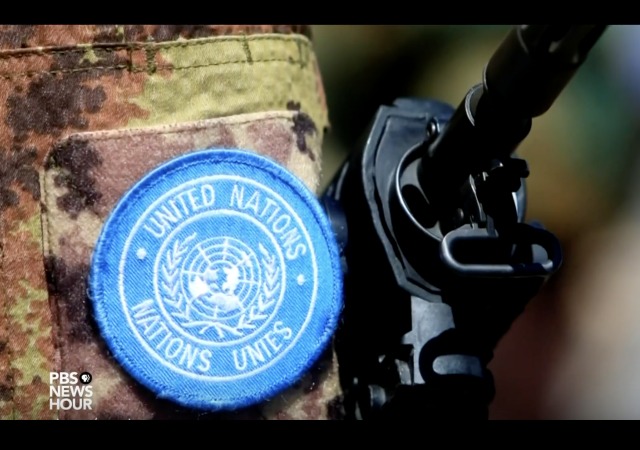 So awful. The Associated Press has uncovered an internal UN investigation into a child sex ring in Haiti by UN peacekeepers. According to the AP report, one individual from Pakistan received jail time while a court in Uruguay convicted four of “private violence.”

Peacekeepers from places like Sri Lanka and Uruguay came to the island in the recent decades and should have provided help and security to the abandoned children. While the peacekeepers had food, the report stated they made the children pay for it….with sex.

The crimes occurred at the Habitation Leclerc resort in Part-au-Prince, which once held a soft spot for tourists and celebrities. It fell apart by 2004 and mostly children remained, “either orphaned or abandoned by their parents.”

The UN stepped in after the ousting of President Jean-Bertrande Aristide in 2004. Sri Lanka sent 900 troops and they “were based near the former resort.”

Yes, the sexual exploitation and rape of children have been going on that long.

I don’t even know where to start. The AP reported:

Here in Haiti, at least 134 Sri Lankan peacekeepers exploited nine children in a sex ring from 2004 to 2007, according to an internal U.N. report obtained by the AP. In the wake of the report, 114 peacekeepers were sent home. None was ever imprisoned.

The UN interviewed victims and witnesses in 2007 while the peacekeepers kept the sex ring going.

Victim V01 told the AP that for three years, between the ages of 12 and 15, “she had sex with nearly 50 peacekeepers, including a ‘Commandant’ who gave her 75 cents.” The men even taught the children how to speak Sinhalese so they “could understand express sexual innuendo.” The UN investigators noticed the children used the language to communicate.

V02, who was 16 when the U.N. team interviewed her, told them she had sex with a Sri Lankan commander at least three times, describing him as overweight with a moustache and a gold ring on his middle finger. She said he often showed her a picture of his wife. The peacekeepers also taught her some Sinhalese so she could understand and express sexual innuendo; the children even talked to one another in Sinhalese when U.N. investigators were interviewing them.

V03 identified 11 Sri Lankan troops through photographs, one of whom she said was a corporal with a “distinctive” bullet scar between his armpit and waist. V04, who was 14, said she had sex with the soldiers every day in exchange for money, cookies or juice.

During her interview with investigators, another young victim, V07, received a phone call from a Sri Lankan peacekeeper. She explained that the soldiers would pass along her number to incoming contingent members, who would then call her for sex.

The boy, V08, said he had sex with more than 20 Sri Lankans. Most would remove their name tags before taking him to U.N. military trucks, where he gave them oral sex or was sodomized by them.

Another boy, V09, was 15 when his encounters began. Over the course of three years, he said he had sex with more than 100 Sri Lankan peacekeepers, averaging about four a day, investigators said.

The peacekeepers also infected many of their victims:

Haitian lawyer Mario Joseph has been trying to get compensation for victims of a deadly cholera strain linked to Nepalese peacekeepers that killed an estimated 10,000 people. Now, he is also trying to get child support for about a dozen Haitian women left pregnant by peacekeepers.

Other peacekeepers forced themselves on their victims. The AP continued:

In one particularly grim case in Haiti, a teenage boy said he was gang-raped in 2011 by Uruguayan peacekeepers who filmed the alleged assault on a cellphone. Dozens of Haitian women also say they were raped, and dozens more had what is euphemistically called “survival sex” in a country where most people live on less than $2.50 a day, the AP found.

A Brazilian peacekeeper raped 16-year-old Janila Jean when she was a virgin three years ago. She told the AP she imagines “strangling my daughter to death” and spends her days in tears. She lives with three other women raped by peacekeepers. These women never reported the rapes out of fear or possibly face more rapes. Some feared they would see their rapists again.

The AP documented a few other cases:

In July 2011, four Uruguayan peacekeepers and their commanding officer allegedly gang-raped a Haitian teenager. The men also filmed the alleged attack on their phones, which went viral on the internet. The men never faced trial in Haiti; four of the five were convicted in Uruguay of “private violence,” a lesser charge. Uruguayan officials said at the time that it was a prank gone wrong and that no rape occurred.

The following year, three Pakistanis attached to the U.N.’s police units in Haiti were allegedly involved in the rape of a mentally disabled 13-year-old in the northern city of Gonaives.

U.N. officials went to Haiti to investigate, but the Pakistanis abducted the boy to keep him from detailing the abuse that had gone on for more than a year, according to Peter Gallo, a former U.N. investigator familiar with the case.

Unfortunately, the UN does not have “jurisdiction over peacekeepers, leaving punishment to the countries that contribute the troops.” A few times the rapists have received punishment, but even then it doesn’t come close to what they deserve after their destructive actions on these children.

Take for example the case I mentioned above about the Pakistani peacekeepers. A Pakistani military tribunal and went back to Pakistan. Officials in Pakistan did not “allow the U.N. to observe the proceedings.” No one knows if anyone interviewed the victims. Only one man received prison time.

I hate to say this, but it’s not just in Haiti. I cannot remember how many times I covered stories of UN peacekeepers raping the people that needed the most help. Rape accusations have plagued the UN in the Central African Republic, one of the poorest nations.

Dozens of French peacekeepers faced accusations of sexually abusing children in the former French colony, including forcing young girls to have sex with a dog. UNICEF interviewed 98 girls and the reports went to top officials at the UN. The French peacekeepers went back to France. However, in January, a judge decided not to pursue charges.

In 2005, an internal UN report found numerous sexual abuse accusations against peacekeepers in Haiti, Sierra Leone, Bosnia, Cambodia, East Timor, and the Democratic Republic of Congo (DRC). They also faced allegations in Liberia of “having sex with girls as young as 12.” The peacekeepers often exchanged sex for food or money.

They also managed to vector diseases into Haiti.

Just what they needed.

I’m sure the Clinton Foundation worked tirelessly on this problem. They spent an inordinate amount of time there dealing with child trafficking.

You got the spelling wrong: they are “UN Piece Keepers.”

Imagine: the left is trying to foist this corrupt organization to govern our nation.

As time goes on, the grotesque travesties of the clintons and obama become more apparent, even to the most under-informed.

The reports I’ve been reading for decades in the European press (not much here in the US, for whatever reason) implicated UN troops—most often troops from West African nations—in rampant prostitution rings, child abduction and rape, same old same old, over and over again. Even better; in the early AIDS days, enthusiastic UN rapists seem to have been the primary vector spreading the disease throughout the African continent.

The only thing new here is that this is the first mention I recall of French, Uruguayan or Pakistani troops being heavily involved. I have seen reports of all being involved in criminal rings selling what should be free aid supplies for exorbitant sums, but not so much about the industrialized rape industry.

You are correct — UN atrocities were well-documented at least as far back as 1964 by Griffin G. Edward in “The Fearful Master: A Second Look at the United Nations.” That book made me a firm, life-long opponent of the UN when I was just 13. I have read the book numerous times over the years since, and I have found nothing to make me question its influence on my thinking.

As of this morning, Abebooks has 28 copies of this hard-to-find book in stock, mostly at reasonable prices. Amazon has 4 copies at outrageous prices. It is still an excellent reference that is pertinent to today’s debates on America’s membership in the UN. I recommend this book to anyone who is building a comprehensive argument against continued support of the utterly immoral UN.

Griffin G. Edward was also the author of the 2002 book “The Creature from Jekyll Island: A Second Look at the Federal Reserve.” Abebooks has, at this moment, 92 copies of this expose, which was well-received by opponents of the Fed.

There aren’t too many books which would tempt me into dealing with AbeBooks ever again.

Yet more reasons to defund the UN and kick them out of their digs in NYC.

And then there’s this: Unfortunately, the UN does not have “jurisdiction over peacekeepers, leaving punishment to the countries that contribute the troops.”

WTF?!?! If the U.N. doesn’t have “jurisdiction over peacekeepers”, then they shouldn’t have authority to send “peacekeepers”. Period. Full stop.

If they can send them, they should have jurisdiction to control and discipline them. If they don’t have such jurisdiction, they shouldn’t be sending so much as a dog catcher.

Remember 1995 when the Marines had to go back to Somalia to extract the UN peacekeepers.

Actually I think you’ve got that backwards. The “Blackhawk Down” incident was probably the only time in history where UN troops were needed to rescue US military who had gotten bogged down in Mogadishu after a botched raid. Of course, if Bill Clinton hadn’t veto’d the commander on the ground’s request to have an AC-130 flying overhead they wouldn’t have gotten bogged down. And oh yeah, it took something like eight hours for the blue-hats to get their shit in gear and actually roll into the fight. It was a complete cluster-f*$#. The book by Mark Bowden is a great read.

Actually, in this case you both are correct…ish.

The Rangers and Delta were sent into Mogadishu after the Marines withdrew and Mohamed Farah Aideed’s cutthroats slaughtered a formation of UN soldiers.

Garrison had asked for light armor, and it was denied him.

And yeah you guys are right…. I was thinking of the Blackhawk Down incident itself… Old0311 was referring to what brought the special ops to Mogadishu in the first place. “Cutting the head off the snake” was the objective that led to the debacle.

Why does the US support this criminal enterprise? Move the UN Headquarters to the Sudan, Somalia or some other desirable place. We’ll see how many corrupt dictatorships show up.