On campuses and progressive enclaves, riots and violence against “offensive” speech are being normalized. 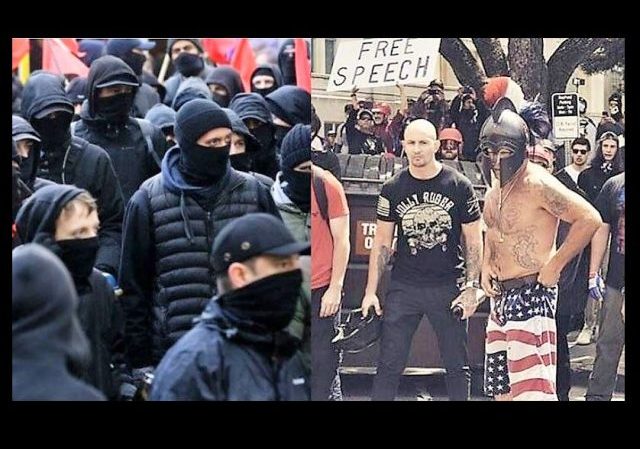 The student editors at the Wellesley College (Hillary’s alma mater) student newspaper wrote an editorial recently that rightly is getting much criticism and mockery.

The Editorial is titled Free Speech is Not Violated At Wellesley.  The argument is that shutting down what the editors call “hate speech” is not a violation of free speech:

Many members of our community, including students, alumnae and faculty, have criticized the Wellesley community for becoming an environment where free speech is not allowed or is a violated right. Many outside sources have painted us as a bunch of hot house flowers who cannot exist in the real world. However, we fundamentally disagree with that characterization, and we disagree with the idea that free speech is infringed upon at Wellesley. Rather, our Wellesley community will not stand for hate speech, and will call it out when possible.

Countering “offensive” speech with more speech is in keeping  with the tradition of free speech. But it doesn’t end there for the Wellesley Editors, they advocate shutting down speech they deem “hate speech”:

Wellesley students are generally correct in their attempts to differentiate what is viable discourse from what is just hate speech. Wellesley is certainly not a place for racism, sexism, homophobia, Islamophobia, transphobia or any other type of discriminatory speech. Shutting down rhetoric that undermines the existence and rights of others is not a violation of free speech; it is hate speech. The founding fathers put free speech in the Constitution as a way to protect the disenfranchised and to protect individual citizens from the power of the government. The spirit of free speech is to protect the suppressed, not to protect a free-for-all where anything is acceptable, no matter how hateful and damaging.

The attitude of the Wellesley editors is hardly uncommon on campus. We’ve covered dozens of stories in which allegedly “hateful” speech has been shut down by progressive protesters, sometimes violently. Middlebury College’s recent riot shocked even many progressives, Student Mob at Middlebury Attacks Speaker and Sends Prof to Hospital. But the logic behind and justification for the Middlebury College riot was exactly that as laid out in The Wellesley Editorial.

Which takes us to Berkeley.

A rally billed as “pro-free speech” was held in Berkeley, California, ostensibly by Trump supporters, on April 15, 2017.

It was planned to coincide with Tax Day rallies planned by Democrats to put pressure on Republicans in Congress.

The pro-Trump rally, in turn, was countered by the same so-called “Antifa” (anti-fascist) groups who, among other things, tried to set fire to the student center when Milo Yiannopolous appeared and beat people in the street.

At the rally yesterday, it seems pretty clear, including from the CBS News report, that the event turned violent when Antifa confronted the Trump rally.

Was it a deliberate provocation? Well, yes if you consider that Berkeley Antifa doesn’t like people who disagree with them, so merely holding a Trump-related rally would be considered a provocation.

There seems to have been an element in the both crowds who were itching for a fight:

One guy, being described as a “white supremacist,” punched a girl in the face in a clip that is going viral:

It’s a thin line from the Editorial in the Wellesley student newspaper to the Antifa rioters in Berkeley. Indeed, if events at Middlebury College and elsewhere are any indication, there may be no line at all.

“Jesus will judge you” was a nice touch as the wearer of the jacket bearing that message fully waded himself into the melee.

Didn’t Jesus Himself wade into a conflict or two?

Isis, North Korea, russia, china – even all together, these entites pale in comparison to the anti-American Hitler Youth we have allowed our schools to breed. These maniacs, coupled with the islamists wr havw allowed to migrate into the US will kill usnfrom within. And in a relatively short time.

I’m glad to see the Free Speech crowd, out there giving as good as they get.

About the female: she walked up to the man to intervene. She made a mistake. She was up in a couple of seconds, so evidently no additional brain damage.

The antifa crowd will do their best to make the pro Trump people look like the bad guys here.
The black clad, mask wearing antifa anarchist is now painted as a poor, defenseless woman horribly assaulted by a big bad white man…

I watched that clip of the woman getting punched over and over. Here is what I observed – She advanced on him. She reached in and grabbed him with both hands just under his shoulders. She attacked him.

All this was before he hit her.

“Shutting down rhetoric that undermines the existence and rights of others is not a violation of free speech; it is hate speech.”

Once more demonstrating the progressives don’t have a handle on the meaning of the word “irony.”

They do have a pretty good grasp on the purpose of the First Amendment, but again, missing the irony, they don’t realize that they’re “suppressing” the speech of people whose views differ from there own; exactly the speech they admit should be protected.

BTW, I’m shocked to read that “Milo Yiannopolous appeared (at Berkeley) and beat people in the street.”

Objection, your honor, if you read their Editorial you’ll see they’ve convicted without trial all people who come to Wellesley with beliefs unlike theirs as sub-humans who must accept their wise teachings. Then if these sub-humans continue to speak hate speech or refuse to adapt their beliefs (to conform with said enlightened groupthinkers), then hostility may be warranted.

At Wellesley, its ‘reading and writing and politics, taught to the tune of a hickory stick’.

They call themselves “Antifa”, which they insist stands for anti-fascist yet they are the ones who always show up looking, sounding, and acting like fascist thugs from the 1930’s. It appears that none of these cretins has the slightest idea what fascism really is. Inigo Montoya nailed it: “You keep using that word. I do not think it means what you think it means.”

Unfortunately Montoya’s actor is an unfathomable nitwit, devoid of sense and sensibility.

These very uneducated cretins need a lesson in history:

Abhorrent speech, and rallies, from those with which we disagree are protected under the Constitution.

These “children” are the poison fruit that resulted from letting the left dominate our culture – media, education, entertainment. They have absolutely no moral foundation: they are indoctrinated in and EMBRACE the wrong-headed thinking that tolerance = “my viewpoints or crack heads” and moral relativism = “I believe whatever I want, I define what is right – for me – and whatever I believe is RIGHT” and the obvious invention of terms to shut down free speech, like the term “hate speech” itself.

This is very similar to the 1960’s, but the fundamental Judeo-Christian moral foundation of the country is virtually gone today; that is what brought us back from the brink then.

What will bring us back now?

I want to add two additional articles to read – both are good overviews of our nation’s laws, and get to the root of what this Berkley riot demonstrates:

The latter piece, by Volokh, is exceptional.

I actually responded to the article with a comment. In my response I simply stated how indoctrination is where you teach only one side of an argument and expect the students to regurgitate it while an education is giving both sides of the story as well as the tools that would allow the student to intelligently evaluate them to determine which was best while showing their thinking and criteria used to determine the superior argument. The automatic labeling one side as hate speech thwarts this educational process.
>
I also went on to state that the claim of hate speech can actually devolved into censorship because it seems that those who define what hate speech is are those who often do not want the other side of an argument known. In other words, the definition of hate speech is subjective. This is especially important when it comes to important issues such as welfare, reasons why the poor are poor, stem cell research, and so forth, where demanding that the other side of an argument not be heard because it is hate speech actually accomplishes nothing more than to stifle forward progress thereby disallowing the determination of superior solutions.
>
Eventually my comment was deemed inappropriate and they refused to publish it. In doing so, I really think they did a better job of making my case than I did.

NO MASKS at public events !
I have been told that this is supposedly illegal.
Where is the ENFORCEMENT ??
Again, CRIMINAL actions, NO CONSEQUENCES!
This will not end well !

Catherine Rampell, an Op-Ed columnist for the Washington Post, last week provided what she said were five good reasons not to suppress a speaker whose ideas differ from one’s own. Not included in her list was that the speaker might be right. So much for what was once called “keeping an open mind.”

The fun that can be had with the fluidity of gender identity.

Jeff Cooper said it best. “Let us reflect upon the fact that a man who covers his face shows reason to be ashamed of what he is doing. A man who takes it upon himself to shed blood while concealing his identity is a revolting perversion of the warrior ethic.”

There is NO “line” between the two;
they are TWO HEADS of the same
TOTALITARIAN HYDRA we must destroy.

Well, colleges could make this an additional sport, like football and basketball. Have CBS or FOX pay for the broadcast rights and sell tickets. They could modify their admissions to allow for stronger, bigger and nastier riot leaders and players.

SAT along with Thug Aptitude Testing would enable the top schools to build powerful teams.

With the additional income Thuging would generate through TV and tickets, there would be revenue from ski masks, shirts and those big hands (only use a different finger) and that money could go to support a far larger Diversity Staff.