The California natives are getting politically restless

The California natives are getting politically restless

California elections of 2018 may turn out to be a referendum…on the Democratic Party. 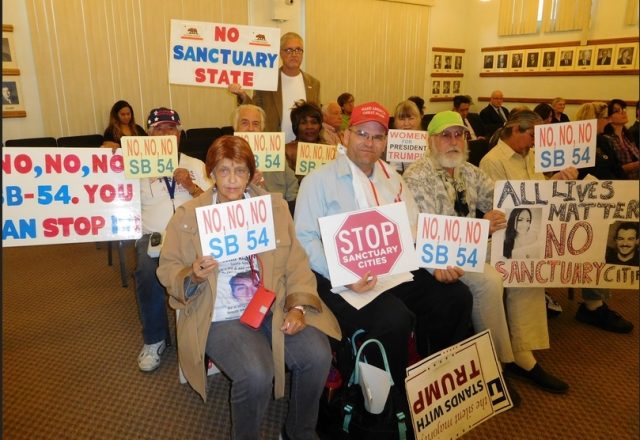 I have previously noted that many of California’s legal citizens were extremely unhappy with the Democratic super-majority in Sacramento ramming through unpopular legislation, such as the “Sanctuary State” measure or the new gas tax.

Now, the first signs of a substantial political fallout are on the horizon as citizens are organizing a Golden State version of the Resistance.

To start with, Californians are now preparing to strip the Democrats of the super-majority status they have abused.

Carl DeMaio, a talk radio host and former city councilman in San Diego, said Tuesday that plans are moving forward to launch a recall of Sen. Josh Newman, D-Fullerton, who voted for the $52 billion road repair package, paid for by fuel taxes and registration fees, just four months after he took office.

Sen. Josh Newman, left, is joined by his family during the national anthem in 2016 before he was sworn in to office. Carl DeMaio, a talk radio host and former city councilman in San Diego, said Tuesday that plans are moving forward to recall Newman, D-Fullerton, who voted for the $52 billion road repair package paid for by fuel taxes and registration fees. Hector Amezcua [email protected]

“This is the right strategy. There’s consensus on it. And we are moving forward,” DeMaio said.

While the gas tax is the impetus of the action, DeMaio said he and others in the nascent coalition to oust Newman are primarily setting their sights on the Democratic Party’s two-thirds supermajority in the Legislature.

Next, one of California’s cities has voted to oppose the “Sanctuary State” measure. Dawn Wildman, key organizer for California Tea Party Groups reports:

“The Glendora City Council Members voted 5 to 0 to officially OPPOSE the CA Sanctuary State bill. The city council will submit an official letter of opposition to Sacramento.”

Glendora is a city within the San Gabriel Valley of Los Angeles County, a fairly blue area in this state that went for Hillary Clinton by over 70%. The video of the vote is here:

Finally, some Legal Insurrection readers may recall former Los Angeles mayor Antonio Villaraigosa, who made the region a utopian hell with a myriad of insane regulations. He is also “ethically challenged“.

Villaraigosa, who served as the city’s mayor for eight-years, broke the record for the largest ethics fine levied in California state history in 2011 — $41,849 — for failing to disclose free tickets he gave away to dozens of sports and entertainment events. He wound up paying back the city $42k.

During his time as mayor, Villaraigosa was the subject of countless ethics investigations. In 2007, the Los Angeles Ethics Commission accused him of 31 ethics violations surrounding his 2003 run for City Council.

Villaraigosa is running for governor in 2018 and made a surprise appearance at the Cudahy City council meeting. The reception wasn’t as warm and encouraging as he may have anticipated:

The good citizens of Cudahy City shouted, “You’re corrupt,” and “Don’t run for Governor” as Villaraigosa gamely smiled and ignored the chants. In other words, He Persisted.

It may turn out that the California elections of 2018 will be a referendum on the Democratic party, much as the recent Kansas congressional special election was supposed to be a referendum on President Trump. However, if Californians are already demonstrating at city council events and planning recalls, I don’t think it’s going to be as positive a result…unless victory is redefined as is was for Kansas.

It won’t happen unless we get some GOOD Republicans to run. The Bush/Rove Mob gutted the California GOP State Committee and ever since, we haven’t had a Republican hold statewide office. That hadn’t happened since 1932. Trump will have to get involved.

There are plenty of conservative voters in CA but you can’t win when there is no one on the ballot to vote for. Thank you George Bush! Good job!

I thought that CA changed rules so that the top two vote getters in the primaries move onto the general election?

So, if the Ds only have two people and the Rs have many options (like the 2016 R primaries), the Ds will always win.

You can blame the GOP for that too because they had to go along with it to make it happen. It’s like I’ve said for years now, it’s not the Democrats who destroyed CA but the Republicans. Just look at what they are doing in DC now that they control EVERYTHING! The only team on the field and they still refuse to score!

The entire system is hopelessly corrupt. California can’t vote itself out of its corrupt one-party reality. And if electing Trump on the “drain the swamp” mandate doesn’t work, and it isn’t working yet, then it may be time for the “torches and pitchforks” part. This is exactly why the founders insisted on the 2nd amendment.

Sometimes I think someone at the GOP was thinking, “Top two advance, huh? That means if we field 8 candidates and they only field two, there’s 10 total candidates, and that means an 80% that one of both of ours advance, right?”

They seem consistently mystified by the reality of how elections actually work. (They may also be from Las Vegas, with the above logic — the odds of winning any particular dice throw don’t change; whether or not you can get a “winning” throw depends mostly on one factor: how many times you throw.)

They also consistently put up the scrapings from the bottom of the barrel as candidates, when they have a plurality of VERY smart talent — both available and willing — to choose from instead (which again, shows that they don’t know how elections actually work).

Look, I get it: political savviness is hard. Coming up with winning electoral strategies as the minority party is hard. BUT, if they’re not up to it — if they’re going to dabble when they need to plunge — then maybe … just maybe … they shouldn’t be in politics.

The mainline GOP may not be the Evil Party (that distinction is wholly-owned by the Democrats), but it is definitely the Stupid Party.

The beginning of the end was the end of the Cold War and devastating recession in the early ’90’s. While California had been trending more conservative in the mid-90’s (GOP picked up the Assembly for the only time ever since Reagan’s first term as Governor and measures like Prop. 187 and 209 were passed), the first nail in the coffin was the devastating ’98 elections.

By the time Gov. Moonbeam returned in ’10, it was all over. To many sane people had fled California (sadly along with plenty of Progressive locusts who are now destroying other Western states), only to be replaced by imported illegal aliens.

California had gone from a diverse and balanced economy to one dominated politically and financially by the Bay Area hardcore Leftists, buoyed by the electoral strength of the Los Angeles area.

There is no way back that doesn’t involve pain and suffering one someone’s part.

It was actually over once the Bush/Rove mobsters crammed the Governator down our throats. We would have been perfectly fine with Governor McClintock. But the corrupt “masters of the universe” wanted to destroy the GOP in CA. Mission accomplished. I’ll be outta here by next year.

McClintock, the most qualified, had no chance. Period. End of story.

What the hell ever happened to Mr. MECHA, Cruzz Bustamante?

What the hell ever happened to Mr. MECHA, Cruzz Bustamante?

In my view, not enough!

Kaliphornyah has a reputation for being somewhere left of the Saul Alynskites. But the citizens there must realize that no popular or grass roots political initiative has any hope of breaking the One Party control. The Party controls the State and the State controls the proletariat.

Given the amount of voter fraud inevitable in a state that both accepts illegals and refuses to protect the voting franchise I don’t expect much change. Maybe when the federal government forces California to clean up both voting and identification things may improve but that will be take a lot of time.

Yes. And to think I read his description of California government in Friday as satire…

CA was a Republican experiment to find out what might happen were the RNC to decide to just merge with the DNC and get rid of the 2-party kabuki. I guess we’re stuck with the kabuki for the foreseeable future. The Masters of the Universe have spoken (behind the curtain, of course).

It never rains in…..

A good first step would be to make politicians who buy union support with insane pensions have to pay for the pensions when granted, not sometime in the future.

Entities granting pensions should be required to purchase an annuity that will pay 1 year’s worth of pension every year for their employees.

i don’t believe Dems will get punished, recall the commies and
purge the voter rolls