But it’s a WIN for the Democrats! 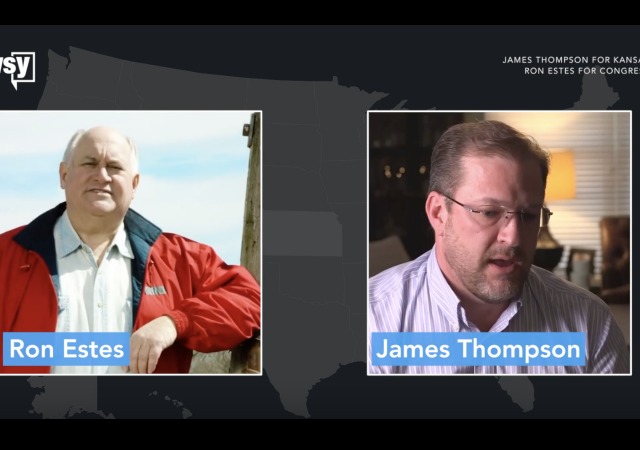 Democrats tried to spin the win into a positive because the margin of victory was small. Naturally, many members of the political media joined them.

The Kansas seat opened up after Mike Pompeo left to head the CIA. The Hill reported:

Even national Democrats got involved a day before the race with the Democratic Congressional Campaign Committee (DCCC) doing 25,000 live calls in the final two days to support Thompson.

Thompson, who won the endorsement of Sen. Bernie Sanders-aligned group Our Revolution, repeatedly tied Estes to Kansas Gov. Sam Brownback (R), who was ranked the most unpopular governor in the country in a poll from late last year.

The New York Times was not much better:

While Mr. Thompson fell short, his unexpected strength represents a warning shot toward Republicans. And it will galvanize Democrats’ candidate-recruitment efforts for next year’s campaign.

A “super PAC” aligned with the House speaker, Paul D. Ryan, also intervened, paying for live-turnout calls to likely Republican voters. All told, national Republicans spent about $150,000 on the race.

Thompson could not even take the high road:

“Mr. Estes did not beat us,” Mr. Thompson told supporters after the race was called. “It took a president of the United States, the vice president, the speaker of the House, a senator coming into our state and a bunch of lies to drum up a vote.”

His campaign and the DNC also tried to make this look like a win for the left:

“I think the momentum we’ve seen here on the ground, and outpouring of support from Democrats across the country into races like this, is a good signs for Democrats nationally regardless of what happens tonight,” Thompson campaign manager Colin Curtis said before the election.

“Kansas’ 4th Congressional District is ruby red and should never have been on the table,” DCCC communications director Meredith Kelly said in a statement. “This massive swing from the 2016 presidential results should set off alarm bells for House Republicans.”

Twitter was where Democrats went to brag about their “win”, and a few objective observers weighed in:

@DavidMDrucker The only news from tonight is that contrary to the DC narrative, the Dems failed to make KS-4 the MA Sen race that it was for Rs in 2010.

W/all due respect senator, the Dem in the fall got 81K votes and the Dem in today’s special got 52K votes. How’s that “they’re pissed?” https://t.co/JmaSH83HxL

Yeah I remember when we actually won a MA Senate race AND a NYC House race and then went on to defeat Obama and take the Senate in 2012. https://t.co/9RLgwSJ82r

A pro-choice Berniecrat gave Republicans their toughest fight in #KS04 since 1994.

Poor Donna. Your talent lies in helping Berniecrats lose, not in defeating the #GOP. #KS04 pic.twitter.com/2NbE2KVeOb

Kansas might not predict a damn thing, but it should inspire us to fight like hell in every district, in every state.

If you are thinking about running for anything – tonight's close race in #KS04 should be all the evidence you need Ds can win anywhere in 18 https://t.co/GKj399Xvdh

Even Rachel Maddow explains why the GOP should be TERRIFIED with a victory.

He won WITH 52% of the vote, not BY—YUGE difference!

The real lesson that Dems should be taking from this race (but that they won’t, because they can’t) is that a CONSERVATIVE democrat, who buys into a bunch of Trump’s populist ideas, can do pretty well in a red state. That’s what Thompson is, and his brand will ALWAYS be appealing to a significant number of voters in the center of the country.

But when faced with a hard core bicoastal liberal, like Hillary, or Warren, or anybody else they’re likely to run for President, Kansas will go for the Republican nominee by double digits every time.

One more time – for many, many voters, the vote in last November’s election wasn’t so much FOR Trump; it was AGAINST Hillary!

“That’s what Thompson is…”

He was also a registered R until 2016. the commies ran an R against an R, in a special election with <half the normal turnout, and still couldn't come close.

Epic fail by the progs in every respect.

Generally special elections mean little. No matter how the dens spun it, they still lost!

Saying that, if they were fortunate to have won, Paul Ryan would have been very nervous about his job.

Three more special elections to and maybe Ryan will be asked to leave. We can only hope!

So long as Trump is in the White House the FakeNews outlets will report that: good is bad, white is black, right is wrong. TDS on display.

It was the model rocket vote that carried him over.
( Inside joke. )

It was the model rocket vote that carried him over.
( Inside joke. )

Take a look at the voting machine malfunctions, and the massive deviation from previous elections.

Since Kansas has paper ballots and voter ID, those votes are real. A recount may push five or ten votes one way or another, but nowhere near what (D) would need.

It must have been those pesky Russians again…

I’m a little surprised Thompson didn’t make it more about the negatives than just “lies”. That’s really old and trite. Couldn’t he and his party have made it about the Russians or something more headline grabbing?

And let’s be realistic. A win by 6 points by a candidate who has a lot of negatives pointed out like his ties to Brownback over a Democrat selected with high conservative traits (vet, guns, using the word Constitution in every sentence, etc.) is pretty significant.

Yeah but we won the popular election. But the electoral college. But the Russians. But misogyny…

If losing by a small margin is the new definition of “winning” for the Dems they are in even worse shape than I thought. All the “spinning” must have made them dizzier than usual.

A quick comment on the KS SoS website numbers: If you check out the individual county totals, they parallel Trump’s percentages fairly well. Inner Sedgwick county (the largest city in the region) went (D) by 50/48% while the rural areas around went (R) by 3-1 or 4-1 ratios.

And much like the Trump election, the Democrat party poured cash into the area and plugged their minions to do the same while running a candidate who proclaimed a set of values his actions did not back up. Interesting how the (D) cash invested was never really reported, but every MSM organization highlighted the (R) cash as “frantic” or “panic” and even “desperation” about losing the race and going back to being a minor back-bench party etc…

And now that the (D) has been whomped, and the final percentages show a good whomping, they develop amnesia about their predictions and declare second place in a two-man race to actually be a victory.

May they win many, many ‘victories’ just like this in the future.

No Russians? Don’t they love us any more?

According to Daily Kos Elections, Ds have now outperformed in 7 out of 9 special elections in state legislatures since Trump was elected. Now in a Congressional special election in Kansas they also outperformed. It’s looking like a trend. Not a fluke.

Everything, and I literally mean everything, Dems do is designed to sink Trump’s approval ratings. The farther he is below 50%, the more likely it is they will retake the House.

That’s why they are feeding stories to the press about the supposed Trump campaign collusion with Russia. Those will never end. That’s what the Gorsuch obstruction was about. And I am cynical enough to believe that the reason why so many Democrats supported Trump launching missiles on the Syrian airbase is because they know from the GWB presidency how easy it is to turn the public against foreign interventions when things don’t go right. That’s how they won back the House in 2006.

Ds have got the momentum. Rs better not get complacent.

“Ds have got the momentum.”

No, they don’t. They only have fake news. In the end, fake news gets exposed. Short term thinking. Long term losing. The D commies are losing nearly everywhere.

notamemberofanyorganizedpolicital in reply to MaggotAtBroadAndWall. | April 12, 2017 at 3:49 pm

Everything the Leftists (Communists…er…Democrats) are trying is falling upon their own heads like a ton of bricks each time.

Here’s that momentum, precinct by precinct for the last 3 presidential elections, just scroll down a bit:

No one is complacent but even after 5 months of continuously biased fake news reporting Dems still couldn’t turn this seat over!

They couldn’t turn it over even when they recruited a republican to switch to D (2016), in effect they ran an R against the R and still lost.

If all they want to claim is that the full force of the national D Party, when faced with only the local resources of one district’s Rs, would have been enough to win this district, then sure, that’s reasonable, but so what?