Student Protesters Ejected from Charles Murray Speech at Villanova U.

Student Protesters Ejected from Charles Murray Speech at Villanova U. 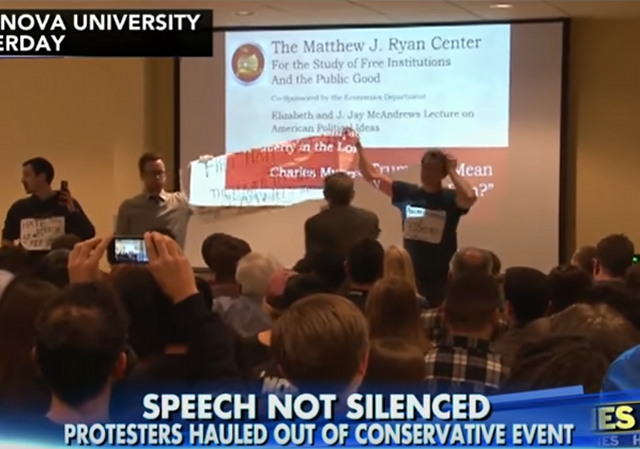 Charles Murray gave a speech at Villanova University in Pennsylvania this week. In sharp contrast to the recent incident at Middlebury College which sent a professor to the hospital, student protesters were removed from the event.

A group of protesters briefly halted a speech from the controversial scholar Charles Murray at Villanova University Thursday – but if they’d planned to shut it down, it didn’t work.

The activists chanted “No Murray! No KKK! No fascist USA!” among other things, at the school outside Philadelphia. Video showed two protesters identified as faculty members holding up a banner – before a school official ripped it down.

Campus safety officers escorted the protesters out of the hall, and Murray returned to his lecture – about the effects of so-called “Trumpism” on liberty.

Critics have said Murray linked intelligence to race with scientific racism in his 1994 book, “The Bell Curve,” a claim Murray has denied.

His visit to Villanova came on the heels of a lecture at Vermont’s Middlebury College earlier this month that escalated into rioting after a group of protesters rocked a car.

Here’s a video of the moment described above:

Here’s how the student newspaper “The Villanovan” described the scene:

As the guest took the podium, a group of protestors, including Associate Professor Gabriel Rockhill, Ph.D. and Adjunct Professor John Patrick Schultz, both of the University’s Philosophy department, stepped to the front of the room. Holding several signs between them, the group chanted over Murray, refusing to allow the lecture to continue. Audience members began to engage with the protestors, and at one point Murray was removed from the room. Fifteen minutes later the group, called “Nova Resistance,” was escorted outside by Public Safety officials, and Murray reclaimed the podium.

“Nova Resistance set out to show this afternoon that Charles Murray has no right to speak at Villanova,” the group said in a later statement. “By inviting Murray – after having rescinded an invitation to a queer activist, whose ‘free speech’ was apparently less important – Villanova offers his ideas the false veneer of respectability. We refuse to be complicit in our silence for the sake of the false niceties of academic conformism, or the fear of powerful economic and political forces framing ‘open debate’ on campus.”

The last part of that name has a familiar ring doesn’t it?

Villanova should get Middlebury’s federal funding. That would certainly get the leftists excited.

But a condition should be added – the suspension or firing of the two idiotic highly-paid college professors who blocked free speech.

notamemberofanyorganizedpolicital in reply to JOHN B. | April 1, 2017 at 2:06 pm

What can we do to make this happen?

It’s almost a month since “president” Laurie Patton promised discipline for the savages at Middlebury, but so far, nothing.

Do they think we forgot? Or (hoping for this one) her next lifesaving Federal aid check gets held up because she never did any of the things she promised to address the mob violence and criminal behavior on the part of ‘students’ and employees. At least here they kicked the foaming-at-the-mouth resistance out of the building!

She figures there are 5-6 weeks until summer break… just trying to run out the clock and the whole thing will be forgotten.

The only way these school leaders will act is if they feel it in the Annual Fund.

Or a ding at the US NEWS college rankings. That would get more attention than anything these loons could imagine.

I paid Nova about a quarter million dollars for my son’s BSME. Engineering students didn’t have much spare time for protesting.

I know exactly where the protesters are on The Bell Curve.

How does Charles Murray qualify as a “conservative” social scientist? Racism is not a conservative social value, regardless of what the Democratic Party has to say.

How does he qualify as a “scientist?” It seems to me that anybody who publishes a book where the data is 180 degrees off the thesis (that’s scientist for “is bullish!t”) can be readily handled in a debate.

Except that all the SJWs can manage is a handful of chants.

Oh, well, it’s not for me to educate either them or him.

And critics have said that progressive protesters who shut down campus civil proceedings should be expelled from the University and jailed.

I vote for number 2.

“Professor Rockhill? Good news. They’re remodeling your office. Your things have been removed already and taken over to the athletic building in a temporary cubicle until the remodeling is complete in six to nine months from now. Oh, and we may lateral another one of your peers into the remodeled office once it is done so we can remodel theirs. We’ll see how this goes. Well, I need to go talk to Professor Schultz, your new cubemate, so bye…”

Will the cubicle be in the men’s or lady’s room? 😉