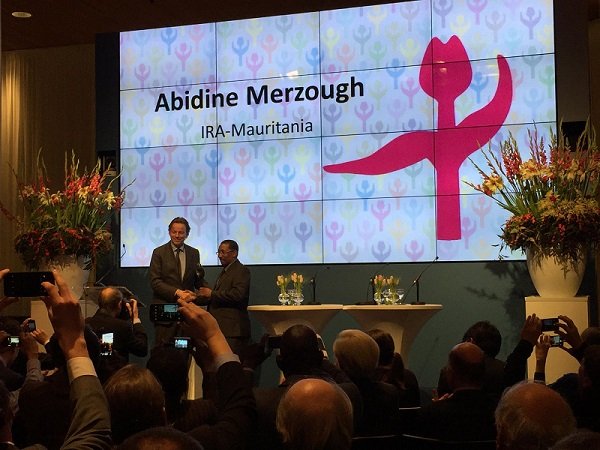 You may recall that in mid-September we reported on an effort by the left-wing Israeli “human rights” group B’Tselem to game the voting for the Dutch Human Rights Tulip Award.

The Tulip Award carried a 100,000 Euro bounty. Despite already having a massive budget, much of which is from European sources, B’Tselem went for the Award despite much needier and less well-endowed nominees for whom that money would have made a big impact.

B’Tselem is a darling of the  left because its job, like most foreign-funded NGOs, is to get up every morning to find something wrong with Israel and Israeli society. Those NGOs, who have a microscopic focus on Israel while turning a blind eye to Palestinian society, are a key part of the international propaganda war on Israel. This disproportionate scrutiny on Israel was justified by the Dutch Foreign Minister as appropriate because Israeli should be held to the same standards as European countries.

NGO Monitor is a prime source for information on this NGO-led propaganda campaign.

B’Tselem launched a campaign to get its supporters to vote in the online poll being run by Human Rights Tulip, from which three of the six final nominees would be selected. Three would be wild cards selected by the nominating committee.

Within Israel, the Tulip Prize became subject to public debate when an NGO nominee known as “B’Tselem” posted a Facebook message in Hebrew, encouraging its supporters to vote for “foreign funding to end the occupation.” Many Israelis, even those sympathetic to B’Tselem, understood that the post was an attempt by a narrow political group to antagonize opponents – making a mockery of the award and human rights activism.

NGO Monitor also noted the seeming impropriety of awarding 100,000 to an already well-funded group like B’Tselem:

In their online comments, many Israelis also noted the disparity and inequality between the various nominees, as exemplified by B’Tselem. Based in a democracy, there are no barriers to B’Tselem’s use of massive annual budgets to influence decision makers in government and media, and conduct mass social media campaigns. The €100,000 prize would be a fraction of its annual spending on political advocacy.

In sharp contrast, most of the other nominees from non-democratic regimes have meager resources and limited ability to mobilize social media. They lack B’Tselem’s international recognition. A €100,000 award would significantly improve their ability to operate as a human rights organization under repressive conditions.

B’Tselem got out to a big lead in the poll, but then there was a counter-campaign by Israelis critical of B’Tselem to get people to vote for others, including Phyoe Phoe Aung, a human rights activist in Myanmar.

B’Tselem and others screamed foul and made accusations about right-wing Israelis trying to undermine the vote. Here is what B’Tselem’s Executive Director tweeted: 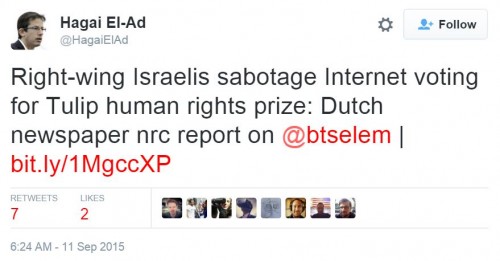 B’Tselem itself accused its opponents of being “occupation agents”: 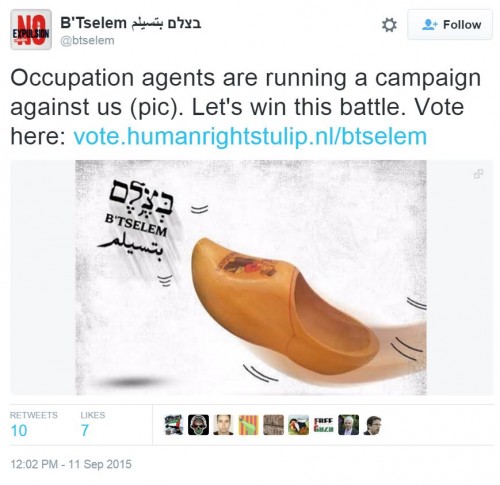 That was pretty cheeky considering B’Tselem had tried to game the vote from the get-go.

When the voting was over, B’Tselem was not even in the top 3. But B’Tselem was a wild card pick and made it to the list of six finalists.

Human Rights Tulip recently announced the Award, and it didn’t go to B’Tselem.

The 2015 Human Rights Tulip Award went to wild card pick IRA-Mauritania, an organisation from Mauritania that is working to abolish slavery:

Working both in Mauritania and at international level, IRA-Mauritania (Initiative for the Resurgence of the Abolitionist Movement in Mauritania) is drawing attention to the issue of slavery and supporting victims in building a new life. ‘IRA-Mauritania stands up for people who are marginalised and excluded, and in this way it makes an important contribution to the battle against slavery,’ said Mr Koenders. ‘That is why I have decided to award the Human Rights Tulip to this organisation this year.’

A group calling itself the Unrepresented Peoples Organization (UNPO) describes IRA-Mauritania as follows:

Mauritania criminalised slavery in the landmark 2007 Anti-Slavery Law. In spite of this criminalisation, slavery is still rife and about 20% of Mauritania’s 3.5 million residents are affected by such practices, mostly children from the ages of 8-20 and almost exclusively Haratin. Due to a persistent culture of denial among the ruling elites and authorities any attempts to raise awareness of the practice are stifled. IRA-Mauritania is on the forefront of the human rights struggle to combat this injustice and abolish all forms of slavery, sexual abuse and domestic servitude in Mauritania….

I don’t know much about IRA-Mauritania other than what is on the Human Rights Tulip and UNPO websites. But it sounds like a group which both was more deserving and needed the money.

The Israeli Arutz Sheva website reported on the role the internet played in opposing B’Tselem:

Lev Solodkin of the Center for Advancement of Israel-Europe Relations, who was also active in the anti-B’tselem campaign, said: “I believe that the organizers of the competition understood that the popular campaign to prevent B’tselem from winning reflected authentic frustration with a group that defines itself as being a human rights organization, but in fact only cares about one side’s rights.”

My Israel’s Sarah Ha’etzni told NRG that “the Israeli public showed that it knows how to fight resolutely and democratically against those who harm it all year long.”

She conveyed her group’s “condolences” to B’tselem, but noted that “we are sure they will be able to make up the lost money from one foreign government or another.”

When the internet wins, it’s often not in a good way. But in stopping B’Tselem from gaming the vote, the internet did good.

Speaking of human rights, I got an email from my brother extolling the virtues of a new Israeli invention with a link to this video.

This is starting a new weapons race! The first to create a de-skunker wins!

“I love the smell of skunk spray in the morning … it smells … it smells like Zionist victory.”

LOL! Hilarious. You gotta love the Israelis. Skunk spray. They couldn’t spray it on a nicer mire deserving people. Imagine a guy who considers Jews and Christians as children of monkeys, apes, and pigs saying that with this spray, Israel is treating Arabs like animals. That got a fat chuckle here. Those cretins should just give it up and move out.