Trump to Sisi: ‘Egypt has a great friend and ally in the US’ 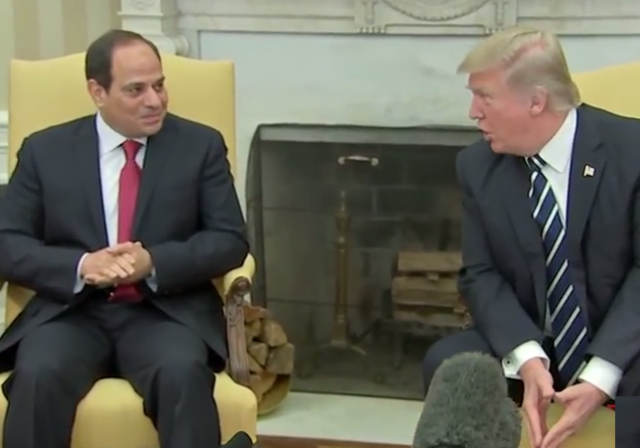 What a difference an election makes!

In late 2015, Egyptian President Abdel Fattah al-Sisi was one of the key heads-of-state participating in the United Nations General Assembly’s 70th meeting. Sisi, a supporter of Islamic reform and a leading terror-fighter, was snubbed by President Obama and did not receive an invitation to the White House.

Sisi was equally as gracious:

Sissi, who is making his first official visit to the White House, said he has a deep appreciation for Trump’s “unique personality” and praised Trump for “standing very strong in the counter terrorism field to counter this evil ideology.”

The official session was aimed at “rebooting” a bilateral relationship that had become strained under Obama’s neglect and courting by Russia’s President Vladimir Putin.

…At $1.3 billion a year, Egypt is the second-largest recipient of U.S. foreign aid, after Israel. In exchange, Egypt is one of the few Arab countries to maintain diplomatic ties with Israel and serves as a backstop control over the Palestinian Gaza Strip.

Planned budget cuts that would gut foreign aid may put some of Egypt’s money in danger, but administration officials said Egypt’s “security” will not be threatened.

“President Trump aims to reaffirm the deep and abiding U.S. commitment to Egypt’s security, stability and prosperity,” the administration official said, briefing reporters ahead of Monday’s meetings on condition he not be named, a common practice in government. “We are going to maintain a strong and sufficient level of support to Egypt and Jordan,” the official added.

President Trump will met with Jordan’s King Abdullah II later this week. Let’s hope that meeting goes as well as this one appears to have gone!