Then pulls ad after “unexpected” backlash 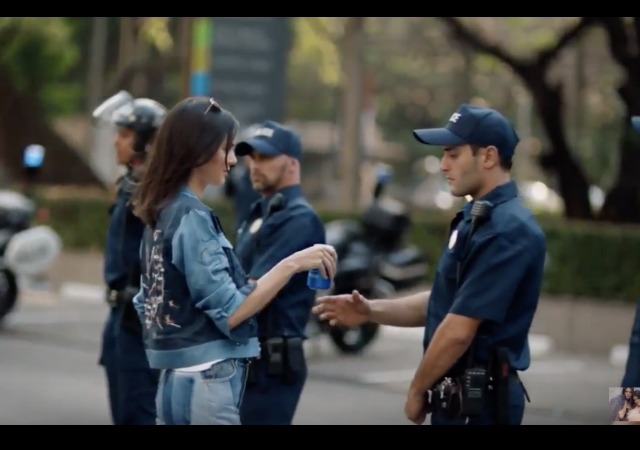 Controversial advertising is one of the best ways to earn media. Which seems to be what Pepsi was thinking when it released an ad with model Kendall Jenner, featuring police and protesters, intentionally reminiscent of Black Life Matters protests.

Wednesday, Pepsi pulled the ad after immense backlash from all ends of the political spectrum. The left complained the ad made light of the Black Lives Matters protests while conservatives whined it placed cops in a bad light.

In the ad, Jenner, who plays a model, stops mid-photo shoot to join a bunch of protesters galavanting around police officers. She decided to make peace by offering a Pepsi to one of the cops, who accepts it after a few seconds.

“Pepsi was trying to project a global message of unity, peace and understanding. Clearly we missed the mark, and we apologize,” a Pepsi spokesman said. “We did not intend to make light of any serious issue. We are removing the content and halting any further rollout. We also apologize for putting Kendall Jenner in this position.”

The Wall Street Journal reported that Networked Insights, a firm that looks into responses on social media, found the ad inspired 24% negative comments and 8% positive:

For an ad, 24% negative is extremely rare, said Jamie Brugueras, vice president of analytics at Networked Insights. In a typical year, only a handful of ads get this kind of negative response, he said.

If only Daddy would have known about the power of #Pepsi. pic.twitter.com/FA6JPrY72V

No worries, #PEPSI was just "trying to project a global message of unity, peace and understanding." Just like Ashley Judd and Madonna. ?

Susan Cantor at branding firm Red Peak explained that companies want to “stay relevant by tapping into the cultural zeitgeist.” She claimed that the ad did not work because Jenner doesn’t usually speak out on social issues:

“It’s an oversimplification of the issue and a dumbing-down of a serious conflict that is plaguing America today,” Ms. Cantor said. “It seems trite, frankly, for a beverage manufacturer to take this on, unless they’re going to take it head-on and take a position.”

Over at TIME, Daniel D’Addario made similar remarks:

If Pepsi were actually to make a commercial that dealt frankly and in a clear-eyed way with police violence, it would still be weird! They are a soda company. But it’d at least be an attempt at the conversation they claim to want, rather than an inauthentic cash-in on many people’s unhappiness. Pepsi’s ad fails not solely for its insensitivity but its overextension of that familiar thing, faux-wokeness to sell a product, past the point where it can be reasonably ignored.

Cantor and D’Addario also claimed that no one should be surprised Pepsi did this because it’s the cool thing to do now. Politicize all the things!

Look no further than this year’s Super Bowl. It seemed like every commercial had a political message meant to attack President Donald Trump.

Audi sparked a fire when it produced an ad based on the mythical gender wage gap. The company even admitted on Twitter that females employed at Audi receive pay based on their work just like the males:

When we account for all the various factors that go into pay, women at Audi are on par with their male counterparts.

Lumber 84’s commercial had to get a new ending, but the one produced shows a mother and daughter walking to the American border only to be stopped by a wall. The company’s CEO Maggie Hardy Magerko supported Trump, which caused mass confusion. She insisted the ad was not political:

“It was meant to call attention and to humanize this symbolic journey and show the hard work and determination that 84 Lumber has in all of their current employees, and what they’re looking for in new employees,” Hardy Magerko told the New York Times in an interview last week.

Pepsi and the critics still don’t “get it”. The problem isn’t the attempt to cash in on a bit of trendy politics; the problem is that Pepsi backed the wrong horse. Anyone who wants to sell gobs of stuff to the kind of Americans who are actually going to pay for it—rather than loot it—shouldn’t align himself with any group which glorifies shooting ambushes.

notamemberofanyorganizedpolicital in reply to tom swift. | April 6, 2017 at 10:27 am

Some of us have been avoiding all PepsiCo products (snack foods too) since last November/December.

Remember how PepsiCo’s hired help, er…., I mean CEO/President came out making crazy pronouncements then about their snowflake employees’ hurt feelings? (I believe that was it.)

I think that some of the best salespeople ever born are those who sell dumb ads to corporations. Even better than selling refrigerators to the Eskimos.

“Made light of the Black Lives Matter Program”….

The entire movements intellectual/philosophical value is somewhere around warm helium on a sunny day. I am so tired of this day to day crap.

I agree it would have been far better had we picked our own cotton and made our own sugar and to have left the Africans at home where they could enjoy all the perks of modern African medicine, tribal harmony, and read only those math, physics, chemistry and engineering texts that were written by Africans in their own language.

I am sorry our African-Americans are so suppressed by our racist policies that grant free housing, food, shelter, education and extra special districts shaped to assure they are represented by people like Maxine Waters and Keith Ellison.

Maybe they should try using Hitler as a spokesman.

Its not that Pepsi put cops in a bad light. They put the protesters in a too unrealistic good light. Where are the masked thugs attacking Trump supporters? Where are the bashed windows? Where is the flag burning? #Blm protesters do all these thing, but Pepsi ignored all of that and decided to go with a cheering, laughing diverse crowd.

Isn’t Indra Nooyi still the CEO? If you recall, she was infamous for her “fingers of the world” comparison of the countries of the world and coincidentally made America the middle finger after going through all the other countries. Sure, no message there. And don’t write it off to her being from the Indian subcontinent; she went to school here and fully knew the meaning of the middle finger.

“I think that some of the best salespeople ever born are those who sell dumb ads to corporations.”

But, this ad wasn’t sold to Pepsi, it was created and produced by Pepsi’s own in-house ad agency, “Creators League.”

The left complained……… while conservatives whined….