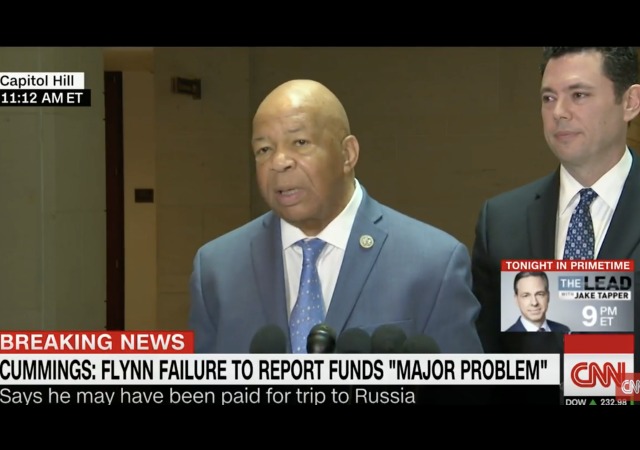 Chaffetz and Cummings reviewed classified military documents, which showed them that “Flynn did not ask permission or inform the government about payments he got for appearances before Russian organizations and for lobbying that helped Turkey’s government.

This raises concern whether Flynn violated a constitutional ban on foreign payments to retired military officers.

“The law requires him to seek permission … from the secretary of state and the Department of Defense,” Chaffetz said. “The response we’re getting [from those agencies] is there is no information, and that, we believe, is the potential violation.”

Chaffetz and Cummings said there was no evidence Flynn complied with federal law. They said Flynn could be criminally prosecuted, and they said Flynn should surrender the money he was paid.

Flynn received $45,000 “for a speech he gave to RT-TV in Russia.” Last month, ex-CIA Director James Moosley revealed that he attended a meeting with Flynn and Turkish foreign ministers to discuss removing Fehtullah Gulen, a Turkish cleric living in Pennsylvania, that President Recep Tayyip Erodogan has blamed for for many attempted coups.

Flynn offered to testify before the intelligence committees in Congress for their investigation into Russian interference in our election if official gave him immunity. The House and the Senate have not accepted the offer. Cummings said he would like it if Flynn testified, but “such a hearing appears unlikely.”

Chaffetz reiterated that the Russian interference investigation remains with the intelligence committee and the Oversight Committee plays “more of a support role.” He stated that he remains doubtful his committee “will call Flynn to testify.

The committee asked for documents and related items from the White House and Defense Department. The White House denied the request:

Legislative affairs director Marc Short said the committee is requesting documents that are not in possession of the White House because they involved Flynn’s activity prior to President Trump’s Jan. 20 inauguration. Other documents sought by the committee, from after Jan. 20, involve sensitive information, he said.

“It is unclear how such documents would be relevant to the stated purpose of the committee’s review, which according to your letter is to examine Lt. Gen. Flynn’s disclosure of payments related to activities that occurred in 2015 and 2016, prior to his service in the White House,” Short wrote in a letter dated April 19 that was sent to committee leaders.

Flynn resigned in February after news surfaced that he misled Vice President Mike Pence and others about talks he had with Russian Ambassador Sergey Kislyak about sanctions former President Barack Obama passed against Russian due to interference with our election.

there is a ban that retired military officers cannot accept payments…

so they actually HAVE go out and get such payments?

By the “Preponderance of Allegations” quasi-legal standard, and trial by media publicity, he’s guilty… of anything, everything, and something.

This is all about what Gen. Flynn has done. Why are we making this into a federal case about Trump? Look at all of the fundraisers that worked for hillary that are behind bars! Does that mean she was as crooked as they were? I simply do not understand what is going on with Chaffetz. Maybe it is time for him to spend more time with his family.

Trump admin is lucky to have cut ties so quickly.

Heh. I wouldn’t want to be stuck in a foxhole with you. 🙁

I believe Flynn just lumped all the payments for speeches together.

This isn’t meant to excuse it. But I don’t think he committed a crime. He apparently reported all his income.

“General Flynn briefed the Defense Intelligence Agency, a component agency of DoD, extensively regarding the RT speaking event trip both before and after the trip, and he answered any questions that were posed by DIA concerning the trip during those briefings.”

What is commonly called military retirement pay is actually a retainer fee. You are subject to recall your entire life, although to be perfectly honest you are not likely to be recalled after 10 years as your skills and physical abilities are perishable. You can lose it if you have been deemed by the government to have transfered your loyalty to a foreign government. But not if you you work for a foreign company.

A ton of expats (Philippines, anyone?) would be in a whole lot of trouble if this report was remotely true.

I believe that Russia Today is considered a company owned by the Russian government. Accepting that speech payment might have required congressional approval.

…and the Clintons walk free.

No Title of Nobility shall be granted by the United States: And no Person holding any Office of Profit or Trust under them, shall, without the Consent of the Congress, accept of any present, Emolument, Office, or Title, of any kind whatever, from any King, Prince, or foreign State.

Which words do you need explained?

“…from any King, Prince, or foreign State…”

If it’s illegal to accept foreign payments in general, as opposed to working for a “King, Prince, or foreign State” it’s going to be news to a h#ll of a lot of people including the USG.

A few thousand people at Boeing are going to be royally scr*wed if I’m wrong.

“The aircraft is jointly manufactured by Boeing and BAE Systems. The T-45A was selected to meet the US Navy requirement for an undergraduate jet pilot trainer to replace the TA-4J Skyhawk and T-2C Buckeye. The TA-4J was retired in 2003 and the T-2C in August 2008.”