Joy Villa Lost Friends Due to Her Pro-Trump Dress

Joy Villa Lost Friends Due to Her Pro-Trump Dress

But the dress helped boost her record sales. 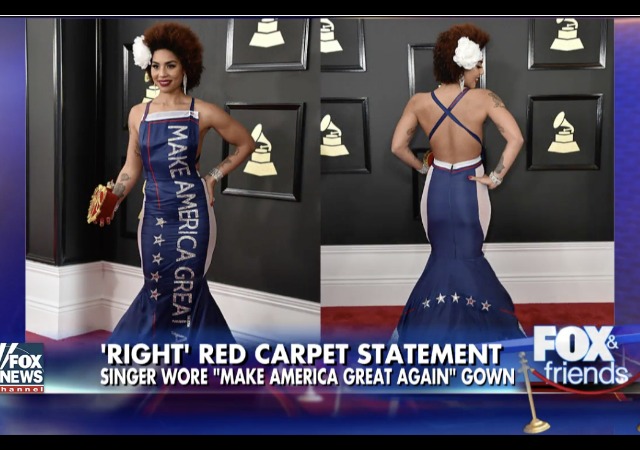 Singer Joy Villa turned heads when she wore a pro-Trump gown at the Grammys in February. Today she told Fox & Friends that she lost many friends because of the dress. From Fox News:

Joy Villa’s life has changed tremendously since the singer donned a pro-Trump dress at the 59th annual Grammy Awards.

Her “Make America Great Again” dress was the most talked about look at the awards show, even helping her albums sales skyrocket.

“Well, I now have millions of eyeballs on me so it’s incredible,” Villa said on “Fox & Friends” Monday. “It’s changed so much and for the better I have to say.”

However, it hasn’t been all positive changes for the 25-year-old singer.

“I’ve lost some friends of course, because now I’m outspoken about who I support and that’s our president,” she said. “For some people, that’s controversial. For me, it’s never been a doubt when I voted for him, I said, ‘This is my president [and] I’m going to stand by him.'”

Exactly what I was thinking.

If you loan a friend money/tell them you despise Hillary Clinton, and never see them again, it was money/time well spent.