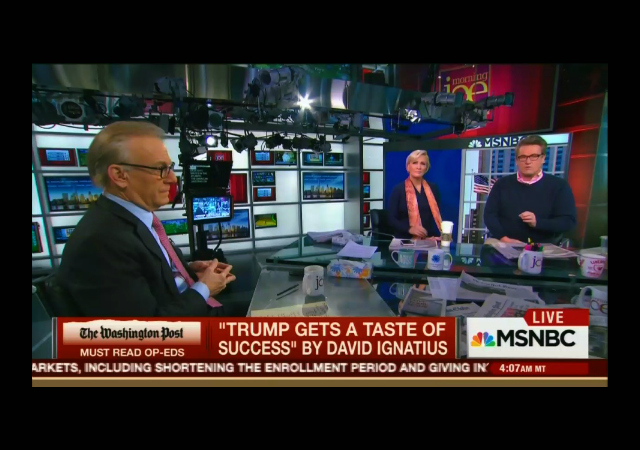 Looks like President Trump’s dropping of the MOAB might have had an even bigger impact on Morning Joe than it did on ISIS. In March, the show was in full Apocalypse Now mode about President Trump. Take this excerpt from my item of March 6th: “Joe and Mika waxed apocalyptic, claiming the country is ‘in crisis’ and questioning President Trump’s ‘stability.’ At one point, Mika even seemed to choke up as she said, ‘this is really a dark time which could get worse.’”

Cut to today, when, in the wake of foreign policy success on the Russia, China, Syria and Afghanistan fronts, Morning Joe‘s tone on President Trump has changed radically. There was praise across the board, from Joe, Mika and Willie, as well as from regular guests David Ignatius, John Heilemann and Mark Halperin.

Hmm: all of this MSM praise for President Trump. Should people in the president’s base be worried?

JOE SCARBOROUGH: We’ve all prepared for Trump the disaster. How do you handle Trump the success if we keep moving in this direction?

DAVID IGNATIUS: He’s also becoming a credible leader in foreign policy with a strong team, and I would say some real successes.

JOE: Ambassador McFaul [former ambassador to Russia], who’s long been a Trump critic, actually said “Vladimir Putin thought he had a dupe in the White House. Tonight, Vladimir Putin is scratching his head, going: what the hell do I do next?”

JOE: [Putin] is learning the same exact thing that Jeb Bush, and Marco Rubio and Ted Cruz and all of these people who thought they were so much smarter than dumb Donald Trump learned in the campaign.

MIKA BRZEZINSKI: Big picture, Willie, when we look at the week that was, and of course tomorrow’s Saturday, and you never know what could happen, but in this moment you see Trump actually following through on something he always said he would do, especially on the world stage. And that is, keep people guessing. And Russia is right there in the position to be most surprised.

WILLIE GEIST: [Trump] wants to go with people who are going to get him wins, which he appears to have gotten a couple of them on the foreign policy front this week.

JOHN HEILEMANN: Right, and I think for a lot of people, Willie, who are concerned about Donald Trump as Commander-in-Chief, certainly people on the left side of the political spectrum, but also a lot of people on the mainstream conservative side of the political spectrum, they look now at the notion, as John McCain said to us last week, that the biggest thing that he took out of the Syrian strike last Friday was, it looks like Donald Trump is listening to the generals, and that gives me cause for some degree of greater comfort and confidence.

MARK HALPERIN: Keeping people unsettled, but being willing to switch on a dime: that is the way Trump’s always been, and it’s worked this week on foreign policy.”

Why are people surprised Trump is listening to the generals? That’s what he hired them for. He didn’t say, do what I tell you to. He said develop a plan.

That’s what I thought – when asked, Trump avoided the obvious play of grabbing credit for the idea, and instead just said that he had given his military people the authority to carry these things out when they thought necessary. (amazing when a good answer is also the truth!)

And although the media didn’t explore this at all, I finally heard a good military reason why the MOAB was needed to deal with this tunnel complex – it was reported that ISIS had filled this complex with hidden IED’s, making it almost impossible for any special forces to enter without taking heavy casualties. One of the most significant effects of a bomb like the MOAB is that, like a nuke, it creates a huge over-pressure wave when it detonates. This over-pressure wave would travel throughout the tunnel system and cause all the IED’s inside to self-detonate – a very simple solution to the IED problem.

And probably a good reason why it’s safe to assume that there were many casualties, even deep inside the tunnels.

To wit: The idea is that if you have capable, knowledgeable underlings who understand the objective and have access to the necessary resources, there should be no need to explain to them how their jobs should be done.

We can probably assume that generals and admirals and other military brass know how to wage war. The very best thing to do, then, is to give them the tools they need and the authorization to use them…

… and then get out of the way.

(Funny story regarding that concept here. No, I didn’t write that. 😉 )

The WaPo had nice things to say. MSNBC seems to as well. Certainly signs of end-times

Blowing tings up often puts people in a jolly mood.

The United States was a much more fun place back before so many municipalities went all OSHA-lite on us and eliminated grandiose Fourth of July fireworks displays.

I have been surprised at how well DJT is playing the game I call “new kid on the block.” When I was a child, my family went through a period with a lot of moves, and found myself having to protect myself and my little brother in every new place. Generally, this meant winning a fight, sometimes with boys, sometimes with girls, sometimes with a gang.

Later, I found that, in every professional position I held, there would be some woman who decided that she was out to get me. My only option was to win this stupid game, so I did.

And, every new President in my experience has faced the same phenomenon. The difference is that everyone, from the press to the Democratic politicians to the Republican disloyalists, to a fraction of the intelligence community, to various nations to the Islamists, all think they are going to get a piece of him. He has obviously been expecting it.

notamemberofanyorganizedpolicital in reply to Valerie. | April 14, 2017 at 2:41 pm

How did you defeat those women bullies in professional positions?

As deadly as Obamacare then…….

More space wasted on, and unmerited attention to Morning Rino.

What difference does this guy make? – None. Rino Joe will be ‘soft’ on Trump when Trump does what the left wants, and ‘hard’ when he doesn’t.

So who needs this bozo’s insight on anything?

What’s going on here? I thought Trump was controlled by the Kremlin and they could blackmail him into doing what they want.