Mika chokes up: ‘a dark time which could get worse’ 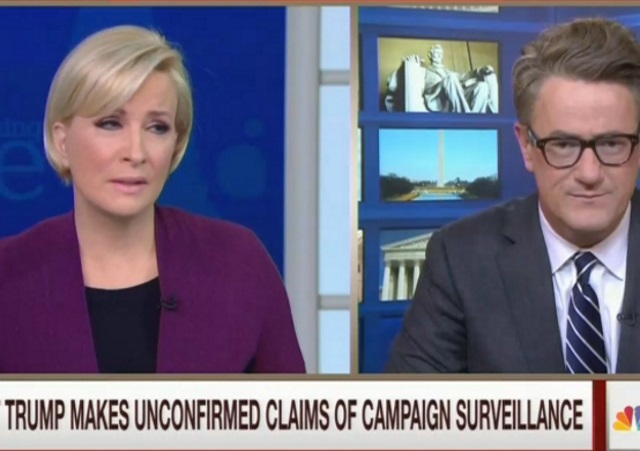 Morning Joe suffered a split personality today over President Trump’s tweets alleging that President Obama had tapped his phones. On the one hand, Joe and Mika waxed apocalyptic, claiming the country is “in crisis” and questioning President Trump’s “stability.” At one point, Mika even seemed to choke up as she said, “this is really a dark time which could get worse.”

But at the same time, Joe Scarborough zeroed in on former Obama spox Josh Earnest’s “very legalistic” responses to questioning by ABC’s Martha Raddatz. On This Week, Raddatz cited former Obama speechwriter Jon Favreau’s tweet, warning “I’d be careful about reporting that Obama said there was no wiretapping. Statement just said that neither he nor the WH ordered it.” Pressed by Raddatz, Earnest admitted “I don’t know” whether the Obama Justice Department sought and obtained a court-ordered wiretap of the Trump campaign.

Let’s put Morning Joe‘s hyperventilation aside for a moment. Readers will remember Salena Zito’s famous analysis of the election, to the effect that Trump supporters took him seriously, but not literally.

Could this be a case in which President Trump did something similar? By this theory, he took seriously the reports that the Obama admin had obtained wiretaps. And when he tweeted that President Obama wiretapped him, did he perhaps not literally mean that the former prez personally ordered the wiretap, but that it had happened on Obama’s watch, by initiative of the Justice Department, controlled by his hand-picked AG, Loretta Lynch?

Now these 2 morons know how we’ve felt the past 8 years.

The NY Times was reporting from anonymous sources with information obtained through wiretaps. Now they are saying they don’t exist. So all the information the Times reported was a lie?

Of course, all the information the Times ever reports is lying propaganda.

notamemberofanyorganizedpolicital in reply to PhillyGuy. | March 6, 2017 at 12:55 pm

As usual, an absolutely meaningless statement. It sounds better than raging that Trump is a “poopy-head”, but is similarly content-free.

Lynch could lose some her tonnage at Club Fed.

These two idiots lament the decline of the USA and criticize President Trump for the decline. It was President Trump who was wire tapped !!! And it was their hero Obama who did it! These liberals are sick to the core. I can’t even watch television news anymore, network or cable, friend or foe. Fox News has become unwatchable – they have that airhead Marie Harf on as a contributor now! She’s the Obama/Clinton idiot that said ISIS would be better behaved if they had more job opportunities. She is a professional propagandist and Fox News hired her.

I’m sure they view it as dark times. They’ve never witnessed a Republican White House whose occupants punch quite this hard, this often, and do it very publicly. Trump is certainly the cause of the instability in DC, but that doesn’t mean Trump himself is unstable. Questioning Trump’s sanity is just a weak response of the Dem’s and MSM’s continued inability to comprehend why they lost an election. Despite being the jaded opportunists that they are, I question whether most of the Republicans in DC are smart enough to leverage this new combativeness to put the Democrats further back on their heels. This new style of hyper-aggressive engagement seems to be making many of them very uncomfortable.

The MSM ignored all the shenanigans during two terms of the Chicago Way and now Trump is offering them a chance to participate in the coverup as well. None of those DC creatures really want the exposure of daylight on their recent past, so I wonder how much more hostility it will take before a new detente settles in. That’s when we need to worry.

This political street theater plays well with their target audience, the Behar/Whoopie ankle biters who already have their mantra down. Somewhere ex-KGB operatives are laughing at how useful the useful idiots can be.

Okay, this girl has nice hair and nice skin…. Other than that, why do we care what she says?

Turn off the camera, and all will be well in her world.

But she has that pitiful look that says the batteries in her best friend are depleted.

The house of cards which has been built against Trump is collapsing.

It is likely that these wiretaps did exist. And, it is entirely possible that some calls from members of Trump’s transition team to representatives of the Russian government were intercepted [Gen. Flynn comes to mind]. It is also likely that the reporting on the applications for and the granting of an FISA warrant are also accurate. And, it is unlikely, though possible, that Barack Obama directly ordered or authorized the surveillance [most likely this was done through cut-outs as happened in the Clinton server investigation].

It is also very likely that the existence of the surveillance was brought to the attention of President-elect Trump by Adm. Mike Rogers on 11/17/2016 when he met with Trump at Trump tower. But, at that time, the dissemination of NSA intercept information was severely limited, usually to the NSA, the authorized agency requesting the information and the WH/President. That all changed in 1/2017 when outgoing President Obama issued the executive order relaxing the rules for dissemination of intercepted information significantly.

The Obama administration had some cover, when it was “leaked” that Flynn spoke with the Russian ambassador on 12/29/2016, because it could be claimed that the information was gleaned by an intercept of the ambassador’s communications. And, this would be a reasonable assumption, given the fact that there was no public knowledge, or even claim, of the existence of intercepts on Trump and his team. But, now that it has been “leaked” that intercepts on the Trump team existed, during this period, Clapper, Comey and other bigwigs in the intelligence community are doing serious CYA work. Clapper is denying any knowledge of any intercepts [unlikely if they occurred, but it is interesting to watch him channel Sgt. Schultz from Hogan’s Heroes none the less]. Comey is begging the DOJ to give he and the FBI cover for the intercepts, as though they exist. Even several Democrat politicians, who have been steadfastly maintaining that Trump and his campaign were in bed with the Russian government are frantically back pedaling saying, publicly, that no evidence exists that any collusion occurred. But, they still want an “investigation” [read: show trial] to make sure no collusion occurred. Revealing, disseminating and possessing secret information is a serious crime in this country. And these people all know it.

Now, the media’s beloved leader, Barack Obama is squarely in the cross hairs. And, they can not control the flow of information. Obama had one of the least transparent administrations in history. They covered for him when he refused to release his birth certificate, his school records and passport history. All of which would directly impact his identity and his qualifications for the office. They covered for him during the myriad scandals that his administration was involved in. They ignored many activities which were improper and, possibly, even illegal. But, now they face a Presidential administration which routinely circumvents the media and is aggressive in its own defense. A wiretap incident brought down the Nixon administration and it could do the same to the former Obama administration. So, the msm is melting down and the rats are running for cover.

It came out tonight on Bill O’Reilly, Newt Gingrich reminded Bill that the intercepted call of Flynn and the Russian Ambassador happened in Trump Tower on Trumps phone!

BTW, I agree with, think it was Kurt Schlicter, who wrote a couple of weeks ago he doesn’t care if Trump is lying about (fill in the blank).

The left has so beaten up on normal Americans, speaking for myself, I hope Trump does whatever he wants to do, as long as he’s keeping his promises to Americans that elected him. Dance with the one that brung you.

notamemberofanyorganizedpolicital in reply to Close The Fed. | March 6, 2017 at 1:01 pm

RE: “The left has so beaten up on normal Americans…”
AND “BULLIED” might I add.

The Leftists are always immoral Bullies.

Joe and Mika the drama queens are in another melt down mode.

The Obama administration was up to no good and we all know it.
Slowly the truth will come out.

If it is determined that the obama administration did indeed tap/hack into Trump’s team or campaign then the levels of denials will begin. It will be at the bottom level first that will say they were ordered to do it. Then the level that says it was only following the protocol set up by the first group. etc, etc, etc. But it will NEVER get to the obama “Ordered” it level. Just like in hillary’s case at State, no one there ever had their heads roll or for that matter even a public reprimand. Now if it were under a Republican admin, then all of the lower levels would be dismissed as only following orders and the blame would go right to the top! I hate to say it but if written/photographic evidence is found that obama’s team did this, it won’t matter to the msm.

If Obama admitted it on national television, the VLSM would ignore it.

Mika needs to stay away from Maxine Waters and Nany Pelosi, if she desires to retain what sanity and common sense might still be within her.

Not sure Mika ever had any real sanity.
Pretty sure common sense is something she thinks she gets back from the barista at the corner coffee shop.

So the failure to roll over and play dead under the media attack is a sign of insanity. They fail to see that it is a fight that we want.